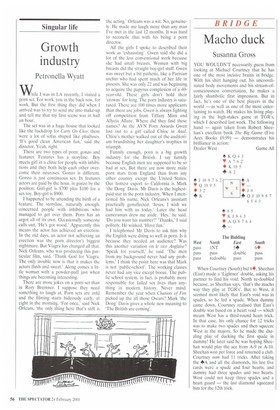 The set was in a huge house that looked like the backdrop for Carry, On Cleo; there were a lot of sofas shaped like phalluses. 'It's good clean American fun,' said the director. Yeah. right

I telephoned Mr Davis to ask him why the English were doing so well in porn. Is it because they needed an audience? Was this another variation on le vice Anglaise? 'Speak for yourself,' he said. 'The men from my background never had any problems.' I think the point here was that Mark is not 'public-school'. The working classes never had any vice except booze. The public school system, in fact, is probably more responsible for failed sex lives than anything in modern history. Never mind. Remember the year when Chariots of Fire picked up the all those Oscars? Mark 'the Dong. Davis gives a whole new meaning to 'The British are coming'.