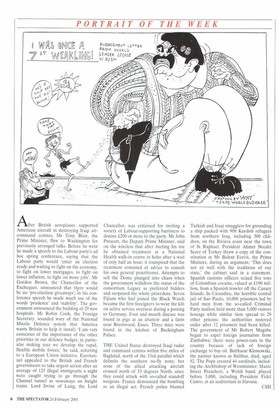 centres, Mr Tony Blair, the Prime Minister, flew to Washington for previously arranged talks. Before he went he made a speech to the Labour party's ad hoc spring conference, saying that the Labour party would 'enter an election ready and waiting to fight on the economy, to fight on lower mortgages, to fight on lower inflation, to fight on more jobs'. Mr Gordon Brown, the Chancellor of the Exchequer, announced that there would be no 'pre-election giveaways'; in his conference speech he made much use of the words 'prudence' and 'stability'. The government announced the building of 29 new hospitals. Mr Robin Cook, the Foreign Secretary, sounded wary of the National Missile Defence system that America wants Britain to help it install; 'I am very conscious of the importance of the other priorities in our defence budget, in particular making sure we develop the rapid, flexible mobile forces,' he said, referring to a European Union initiative. Eurotunnel appealed to the British and French governments to take urgent action after an average of 125 illegal immigrants a night were caught trying to go through the Channel tunnel as stowaways on freight trains. Lord Irvine of Lairg, the Lord

Chancellor, was criticised for inviting a society of Labour-supporting barristers to donate £200 or more to the party. Mr John Prescott, the Deputy Prime Minister, said on the wireless that after hurting his toe he obtained treatment at a National Health walk-in centre in Soho after a wait of only half an hour; it transpired that the treatment consisted of advice to consult his own general practitioner. Attempts to sell the Dome plunged into chaos when the government withdrew the status of the consortium Legacy as preferred bidders and reopened the whole procedure. Seven Fijians who had joined the Black Watch became the first foreigners to wear the kilt on active service overseas during a posting to Germany. Foot and mouth disease was found in pigs at an abattoir and a farm near Brentwood, Essex. Three mice were found in the kitchen of Buckingham Palace.

THE United States destroyed Iraqi radar and command centres within five miles of Baghdad, north of the 33rd parallel which delimits the southern no-fly zone; but none of the allied attacking aircraft crossed north of 33 degrees North, since they could attack with so-called standoff weapons. France denounced the bombing as an illegal act. French police blamed Turkish and Iraqi smugglers for grounding a ship packed with 908 Kurdish refugees from northern Iraq, including 300 children, on the Riviera coast near the town of St Raphael. President Ahmet Necdet Sezer of Turkey threw a copy of the constitution at Mr Bulent Ecevit, the Prime Minister, during an argument; 'This does not sit well with the traditions of our state,' the cabinet said in a statement. Spanish customs officers seized five tons of Colombian cocaine, valued at £190 million, from a Spanish trawler off the Canary Islands. In Carandiru, the horrible central jail of Sao Paulo, 10,000 prisoners led by hard men from the so-called Criminal Party mafiosi held more than 5,000 visitors hostage while similar riots spread to 29 other prisons; the authorities restored order after 12 prisoners had been killed. The government of Mr Robert Mugabe began to expel foreign journalists from Zimbabwe; there were power-cuts in the country because of lack of foreign exchange to buy oil. Balthasar Klossowski, the painter known as Balthus, died, aged 92. The Pope created 44 cardinals, including the Archbishop of Westminster. Manic Street Preachers, a Welsh band, played before 5,000, including President Fidel Castro, at an auditorium in Havana.