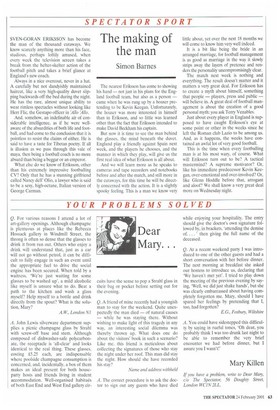 The making of the man

SVEN-GORAN ERIKSSON has become the man of the thousand cutaways. We know scarcely anything more than his face, studious, perhaps loftily amused, when every week the television screen takes a break from the helter-skelter action of the football pitch and takes a brief glance at England's new coach.

Always in a nice overcoat, never in a hat. A carefully but not dandyishly maintained haircut, like a very high-quality duvet slipping backwards off the bed during the night. He has the rare, almost unique ability to wear rimless spectacles without looking like Herr Flic, the Gestapo officer in 'Alio 'Ala.

And, somehow, an indefinable air of considerable intelligence, as if he were wellaware of the absurdities of both life and football, and had come to the conclusion that it is pointless to resist the claims of either. He is said to have a taste for Tibetan poetry. If all is illusion as we pass through this vale of maya, then being a football coach is no more absurd than being a beggar or an emperor.

What else do we know of Eriksson, other than his extremely impressive footballing CV? Only that he has a stunning girlfriend called Nancy dell' Olio, a lawyer who is said to be a sexy, high-octane, Italian version of George Carman. The nearest Eriksson has come to showing his hand — not just in his plans for the England football team, but also as a person — came when he was rung up by a hoaxer pretending to be Kevin Keegan. Unfortunately, the hoaxer was more interested in himself than in Eriksson, and so little was learned other than the fact that Eriksson intended to make David Beckham his captain.

But now it is time to see the man behind the glasses, the mind beneath the duvet. England play a friendly against Spain next week, and the players he chooses, and the manner in which they play, will give us the first real idea of what Eriksson is all about.

And we will learn more as he speaks to cameras and tape recorders and notebooks before and after the match, and still more in the cutaways, for this time he will be directly concerned with the action. It is a slightly spooky feeling. This is a man we know very little about, yet over the next 18 months we will come to know him very well indeed.

It is a bit like being the bride in an arranged marriage, for football management is as good as marriage in the way it slowly strips away the layers of pretence and renders the personality uncompromisingly clear.

The match next week is nothing and everything. The result doesn't matter and it matters a very great deal. For Eriksson has to create a myth about himself, something that people — players, press and public — will believe in. A great deal of football management is about the creation of a good personal myth: you ask Terry Venables.

Just about every player in England is supposed to have caught Eriksson's eye at some point or other in the weeks since he left the Roman club Lazio to be among us. And, as it happens, the weeks have contained an awful lot of very good football.

This is the time when every footballing man is at his most wary, of course. What will Eriksson turn out to be? A tactical mastermind? A supreme motivator? Or, like his immediate predecessor Kevin Keegan, over-emotional and over-involved? Or, like Glenn Hoddle before that, arrogant and aloof? We shall know a very great deal more on Wednesday night.