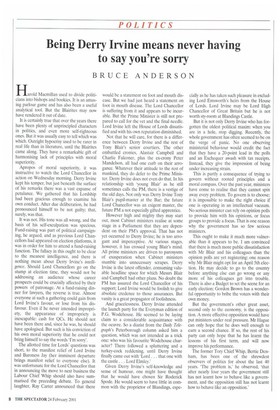 Page 8, 24 February 2001 — Being Derry Irvine means never having to say you're sorry
Close

Being Derry Irvine means never having to say you're sorry

Harold Macmillan used to divide politicians into bishops and bookies. It is an amusing parlour game and has also been a useful analytical tool. But the Blairites may now have rendered it out of date.

It is certainly true that over the years there have been plenty of unprincipled characters in politics, and even more self-righteous ones. But it was usually easy to tell which was which. Outright hypocrisy used to be rarer in real life than in literature, until the Blairites came along. They have a remarkable gift of harmonising lack of principles with moral superiority.

Apropos of moral superiority, it was instructive to watch the Lord Chancellor in action on Wednesday morning. Deny Irvine kept his temper, but just beneath the surface of his remarks there was a vast expanse of petulance. We gathered that his Lordship had been gracious enough to examine his own conduct. After due deliberation, he had pronounced himself to be not guilty; that, surely, was that.

It was not. His tone was all wrong, and the basis of his self-exculpation was specious. Fund-raising was part of political campaigning, he argued, and as previous Lord Chancellors had appeared on election platforms, it was in order for him to attend a fund-raising function. The fallacy in this ought to be clear to the meanest intelligence, and there is nothing mean about Deny Irvine's intelligence. Should Lord Chancellors go on the stump at election time, they would not be addressing an audience whose career prospects could be crucially affected by their powers of patronage:At a fund-raising dinner for lawyers, the reverse is true. Almost everyone at such a gathering could gain from Lord Irvine's favour, or lose from his disfavour. Even if he never intended impropriety, the appearance of impropriety is inescapable: cash for QCs. He should not have been there and, since he was, he should have apologised. But such is his conviction of his own moral superiority that he could not bring himself to say the words 'I'm sorry'.

The allotted time for Lords' questions was short, to the manifest relief of Lord Irvine and Baroness Jay (her imminent departure brings manifest relief to everyone else). It was unfortunate for the Lord Chancellor that in announcing the move to next business the Labour Chief Whip should also have summarised the preceding debate. To general laughter, Ray Carter announced that there would be a statement on foot and mouth disease. But we had just heard a statement on foot in mouth disease. The Lord Chancellor is suffering from it and appears to be incurable. But the Prime Minister is still not prepared to call for the vet and the final needle. Lord Irvine left the House of Lords dissatisfied and with his own reputation diminished.

Not that he will care, for there is a difference between Derry Irvine and the rest of Tony Blair's senior courtiers. The other embattled cronies, Alastair Campbell and Charlie Falconer, plus the ex-crony Peter Mandelson, all had one curb on their arrogance. Whatever their attitude to the rest of mankind, they do defer to the Prime Minister. Deny Irvine does not even do that. In his relationship with `young Blair' as he still sometimes calls the PM, there is a vestige of the old days. Not only was Deny Irvine Tony Blair's pupil-master at the Bar; the future Lord Chancellor was an exigent master, the future PM a not especially gifted apprentice.

However high and mighty they may start out, most Cabinet ministers realise at some stage in a Parliament that they are dependent on their PM's approval. That has not yet occurred to Deny Irvine; he is too arrogant and imperceptive. At various stages, however, it has crossed young Blair's mind. All prime ministers are driven to paroxysms of exasperation when Cabinet ministers stumble into unnecessary scrapes. Deny Irvine is the latest offender, consuming valuable headline space for which Messrs Blair and Campbell had other plans. No doubt the PM has assured the Lord Chancellor of his support; Lord Irvine would be foolish to give absolute credence to those assurances. But vanity is a great propagator of foolishness.

And gracelessness. Deny Irvine attended the launch party for the Everyman edition of P.G. Wodehouse. He seemed to be laying claim to a considerable acquaintance with the oeuvre. So a diarist from the Daily Telegraph's Peterborough column asked him a question, which was not intended as a trick one: who was his favourite Wodehouse character? There followed a spluttering and a turkey-cock reddening, until Deny Irvine finally came out with 'Lord.. . that one with the castle. . . Lord Elmley.'

Given Deny Irvine's self-knowledge and sense of humour, one might have thought that he would have chosen Sir Roderick Spode. He would seem to have little in common with the proprietor of Blandings, espe cially as he has taken such pleasure in excluding Lord Emsworth's heirs from the House of Lords. Lord Irvine may be Lord High Chancellor of Great Britain but he is not worth sty-room at Blandings Castle.

But it is not only Derry Irvine who has forgotten the oldest political maxim: when you are in a hole, stop digging. Recently, the whole government has often seemed to be on the verge of panic. No one observing ministerial behaviour would credit the fact that they have a 20-point lead in the polls and an Exchequer awash with tax receipts. Instead, they give the impression of being under increasing strain.

This is partly a consequence of trying to govern without rooted principles and a moral compass. Over the past year, ministers have come to realise that they cannot spin away every problem. To govern is to choose; it is impossible to make the right choice if one is operating in an intellectual vacuum. No serious minister can rely on opinion polls to provide him with his opinions, or focus groups to provide a focus. That is one reason why the government has so few serious ministers.

This ought to make it much more vulnerable than it appears to be. I am convinced that there is much more public dissatisfaction with Mr Blair and his colleagues than the opinion polls are yet registering:. one reason why Mr Blair might opt for an April 5th election. He may decide to go to the countty before anything else can go wrong or any more of his colleagues get into trouble. There is also a Budget to set the scene for an early election; Gordon Brown has a wonderful opportunity to bribe the voters with their own money.

But the government's other great asset, second only to the economy, is the opposition. A more effective opposition would have put ministers under real pressure. Mr Hague can only hope that he does well enough to earn a second chance. If so, the rest of his party can only hope that he has learnt the lessons of his first term, and will now improve his performance.