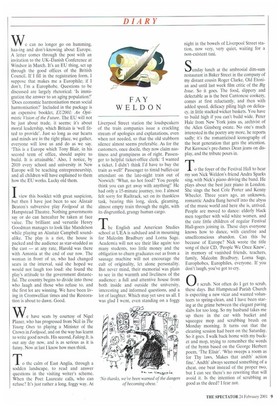 W e can no longer go on humming, haa-ing and don't-knowing

about Europe. A letter comes through the post with an invitation to the UK–Danish Conference at Windsor in March. It's an EU thing, set up through the good offices of the British Council. If I fill in the registration form, I suppose that makes me a Europhile; if I don't, I'm a Europhobe. Questions to be discussed are largely rhetorical: 'Is immigration the answer to an aging population?' 'Does economic harmonisation mean social harmonisation?' Included in the package is an expensive booklet, EU2001: An Optimistic Vision of the Future. The EU will not be just about trade, it seems; it's about moral leadership, which Britain is 'well fitted to provide'. Just so long as our hearts and minds are in the right place, we gather, everyone will love us and do as we say. 'This is a Europe which Tony Blair, in his second term of office, should aspire to build. It is attainable.' Also, I notice, by 2010 every school and university in New Europe will be teaching entrepreneurship, and all children will have explained to them how the EU works. Lucky old them.

Iview this booklet with great suspicion, but then I have just been to see Alistair Beaton's subversive play Fee/good at the Hampstead Theatre. Nothing governments say or do can hereafter be taken at face value. The brilliant and versatile Henry Goodman manages to look like Mandelson while playing an Alastair Campbell soundalike. The play is a riot, the house is packed and the audience as star-studded as the cast — at any rate, Harold was there with Antonia at the end of our row. The woman in front of us, who had changed seats in the interval, said she hoped we would not laugh too loud: she found the play's attitude to the government distasteful. The country begins to divide into those who laugh and those who refuse to, and the first lot are winning. We have been living in Cromwellian times and the Restoration is about to dawn. Good.

We have seats by courtesy of Nigel Planer, who has progressed from Neil in The Young Ones to playing a Minister of the Crown in Feelgood, and on the way has learnt to write good novels. His second, Faking It, is out any day now, and is as serious as it is funny. Now at last I know how men think.

To the calm of East Anglia, through a sodden landscape, to read and answer questions in the visiting writer's scheme. When the Poet Laureate calls, who can refuse? It's just rather a long, foggy way. At

Liverpool Street station the loudspeakers of the train companies issue a crackling stream of apologies and explanations, even when not needed, so that the old stubborn silence almost seems preferable. As for the customers, once docile, they now claim nastiness and grumpiness as of right. Passenger to helpful ticket-office clerk: 'I wanted a ticket, I didn't think I'd have to buy the train as well!' Passenger to timid buffet-car attendant on the late-night train out of Norwich: 'What, no hot food? You people think you can get away with anything!' He had only a 15-minute journey, too. I almost felt sorry for Railtrack, set on its thankless task, bearing this long, sleek, gleaming, almost empty train through the night, with its disgruntled, grungy human cargo.

The English and American Studies school at UEA is subdued and in mourning for Malcolm Bradbury and Lorna Sage. Academia will not see their like again: too many students, too little money and the obligation to churn graduates out as from a sausage machine will not encourage the cult of originality, let alone personality. But never mind, their memorial was plain to see in the warmth and liveliness of the audience: a full and attentive house from both inside and outside the university, interesting and informed questions, and a lot of laughter. Which may yet save us all. I was glad I went, even standing on a foggy

Sunday lunch at the ambrosial dim-sum restaurant in Baker Street in the company of my distant cousin Roger Clarke, Old Etonian and until last week film critic of the Big Issue. So it goes. The food, slippery and delectable as is the best Cantonese cookery, comes at first reluctantly, and then with added speed, delicacy piling high on delicacy, in little stacked wicker baskets. You have to build high if you can't build wide. Peter Hale from New York joins us, archivist of the Allen Ginsberg estate. No one's much interested in the poetry any more, he reports sadly; it's the romanticised iconography of the beat generation that gets the attention. Put Kerouac's pre-James Dean jeans on display, and the tribute pours in.

To the foyer of the Festival Hall to hear my son Nick Weldon's friend Andra Sparks sing, with Nick's piano driving the band. He plays about the best jazz piano in London. She sings the best Cole Porter and Kenny Wheeler. Three years ago, an unknown, romantic Andra flung herself into the abyss of the music world and here she is, arrived. People are moved to dance: elderly black men together with wild white women, and the cute little children of regular Festival Hall-goers joining in. These days everyone knows how to dance, with carefree and unselfconscious abandon. Can this be because of Europe? Nick wrote the title song of their CD, 'People We Once Knew', in memory of vanished friends, teachers, family, Malcolm Bradbury, Lorna Sage, Europhobes, Europhiles, everyone. If you don't laugh, you've got to cry.

Or scrub. Not often do I get to scrub, these days. But Hampstead Parish Church is expecting a new vicar and wanted volunteers to spring-clean, and I have been staring at the grime between the elegant paving slabs for too long. So my husband takes me up there in the car with bucket and squeegee mop and scrubbing brush on Monday morning. It turns out that the cleaning session had been on the Saturday. So it goes. I walk back home with my bucket and mop, trying to remember the words of the hymn based on the George Herbert poem, 'The Elixir'. 'Who sweeps a room as for Thy laws, Makes that andth' action fine.' Andth' always seemed something of a cheat, one beat instead of the proper two, but I can see there's no rewriting that will avoid it. Is the intention of scrubbing as good as the deed? I fear not.