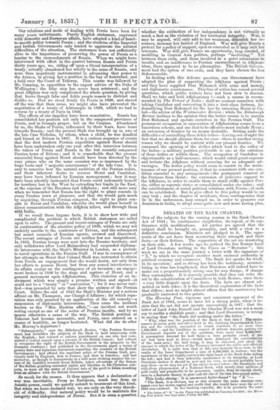 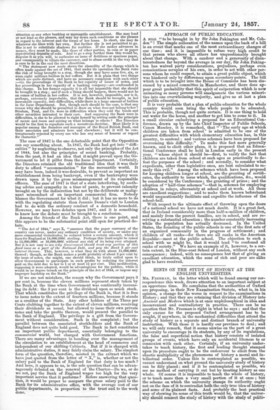 DEBATES ON THE BANK CHARTER.

ONE of the subjects for the coming session is the Bank Charter Act of 1844; its continuance simplieiter, its repeal, or its continuance with modifications. All parties are agreed that the subject shall be brought on, promptly, and with a view to a definitive conclusion. Ministers are pledged to it. The opponents of the act have been mustering their strength and their facts—or their fictions. The supporters of the not are mustering on their side. A few weeks ago we noticed the fine Roman hand of Lord Overstone writing in the Times as " Mercator " ; this week we see in the same journal a letter with the signature of "X," in which we recognize another most eminent authority in political economy and commerce. The Bank Act speaks for itself, in its operation ; and so strong has been the testimony, accumu-' lating as time has lengthened, that Ministers will indeed have to make out a proportionately strong case for any change, if change they contemplate. It is scarcely possible that they can refer tho act to the consideration of Committees in both Houses, since there

s very little dispute upon the facts. The facts arc almost admitted on both sides ; it is the theoretical explanation of the facts that differs ; ■and we might almost affirm that the controversy hint gradually narrowed to two points.

The Morning Post, vigorous and consistent opponent of the Bank Act of 1844, seems to have hit a strong .point, when it in sists sists that the act did not operate successfully 1847 ; that the letter of Lord John Russell and Sir Charles Wood was not a mere sop to soothe a childish panic ; and that Lord Overstono is wrong in saying that "the Bank did nothing under the letter." "Why, what was the position of the Bank at that date? The entire reserve in notes, gold, and silver held in the Banking Department in London and the country,. amounted in round numbers to no more than 1,600,000/. ; and the liabilities in respect of private deposits, putting the Government deposits out of the question, -were more than 600,000/. A peremptory demand for half these—a very probable even it the act had been kept in force—would have destroyed the convertibility of the bank-note; the half being, it may be observed, just about the amount to which the letter of the Treasury increased the active and efficient circulation. It is quite true that at this very moment there were in the vaults of the Issue Department a sum of 8,600,0001. in bullion ; but the machinery of the act rigidly restricts the right hand of the Bank from aiding the left ; and bad it been inflexibly maintained in its integrity, as Lord Overstone desires it should be now and for ever, we should probably have seen then—as we may see yet if his advice be now taken—the disastrous and ridiculous phenomenon of a National Bank, with nearly nine millions of gold really and practically in its possession, unable, from its slavish obedience to a fantastic theory, to give cash for one of its own tive•pound notes." This looks strong: it is answered beforehand by "X "- " The Bank, it is obvious, has at this moment the same absolute command over her entire capital and credit that she would have were the act of 1844 non-existent. In her banking capacity, she is in precisely the same • The letter of" X" in the Times was published on Tuesday the 20th; the Morning Post article two days later, Friday the 22d. situation as any other banking or mercantile establishment. She may lend or not lend as she pleases and may lay down such conditions as she pleases in regard to the interest ;Ind the terms of her loans. In short, she may do whatever she likes with her ow-n. But further she is not permitted to go. She is not to substitute shadows for realities. If she makes advances in money, they must be made, like those of other parties, in coin or in paper representing deposits of coin. And to go a step further than this would be, disguise it as you will, to authorize an issue of fictitious or spurious paper, and consequently to vitiate the currency, and to abuse credit in the way that is sure to be in the end the most disastrous. "The statement now made shows the absurdity of the charge which is often made against the act of 1844, that under its operation the Bank runs the risk of being brought to a stop, though she may have some five, six, or even eight millions bullion in her coffers. But it is plain that two things which are quite distinct, and have no necessary connexion with each other —viz, the proceedings of the Bank in her capacity of issuer of notes, and her proceedings in her capacity of a banking company—are confounded in this charge. In her former capacity it is all but impossible that she should be brought to a stop; and if such a thing should happen, there would not be an ounce of bullion in her coffers. It is not, however, impossible, nor is it, perhaps extremely improbable, that the Bank should be brought, in her mercantile capacity, into difficulties, while there is a large amount of bullion in the Issue Department. But, though such should be the case, is that any reason why she should be permitted to draw on what does not belong to her. Strahan, Paul, and Co. were in difficulties when they sold the bonds and other securities intrusted to their care. And supposing the Bank were in difficulties, is she to be allowed to right herself by setting aside the principle of meum and //lam and seizing on what belongs to others ? Her Directors would be the first to repudiate such a monstrous doctrine. Most likely it is popular among the founders and managers of the Royal British Bank, and their associates and admirers here and elsewhere ; but it will be contemptuously rejected by every one who has any sense of honour or regard for character."

The case of 1847 is the one debateable point that the Opposition can say something about. In 1847, the Bank had got into " difficulties ' by neglecting to observe, not only the principles of the Act of 1844, but also the principles of sound banking. Probably, from the past, it had an idea that it might prevail upon the Government to let it pilfer from the Issue Department. Certainly:, the Directors retained the old. traditional idea that it was their duty to afford " accommodation " for the mercantile world. It may have been indeed it was desirable, to prevent so important an

establishment been, being bankrupt, even if the bankruptcy were drawn upon it by the gross mismanagement of its responsible officers. The case of 1847 is that of a state interfering, by soothing advice and sympathy in a time of panic, to prevent calamity, brought on by the indiscretion but not by the deliberate or malignant misconduct of an important commercial firm. Nobody blames the Government for what it did.; but it has no more to do with the regulating statute than Jeannie Deans's visit to London had to do with the ordinary conduct of a domestic household. However, we may have debates upon 1847, and it is something to know how the debate must be brought to a conclusion.

Among the friends of the Bank Act, there is one point, and this appears to be the substantial point still open for practical debate.

"The Act of 1844," says X, "assumes that the paper currency of the country can never, under any ordinary condition of society, or under any mere commercial vicissitudes, be reduced below a certain amount, which it fixes for England at 14,000,0661. sterling. Perhaps this limit might be raised to 15,000,0001. or 16,000,0001. without any risk of its being ever attained. But it is not easy to see why Government should treat any portion of this j.l.ved issue as a part of the National .Debt, and pay the Bank 3 per cent Interest thereon. This, however, is what they do with about 11,000,000/. thereof; though, as the Bank makes a profit probably of about 3 per cent by the issue of notes, she might, one should think, be fairly called upon to allow Government to participate in such profits by reducing the interest paid on the debt due to her to 1 or at most 1 per cent. This modification, supposing it were adopted, would be advantageous for the publice, while it would in no degree trench on the principle of the Act of 1844, or impose any improper hardship on the Bank."

If we are not mistaken, the reason why the Government pays 3 per cent is, because the eleven millions represent stock taken by the Bank at the time when Government was continually increasing its debt: the 3 per cent is the dividend upon so much stock. That which constitutes the privilege of the Bank is, that it is free to issue notes to the extent of fourteen millions, because it stands as a creditor of the State. Any other holders of the Three per Cents clubbing together to the extent of eleven millions, receiving their dividends as usual, but allowed to issue their own private notes and take the profits thereon, would present the parallel to the Bank of England. The privilege is a gift from the Government without consideration. Such is the complaint; but the perallel between the associated stockholders and the Bank of .lingiand does not quite hold good. The Bank in fact constitutes an important public department, essentially belonging to the commercial world, but charged with Government functions. There are many advantages in handing over the management of the circulation to an establishment at the head of commerce and independent of our shifting Cabinets. But if it is charged with administrative duties' it may fairly claim the salary. The simplest form of the question, therefore mooted in the extract which we have just quoted from the letter of "X," is, whether or not the salary paid to the Bank of England for that duty is too much ? And here, it appears to us, is the sole question that can be advantageously debated on the renewal of the Charter—Do we, or do we not, pay the Bank of England wages too high for the very important service that it performs ? Before answering that question, it would be proper to compare the gross salary paid to the Bank for its administrative office, with the average cost of our public departments, in proportion to the trust and to the work done.