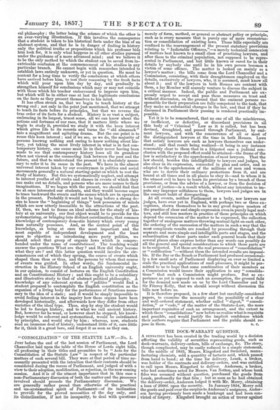 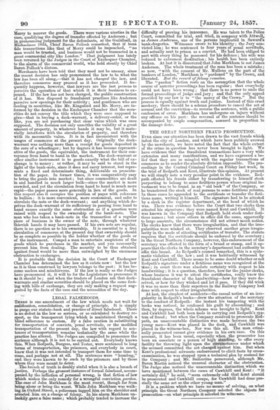 A smesknow has been created in the trading world by a decision affecting the validity of securities representing goods, such as dock-warrants, delivery-orders, bills of exchange, &c. The story, though complicated, may be easily reduced to a simple statement. In the middle of 1853, Messrs. ford and Swinford, manufacturing chemists, sold a quantity o tartaric acid, which passed from hand to hand ; at the time for delivery, Leask, a broke; was holder of the contracts and delivery-orders, and was entitled to call upon Messrs. Kingsford to deliver. Anderson, a broker, who had sometimes acted for Messrs. Van Noften, and whose bon& fides was assumed without question' purchased the goods from Leask, professedly for that firm ; but as soon as he had obtained the delivery-order, Anderson lodged it with Mr. Merry, obtaining a loan of 20001. upon the security. In January 1854, Merry sold the goods and paid over the surplus to Anderson's assignees, A.nderson having previous" been made a bankrupt and had been convicted of forgery. Kingsford brought an action of trover against Merry to recover the goods. There were various niceties in the case, qualifying the degree of transfer effected by Anderson ; but in pronouncing judgment for the defendants, at the Guildhall, in Michaelmas 1855, Chief Baron Pollock remarked, that if bone fide transactions like that of Merry could be impeached, "no man would be trusted, and business would not be transacted in a great commercial city like London." That judgment has lately been reversed by the Judges in the Court of Exchequer Chamber, to the alarm of the commercial world, who hold stoutly by Chief Baron Pollook's dictum.

Merchants have been told that they need not be uneasy, sine* the recent decision has only pronounced the law to be what the law has been all along,—that it has not changed the law, and therefore commerce may proceed as it has proceeded. It frequently happens, however, that lawyers are the last persons to perceive the operation of that which it is their business to expound. If the law has not been changed, the public construction of it has. Men disposed to fraudulent practices like Anderson perceive new openings for their activity ; and gentlemen who are dealing in securities, like Mr. Kingsford and Mr. Merry, are informed by the decision in the Exchequer Chamber that the securities do not convey the title which they were once supposed to give—that in buying a dock-warrant, a delivery-order, or the like, you are not purchasing that dear value which was once supposed. The decision not only unsettles the validity of a great amount of property, in whatever hands it may be, but it materially interferes with the circulation of property, and therefore with its mercantile value. It is in feet inconsistent with the usages of commerce at the present day. Originally the dockwarrant was nothing more than a receipt for goods deposited in the care of a wharfinger ; but by degrees it has become representative of the goods, the equivalent, the instrument for their conveyance from hand to hand in the market. The dock-warrant or other similar instrument is to goods exactly what the bill of exchange is to money ; or rather, it may be said to stand in the light of the bank-note since it does not carry interest, but repre sents a fixed and de i

terminate thing, deliverable on presentation of the paper. In former times, it was comparatively easy to bring the goods into market ; but since commodities are dealt in and handled in much larger bulk—since the market is more crowded, and yet the ciroulation from hand to hand is much more rapid—the paper passes more generally in lieu of the goods. In this respect also it occupies the position of paper with reference to bullion : it is more convenient, more economical, and safer to circulate tho note or the dock-warrant ; and anything which de prives he dock-warrant : of its sufficiency inpassing from hand to azeausesexaeytheobstuonasacuestionwere prives he dock-warrant : of its sufficiency inpassing from hand to azeausesexaeytheobstuonasacuestionwere raised with respect to the ownership of the bank-note. The man who has taken a bank-note 111 the transaction of a regular piece of business is the owner of the note, through whatever thievish hands it may have passed. If his own acts are regular, there is no question as to his ownership. It is essential to a free circulation of commerce at the present day that ownership should be as complete as possible in the holder whether of the goods or of the instrument. Compel a man to entertain suspicions of the goods which he purchases in the market, and you necessarily prevent him from dealing. The security to be thus obtained against fraud would be more than outweighed by the enormous obstruction to exchanges.

It is probable that the decision in the Court of Exchequer Chamber has determined the law as it exists now : but the law as it is thus construed by lawyers belongs to the past; it has become useless and mischievous. If the law is really as the Judges have pronounced it, it will be for the Legislature to pronounce it as it should be ; and when the traders of London ask that dockwarrants and similar securities should be placed on the same footing with bills of exchange, they are only making a request suggested by the facts of the case and the necessities of the day.