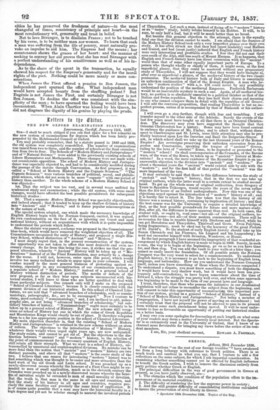 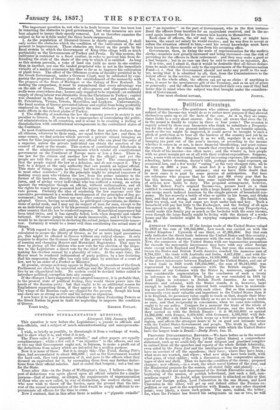 Athens, 29th December 1856. Your observations "on the root of our foreign troubles" have awakened me from a long lethargy with reference to Greek politics. There is so much truth and candour in what you say, that I venture to add a few reflections on the same subject, for which I ask impartial consideration. In examining whether something cannot yet be effected by English influence to benefit the Greek nation, I wish to remove the discussion entirely from party politics whether Greek or English. The principal difficulties in the way of good government in Greece at present, as you have justly observed, are 1. The obstacles which the condition of the population offers to the improvement of its material condition' • 2. The difficulty of rendering the law the supreme power in society; 3. And the still greater difficulty of consolidating institutions calculated to insure the preservation of civil liberty in Greece.

• Spectator 13th December 1856. Topics of the Day. The important question is, not who is in fault because time has been lost in removing the obstacles to good goverrunent, but what measures are now best adapted to insure their speedy removal. Let us therefore evantine the subject as far as it falls under the three heads enumerated. 1. As the population of liberated Greece is chiefly agricultural, I shall only notice the obstacles which the condition of the Cultivators of the soil

resent to improvement. These obstacles are forced on the people by the iiscal system to which the Government of King Otho clings with as much pertinacity as the Governments of Turkey and Persia. By this system, the cultivator is restricted to a fixed routine, in order to prevent him from defrauding the state of the share of the crop to which it is entitled. As long as this system prevails, a yoke of land can yield no more in one century than in another, nor can the landed proprietor who is not in the immediate vicinity of a market economize his time so far as to improve his cultivation or plant trees. The effect of the Othoman system of fiscality persisted in by the Greek Government, under a German Court, may be estimated by comparing the progress of Greece since the establishment of the monarchy with the progress of the State of Michigan or the Colony of New Zealand. In making the comparison, it must be remembered that every advantage was on the side of Greece. Thousands of olive-groves and vineyards existed; wells were everywhere dug; houses only required to be repaired ; an unlimitd supply of cheap labour was obtainable from the Christians in Turkey ; capital was abundant in the hands of wealthy Greek bankers and merchants, at St. Petersburg, Vienna, Trieste, Marseilles, and Leghorn. Unfortunately, the fiscal system of Greece prevented labour and capital from being profitably employed on the land. We see precisely the same obstacles producing the same effects in the richest plains of Turkey.

2. The difficulty of rendering the law the supreme power in society is not peculiar to Greece. It seems to be a consequence of centralizing the political administration in all countries, and it seems to be creating a feeling of dissatisfaction with constitutional arrangements in the centralized states of the Continent.

In most Continental constitutions, one of the first articles declares that all citizens, whatever be their rank, are equal before the law ; and then, in some corner, we find articles which prevent a private citizen bringing an action for false imprisonment against any official who can plead the order of a superior, unless the private individual can obtain the sanction of the council of state or the senate. This system of constitutional falsehoods is one of the administrative arrangements which render all constitutional government on the Continent of Europe more or less a farce. There is, one law for the citizen and another law for the official ; and yet the people are told they are all equal before the law ! The consequence is that the people regard the law as a delusion, and do not respect it. They look to a despot as the only authority that can punish an unjust official. This state of things exists in Greece ; but the remedy is much easier than in most other countries " ; for the principle might be adopted tomorrow of making every man who violates the law, from the prime minister to the farmer of the land-tax, directly responsible to the person whom his act injures, and of giving every individual who has suffered a wrong, an action against the wrongdoer though an official, without authorization, and all the rights he would have poasessed had the injury been inflicted by any private person. Probably the idea of rendering the law supreme over the executive government is a modern development of the principles of free government; but neither Greece nor any other country can be free until it is adopted. Greece, having no nobility, no privileged corporations, no distinctions of social rank, and I may say no respect of man for man, except so far as an individual may gain it by his personal conduct, requires more than any other country that the law be rendered supreme. Monarchical supremacy has been tried twice, and it has signally failed, both when despotic and constitutional. Of course judges must be made immoveable, and I believe there would be no inconvenience in declaring the actual judges immoveable tomorrow. Certainly it would be a lesser evil than continuing the actual state of things.

3. With regard to the still greater difficulty of consolidating institutions calculated to secure the liberty of Greece, as far as mere legal guarantees go, this might be effected in Greece without any radical change. It only requires to deprive the German Court of the power which it now possesses of naming and changing Mayors and Municipal Magistrates. This may be done by giving all the citizens who now vote for the election of the Deputies to the Legislature a direct vote for the chief of the municipality, and making his election annual by a plurality of votes. At the same time, the Mayor must be rendered independent of party politics, by a law declaring that his suspension from office can only take place by sentence of a court of law, not by an order of a Prefect or Minister. At present, strange as it may appear in England, the members of the Greek Parliament are elected by universal suffrage and the Mayors of municipalities by an oligarchical body. No system could be devised better suited to introduce political corruption into any country. If the changes I have suggested were adopted tomorrow, it is probable that, in the present state -of political feeling, they would throw power into the hands of the Russian party : but that ought to be an additional reason for Englishmen supporting them, if they appear to be for the good of Greece. The wings of the Russian eagle are clipped for the present, though his beak and claws are as strong as ever and his nature as rapacious. I now leave it to you to determine whether the three Protecting Powers or the Greek Nation be most in fault for neglecting to improve the condition of Greece.