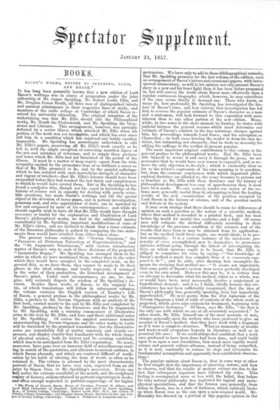 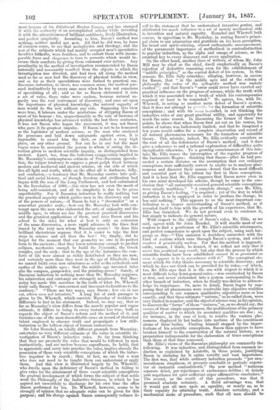 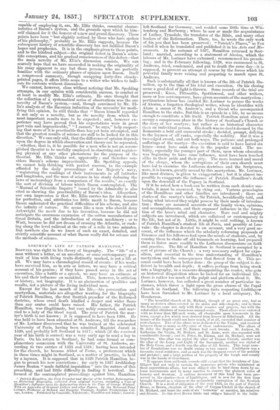 BACON'S WORKS, EDITED Dr SPEDDING, ELLIS, AND HEATH.* IT has long been generally known that a new edition of Lord Bacon's writings was in course of preparation under the joint editorship of Mr. James Spedding, Mr. Robert Leslie Ellis and Mr. Douglas Denon Heath, all three men of distinguished talents and eminent attainments in their respective lines of study, and members of the noble college at Cambridge at which Bacon received his university education. The original intention of the undertakina.° was that Mr. Ellis should edit the Philosophical works, Mr. Heath the Professional, and Mr. Spedding the Occasional and Literary. This arrangement, however, was partially defeated by a severe illness which attacked Mr. Ellis when his portion of the work was yet incomplete, and which has ever since left him in a condition which has rendered any bodily exertion impossible. Mr. Spedding has accordingly undertaken to edit Mr. Ellis's papers,. preserving all Mr. Ellis's work exactly as he left it, with the single exception of correcting manifest lapses of the pen and mistakes of reference, and to supply those prefaces and notes which Mr. Ellis had not furnished at the period of his illness. It must be a matter of deep regret—apart from the wide sympathy excited by the premature close of so brilliant a career as that of Mr. Ellis promised to be, and by the painful sufferings which he has endured with such marvellous strength of character and vigour of intellect—that Mr. Ellis's labours should have been suspended before they had reached the last finish and completeness to which he would have carried them. But in Mr. Spedding he has found a coadjutor who, though not his equal in knowledge of the history of science and in capacity for dealing with purely scientific questions, has made Bacon's writings and life the special object of the devotion of many years, and in patient investigation, generous zeal, and wise appreciation of facts, can be matched by few and surpassed by none of his contemporaries : and while we should eagerly wish to have all that Mr. Ellis would have thought necessary or useful for the explanation and illustration of Lord Bacon's philosophical works, we find in the additional matter contributed by Mr. Spedding important modifications of some of Mr. Ellis's views, and are inclined to think that a. truer estimate of the Baconian philosophy is gained by comparing the two statements than would have resulted from either taken alone.

The present volume contains the "Novum Organism," the " Parasceve ad Historiam Naturalem et Experimentalem," and the "Be Augmentis Seientiarum," with various introductory matter of Bacon's own to each of these divisions of the projected " Instauratio Magna." Mr. Spedding has arranged them in the order in which we have mentioned them, rather than in the order which they would have occupied in the completed work, on the ground that, as we have them, they cannot be made to fit their places in the ideal scheme, and really represent, if arranged i

account of Bacon's method, that they have dealt with a fragment, as if it were a complete structure. What an immensity of trouble and waste would scrupulous honesty in literature as well as in practical life save ! If we could always feel confident that a work once professed to have been done had been done, and could build. upon it as upon a sure foundation, how much more rapidly would science and general culture advance, instead of being compelled, as it is now, constantly to retrace its steps and reexamine its fundamental assumptions and apparently best-established observations!

The popular opinion about Bacon is, that in some way or other

he first taught men the importance of observing nature, and how to observe, and that the results of modern science are due to the fact that subsequent inquirers have followed his rules. This, feeling is accompanied more or less with the belief, that before his time natural philosophy was neglected for logical and meta

physical i speculations, and that the human race generally, from as Adam to Bacon, was a state of darkness, which suddenly broke up when Bacon rose as the sun upon a new-created world, Mr. Macaulay has dressed up a portion of this popular opinion in the

capable of employing it, are, Mr. Ellis thinks, essential characteristics of Bacon's system, and the grounds upon which he himself claimed for it the honour of anew and grand discovery. These points have been "but slightly noticed by those who have spoken of his philosophy," probably as Mr. Ellis suggests, because the subsequent history of scientific discovery has not fulfilled Bacon's hopes and prophecies. It is in the emphasis given to these points, and to the kindred subject—the original defect in Bacon's scientific conceptions, and his gradual consciousness of this defect—that the main novelty of Mr. Ellis's discussion consists. We can scarcely hope that we have succeeded in making the originality of his essay apparent to any but those persons who are perfectly familiar with the ordinary phases of opinion upon Bacon. Itself a compressed summary, though occupying forty-five closelyprinted pages, it offers little scope to a writer who wishes to indicate its contents without discussion.

We cannot, however, close without noticing that Mr. Spedding attempts, in our opinion with considerable success, to combat or at least to modify Mr. Ellis's estimate. He once thought that the collection of a systematical series of observations was the one novelty of Bacon's system,—and, though convinced by Mr. Ellis's analysis of the Baconian induction of the necessity for modifying this opinion, he still thinks that "Bacon himself regarded it not only as a novelty, but as the novelty from which the most important results were to be expected ; and, however experience may have proved that his expectations were in great part vain and impracticable," "I cannot," he says," help suspecting that more of it is practicable than has yet been attempted, and that the greatest results of science are still to be looked for in this direction." We can only add, that the difference of opinion depends upon the degree in which observation and theory can be separated, —whether, that is, it be possible for a man who is not an accomplished theorist to be usefully employed in observing and registering physical or any other phenomena for the purpose of the theorist. Mr. Ellis thinks not, apparently ; and therefore considers Bacon's scheme impracticable. Mr. Spalding appeals, we cannot help thinking with perfect success, to the example afforded by the daily proceedings of her Majesty's navy, "registering the readings of their instruments in all latitudes and longitudes, and the man of science in his study deducing the laws of meteorology from a comparison of the results," as exactly the sort of division of labour which Bacon contemplated. The "Manual of Scientific Inquiry" issued by the Admiralty is also cited as showing the practicability of Bacon's idea. Altogether, our own impression is that Mr. Ellis carries too far his demand for perfection, and attributes too little merit to Bacon, because Bacon underrated the practical difficulties of his scheme, and also the infinity of nature. He seems like a man who should deny Arkwright the merit due to his invention, because he did not anticipate the enormous expansion of the cotton manufactures of Great Britain, and the introduction of steam machinery ; or to Watt, because he did not dream of crossing the Atlantic, or rushing along the level railroad at the rate of a mile in two minutes. But nowhere else do we know of such an exact, detailed, and strictly, scientific account of what Bacon really did for science and the methods of science.