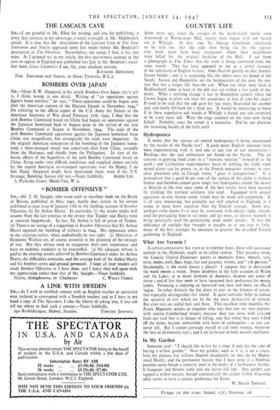 Some years ago, when the ravages of the death-watch beetle were discovered in Westminster Hall, repairs were begun with oak beams cut at Whiligh. At that time Sir George Courthope calculated, so he tcld me, that the oaks then being cut for the repara- tion work must have been youngsters when• their neighbours were felled for the original building of the Hall. I see from a photograph in The Times that the work is being continued from the same woods. This has long appealed to me as a pretty example of the conkinuity of English history. Oaks flourish greatly on that Surrey- Sussex border ; and it is surprising that the oldest trees are found in the South. Sussex and Hampshire are the headquarters of the yew, the one tree that has a longer life than the oak. When our ships were built at Bucklershard some at least of the oak was cut within a few yards of the docks. What a startling change it was in Hampshire scenery when the Crown began to plant ash trees for aeroplanes in lieu of oaks for ships! It used to be said that the oak grew for Soo years, flourished for another 300, and slowly fell back for a third 300. It would be interesting to know if in these superlative oak woods at Whiligh is found any oak estimated to be 1,000 years old. Were the rings counted on the trees now being felled? Probably, since the owner is a naturalist. Did he not discover the reasoning faculty of the little owl?