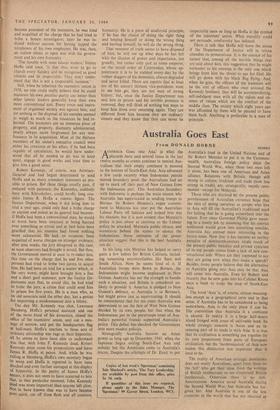 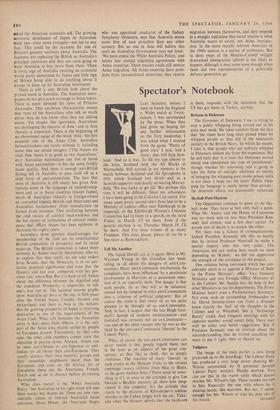 USTRALIA Goes into Asia' is what the .,placards have said several times in the last twelve months as events continue to remind Aus- tralians that their empty continent is moored to the bottom of South-East Asia. Asia advanced a few yards recently when Indonesian patrols moved boundary posts the Australians had set up to mark off their part of New Guinea from the Indonesian part. This Australian boundary with Indonesia is perhaps the main reason why Australia has equivocated in sending troops to Borneo. Sir Robert Menzies's vague commit- ment to Malaysia last year put the Australian Labour Party off balance and helped him win his election; but it is now evident that Menzies's policy is just, about as cautious as the Labour policy he attacked. Maintain public silence, and manceuvre behind the scenes to silence the Indonesians. Some estimates of the power situation suggest that this is the best Australia can do.

In his long rule Menzies has helped to carry quite a few babies for British Cabinets, includ- ing screaming uncontrollables like Suez and South Africa. Now he seems tired of it. If Australian troops were flown- to Borneo, ,the Indonesians might become unpleasant in New Guinea. Australia has not the strength to handle such a situation, and Britain is considered un- likely to provide it. America is pledged to New Guinea's defence, as Australia is to Borneo's, but might prove just as equivocating. It should be remembered that for ten years Australia was determined to see the fate of West New Guinea decided by its own people, but that when the Indonesians put in the paratroops none of Aus- tralia's powerful friends supported Australia's policy. This defeat has shocked the Government into more modest policies.

Strategically Australia became an Asian power as long ago as December, 1941, when the Japanese began seizing South-East Asia and nobody but the Americans came to Australia's rescue. Despite the attempts of Dr. Evatt to put Australia's trust in the United Nations and of Sir Robert Menzies to put it in the Common- wealth, Australian foreign policy since the Second World War, when these two men left it alone, has been one of American and Asian alliance. Relations with Britain, though still strong in culture, tradition and trade (now less strong in trade), are, strategically, mainly cere- monial--except for Malaysia.

Those who are alarmed by the present public pointlessness of Australian existence hope that the idea of seeing ourselves as people who live in Asia will fill the Australian's traditional need for feeling that he is going somewhere into the future. Ever since Governor Phillip gave mean-

ing to a lonely job by assuming that his convict settlement would grow into something sensible,

Australia has seemed more interesting in the future tense. Now that it has become an earthly paradise of nineteenth-century ideals much of the present public banality and private cynicism of its top people conies from a lack of new con- versational aids. Where are they supposed to say they are going now when they make a speech?

Besides, many people believe that the alternative to Australia going into Asia may be that Asia will come into Australia. Even Sir Robert said recently that he now goes into his Cabinet Room once a 'Week to study the map of South-East Asia.

The word 'Asia' is, of course, almost meaning- less except as a geographical term and in that sense, if Australia has to be considered as being somewhere, Asia is the only place it can be. The convention that Australia is a continent is absurd. In reality it is a large half-desert island fringed with areas of cultivable land. Its whole strategic concern is Asian and an in- creasing part of its trade is with Asia. It is true that its civilisation is something put together (in its own proportion) from parts of European civilisation, but the 'modernisation' of Asia now makes this distinction less important than it used to be.

The reality of American strategic dominance does not worry Australians, apart from those on the ;`left' who get their ideas from the writings of British intellectuals or are (imported) British intellectuals., Otherwise there is no anti- Americanism. America saved Australia during the Second World War, but Australia has for- given her. And Australia is one of the few countries in the world that has not received or

asked for American economic aid. The growing economic dominance of Japan in Australian trade has—even more strangely—not led to any fuss. This could be the occasion for one of Britain's greatest anxieties about Australia. The Japanese are replacing the British as Australia's principal customers and they are soon going to want Australia to buy more from them. There is every sign of Australia entering an economic world partly dominated by Japan and little sign of Britain being able to do anything about it except to keep up its Australian investment.

There is still a very British look about the printed word in Australia. The Australian news- papers do not give much coverage to Asian topics. There is more demand for news of Princess Alexandra. This un-Asian 'characteristic means that most of the Australians who talk so much about Asia do not know what they are talking about. Yet despite this ignorance, Australians are developing the rhetoric of Asia—and in Asia rhetoric is important. There is the beginning of an obsessional usage of the word 'Asia,' the first essential rule of the Asian Club. Australian forward-lookers are rarely without it, including some who use sexual imagery. (`The Asians are vital. One Asian is as good as two Australians,' etc.) Australian nationalism can feel at home with Asian nationalism—it has the same freshly made quality. And there is enough anti-British feeling left in Australia to pass itself off as a mild form of anti-colonialism. The fact that most of Australia is still empty has given Aus- tralians some of the language of underdevelop- ment and, as in Asian countries (except Japan), much of Australian industry is foreign-owned or controlled (mainly British and American) and Australian businessmen often manufacture on licence from overseas: That oscillating between the cold sweats of cultural backwardness and the hot sweats of intimations of cultural renais- sance that afflicts Asians has been epidemic in Australia for eighty years.

Australia's three greatest disadvantages for membership of the club are its constitutional British connection, its prosperity and its racial make-up. The British connection is taken more seriously by Asians than by Australians, who try to explain that they really do not take orders from Britain, that the Monarchy is of no par- ticular practical significance and even that the Queen's visit last year, compared with her pre- vious visit, was a flop. But it is hard to tell Asians about the difference between the dignified and the expedient. Prosperity is impossible to talk one's way out of. The national income graphs show Australia up there at. the top, in fifth place after the United States, Canada. Sweden and Switzerland, and there is Asia at the bottom. But the growing prosperity of Japan is removing destitution as one of the requirementi of the Asian Club. What still threatens the Australian entry is that, apart from Siberia, it is the only part of the Asian area mainly settled by people 'of European descent. Fortunately, by their own rules the other club members cannot state this objection in precise terms. Anyway, Asians can be more anti-Chinese or anti-Japanese or anti- Indian (or all three) than anti-European. They usually distrust their own minority groups and their immediate neighbours more than the Europeans and even on the distrust list of Europeans there are the Americans, French, Dutch and so on to distrust before distrusting Australians.

What does. matter is the 'White Australia Policy.' No Australian in his right mind still uses these words, but Asians do. There are now con- siderable tokens of internal Australian racial tolerance. Dean Dixon. the American Negro

who was appointed conductor of the Sydney Symphony Orchestra, says that Australia seems more free of race prejudice than any other country. But no one in Asia will believe this until an Australian Government says out loud: 'We have ended the White Australia Policy,' and enters into mutual migration agreements with Asian countries. These treaties could still restrict Asian migration. All Asian countries have prob- lems from unassimilated minorities, they restrict migration between themselves, and they respond to a straight indication that racial tension is what Australia wants to avoid, not Asian immigra- tion. In the more racially tolerant Australia of the 1960s tension is a matter of arithmetic. But in these years of the Menzies-Calwell twilight dramatised immigration reform is not likely to happen, although it may come soon enough when these last two representatives of a politically defunct generation go.