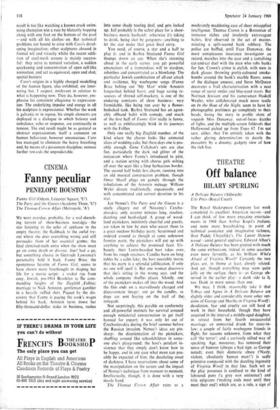 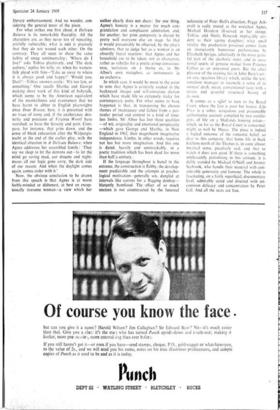 The Royal Shakespeare Company last week completed its excellent American season—and I can think of few more engaging entertain- ments in 1968 than Arthur Kopit's Indians, and none more breathtaking. in point of technical assurance and imaginative richness, than Paddy Chayefsky's The Latent Hetero- sexual—amid general applause. Edward Albee's A Delicate Balance has been greeted with much the same enthusiasm, indeed in some quarters even more fervently, as his brilliant Who's Afraid of Virginia Woolf? Certainly the two plays are, in theme at least, closely related. And yet. though everything may seem quite jolly on the surface, there is—as George ob- served in the earlier play—a dank side to it, too. Dank in more senses than one.

We may. I think, reasonably take it that Tobias and Agnes in A Delicate Balance are slightly older and considerably more sober ver- sions of George and Martha in Virginia Woolf: desolation, fear and cruelty are still hard at work in their household, though they have acquired in the interval a middle-aged daughter, in retreat from her fourth unsuccessful marriage; an unmarried drunk for sister-in- law; a couple of fairly woebegone friends in flight, for reasons unknown, from what they call 'the terror'; and a curiously stilted way of speaking. Age, moreover, has removed their sense of humour (always a bad sign, as George noted); even their domestic abuse (Nasty, violent, absolutely human man!') is sadly primitive compared with the dazzling ingenuity of Virginia Woolf in that line. Such wit as the play possesses is confined to the kind of laboured puns Ca grey non eminence') and trite epigrams (making ends meet until they meet their end') which are, as a rule, a sign of

literary embarrassment. And no wonder, con- sidering the general tenor of the piece.

For what strikes one first about A Delicate Balance is its remarkable flaccidity. All the characters are, as they never tire of repeating, pitifully vulnerable; what is odd is precisely that they do not wound each other. On the contrary. They all seem to share the same habits of smug sentimentality: 'Where do I live?' asks Tobias plaintively, and 'The dark sadness,' replies his wife; or, when his women- folk plead with him—`Take us away to where it is always good and happy!' Would you, Dad?'—Tobias answers coyly: 'It's too late, or something.' One recalls Martha and George making short work of this kind of babytalk, which seems to be the American equivalent of the mawkishness and evasiveness that we have learnt to abhor in English playwrights since Dear Brutus; here, it is presented with no trace of irony and, if the exuberance, dex- terity and precision of Virginia Woolf have vanished, so have the ferocity and pain. Com- pare, for instance, that grim dawn, and the sense of bleak exhaustion after the Walpurgis- nacht at the end of the earlier play, with the Identical situation in A Delicate Balance, when Agnes addresses her assembled family: 'They say we sleep to let the demons out—to let the mind go raving mad, our dreams and night- mares all our logic gone awry, the dark side of our reason. And when the daylight comes again, comes order with it.'

Now, the obvious conclusion to be drawn from this speech is that Agnes is at worst feeble-minded or dishonest, at best an excep- tionally tiresome woman—a view which her author clearly does not share: for one thing, Agnes's honesty is a matter for much con- gratulation and complacent admiration, and, for another, her prim pomposity is shared by pretty well everyone else on stage. So that it would presumably be objected, by the play's admirers, that to judge her as a woman is an absurdly literal reaction : that Agnes and her household are to be taken, not as characters, rather as vehicles for a poetic group conscious- ness, variations on a theme or, in Mr Albee's own metaphor, as instruments in an orchestra.

In which case, it would be more to the point to note that Agnes is evidently soaked in the hackneyed images and self-conscious diction which have made life so extremely tricky for contemporary poets. For what seems to have happened is that, in transposing his chosen themes of inadequacy and failure from a par- ticular period and context to a kind of time- less limbo, Mr Albee has lost those qualities —of wit, originality and emotional perspicacity —which gave George and Martha, in New England in 1962, their magnificent imaginative independence. Limbo, in other words, requires not less but more imagination. And this one is dated, heavily and unmistakably, in a poetic tradition which has been dead for more than half a century.

If the language throughout is banal in the extreme, the construction is flabby, the develop- ment predictable and the attempts at psycho- logical motivation—generally sex, dangled at intervals like carrots for a flagging donkey— blatantly hamfisted. The 'effect of so much unction is not counteracted by the funereal

solemnity of Peter Rail's direction; Peggy Ash- croft is sadly muted as the wretched Agnes, Michael Hordern ill-served as her stooge, Tobias, and Sheila Hancock implacably stri- dent as their ageing daughter; what small vitality the production possesses comes from an insouciantly humorous performance by Elizabeth Spriggs, admittedly in the more grate- ful part of the alcoholic sister, and in occa- sional spurts of genuine malice from Patience Collier as an unwanted guest. But the chief pleasure of the evening lies in John Bury's set: an airy, spacious library which, unlike the text, somehow manages to reconcile a sense of its owners' drab, mean, conventional taste with a severe and graceful structural beauty of its own.

It comes as a relief to turn to the Royal Court, where the fare is poor but honest. Life Price is a sober, scrupulous and presumably authoritative account, compiled by two sociolo- gists, of life on a Midlands. housing estate— which, so far as the Royal Court is concerned, might as well be Mecca. The piece is indeed a logical outcome of the romantic belief, so dear to this company, that home life in back kitchens north of the Thames is, in some almost mystical sense, peculiarly real, and that to watch it does you good. If there is something unpleasantly patronising in this attitude, it is deftly avoided by Michael O'Neill and Jeremy Seabrook, who handle their material with con- siderable generosity and humour. The whole is fascinating, on a fairly superficial, documentary level, admirably acted and directed with un- common delicacy and concentration by Peter Gill. And all the seats are free.