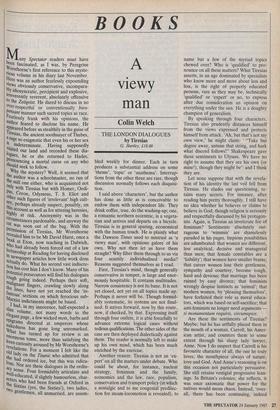 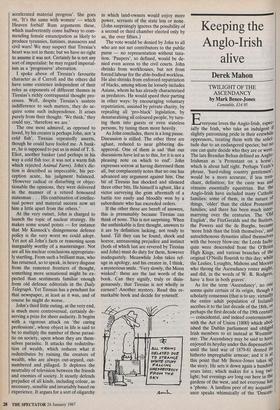 THE LONDON DIALOGUES by Tiresias

Many Spectator readers must have been fascinated, as I was, by Peregrine Nyorsthorne's first reference to this myste- rious volume in his diary last November. Here was an author fearlessly expounding views obviously conservative, incompara- bly idiosyncratic, percipient and explosive, irreverently reverent, absolutely offensive to the Zeitgeist. He dared to discuss in no over-respectful or conventionally bien- pensant manner such sacred topics as race. Fearlessly frank with his opinions, the author feared to disclose his name. He Tiresias before us stealthily in the guise of 1 lresias the ancient soothsayer of Thebes, a sage so enigmatic that even his or her sex 18. indeterminate. Having supposedly ,visited our land and recorded these dia- logues, he or she returned to Hades, pronouncing a mortal curse on any who should seek to follow.

Lae the mystery? Well, it seemed that Lae author was a schoolmaster, no run of the mill one either, who is acquainted not cillY with Tiresias but with Homer, Oedi- Pus, Creon, Odysseus, T. S. Eliot and other such figures of 'irrelevant' high cult- ur.e, perhaps already suspect, possibly,. on ktins account as well as for uttering heresies, ul.ghlY at risk. Anonymity was in the circumstances pardonable, and anyway the cat was soon out of the bag. With the Permission of Tiresias, Mr Worsthorne revealed him to be Mr David Hurst, once a beak at Eton, now teaching in Dulwich, w. ho had already been forced out of a law lectureship at Reading for having disclosed in newspaper articles how little work dons actually do. What his second vast indiscre- tion has cost him I don't know. Many of his Potential persecutors will find his dialogues toustink going indeed. Perhaps their soft, Malignant fingers, crawling slowly along the lines, have not yet reached the 'in- famous' sections on which ferocious sub- Marxist indictments might be based. .1 had, in my innocence, half-expected a stun volume, not many words to the elegant page, a few wicked mots, barbs and ePigrains directed at emperors whose nakedness has gone long unremarked. What has turned up for review is an enormous tome, more than satisfying the keen curiosity aroused by Mr Worsthorne's revelations. For a moment I felt like the old lady on the Titanic who admitted that she had ordered ice, but this was ridicu- Kills. Nor are these dialogues in the ordin- ary sense. Four formidably articulate and Well-educated, if slightly humourless, char- !eters who had been friends at Oxford in the Sixties (yes, the Sixties!), two ladies, t‘vo gentlemen, all unmarried, are assem- bled weekly for dinner. Each in turn produces a substantial address on some `theme', 'topic' or 'anathema'. Interrup- tions from the other three are rare, though discussion normally follows each disquisi- tion.

I said above 'characters', but the author has done as little as is conceivable to endow them with independent life. They drink coffee, true, do the washing-up; one, a romantic northern eccentric, is a vegeta- rian and arrives and departs on a bicycle. Tiresias is in general sparing, economical with the human touch. He is plainly what the Dawson Times used to mistrust as 'a viewy man', with opinions galore of his own. Why not then let us have them straight? Why filter them through to us via four scantily individualised media? Reasons suggested themselves as I read.

First, Tiresias's mind, though generally conservative in temper, is large and enor- mously hospitable. It contains multitudes. Narrow consistency is not its bane. It is not yet closed, not yet on all topics made up. Perhaps it never will be. Though formid- ably systematic, its systems are not final- ised. It strives forward, now by this route, now, if checked, by that. Expressing itself through four outlets, it is able forcefully to advance extreme logical cases without tedious qualifications. The other sides of the case are then deployed dialectically against them. The reader is normally left to make up his own mind, which has been much enriched by the exercise.

Another reason: Tiresias is not an 'ex- pert' on all the matters under debate. Who could be about, for instance, nuclear strategy, feminism and the family, economics and the law, race, populism, conservation and transport policy (in which a nostalgic and to me congenial predilec- tion for steam-locomotion is revealed), to name but a few of the myriad topics chewed over? Who is 'qualified' to pro- nounce on all these matters? What Tiresias asserts, in an age dominated by specialists who know more and more about less and less, is the right of properly educated persons, rare as they may be, technically `qualified' or 'expert' or no, to express 'after due consideration an opinion on everything under the sun. He is a doughty champion of generalism.

By speaking through four characters, Tiresias also prudently distances himself from the views expressed and protects himself from attack. `Ah, but that's not my own view,' he might claim: ' "Take but degree away, untune that string, and hark what discord follows!" Shakespeare gave these sentiments to Ulysses. We have no right to assume that they are his own (or mine!), though they might be': and I think they are.

Let none suppose that with the revela- tion of his identity the last veil fell from Tiresias. He eludes our questioning, re- tains many secrets. For instance, after reading him pretty thoroughly, I still have no idea whether he believes or claims to believe in God, though religion is seriously and respectfully discussed by his protagon- ists. Again, is Tiresias an inveterate foe of feminism? Sentiments absolutely out- rageous to `wimmin' are shamelessly paraded in his pages. Impious possibilities are adumbrated: that women are different, less analytical, decisive and managerial than men; that female constables are a liability'; that women have smaller brains; that career women lose their gentleness, sympathy and courtesy, become tough, hard and devious; that marriage has been ruined by easy divorce; that feminists wrongly despise instincts as `animal'; that modern women, by 'pleasing themselves', have forfeited their role as moral educa- tors, which was based on self-sacrifice; that anti-feminists no longer need arguments — si monumentum requiris, circumspice.

Are these the sentiments of Tiresias? Maybe; but he has artfully placed them in the mouth of a woman, Carroll, his Amer- ican artist, and counters them to some extent through his sharp lady lawyer, Anne. Now I do suspect that Carroll is his favourite character of all, the one he truly loves, the mouthpiece always of nature, love and God. And Anne's reasoning is on this occasion not particularly persuasive. She still retains vestigial progressive lean- ings. In Britain's colonies, she reflects, it was once axiomatic that power for the natives would mean chaos. Instead, 'over- all, there has been continuing, indeed accelerated material progress'. She goes on, 'It's the same with women' — which Heaven forbid! Rum arguments these, which inadvertently come halfway to com- mending female emancipation as likely to produce tyrannies, famines, massacres and civil wars! We may suspect that Tiresias's heart was not in them; but we have no right to assume it was not. Certainly he is not any sort of imperialist: he may regard imperial- ism as a 'progressive' aberration.

I spoke above of Tiresias's favourite character as if Carroll and the others did have some existence independent of their roles as exponents of different themes in Tiresias's richly contrapuntal thought pro- cesses. Well, despite Tiresias's austere indifference to such matters, they do ac- quire some such independence. It arises purely from their thought. 'We think,' they could say, 'therefore we are.'

The one most admired, as opposed to loved, by his creator is perhaps John, not 'a cold fish', Tiresias repeatedly asserts, though he could have fooled me. A bank- er, he is supposed to put us in mind of T. S. Eliot, another banker (and perhaps in his way a cold fish too: it was not a warm fish which rejected Animal Farm). John's dic- tion is described as impeccable, his per- ception acute, his judgment balanced. `However radical or disturbing or objec- tionable the opinions, they were delivered in the manner of a retired honoured statesman . . . His combination of intellec- tual power and material success now set him a little apart from the others.'

At the very outset, John is charged to launch the topic of nuclear strategy. He makes some sound points — for instance that Mr Kinnock's disingenuous defence policy is the very worst we could adopt. Yet not all John's facts or reasoning seem inarguably worthy of a mastersinger. Nor are all his nuclear conclusions appropriate- ly startling. From such a brilliant man, who has returned, so to speak, in heavy disguise from the remotest frontiers of thought, something more sensational might be ex- pected than sentiments familiar enough from old defence editorials in the Daily Telegraph. Yet Tiresias has a penchant for that newspaper, at least as it was, and of course he might do worse.

John's third little outing, at the very end, is much more controversial, certainly de- serving a prize for sheer audacity. It begins with a vigorous attack on 'the caring professions', whose object in life is said to be to multiply the number of those parasi- tic on society, upon whom they are them- selves parasitic. It attacks the redistribu- tion of wealth, which reduces what it redistributes by ruining the creators of wealth, who are always out-argued, out- numbered and pillaged. It deplores the neutrality of television between the friends and enemies of society. It stoutly defends prejudice of all kinds, including colour, as necessary, sensible and invariably based on experience. It argues for a sort of oligarchy in which land-owners would enjoy more power, servants of the state less or none. (John surprisingly ignores the possibility of a second or third chamber elected only by us, the over fifties.) The vote would be denied by John to all who are not net contributors to the public purse — no representation without taxa- tion. 'Paupers', so defined, would be de- nied even access to the civil courts. John shrinks from workhouses, but not from forced labour for the able-bodied workless. He also shrinks from enforced repatriation of blacks, among whom he loosely includes Asians, whom he has already characterised as predators. He would speed their parting in other ways: by encouraging voluntary repatriation, assisted by private charity, by repealing all 'pro-black' legislation, by denaturalising all coloured people, by turn- ing them into guests or even stateless persons, by taxing them more heavily.

As John concludes, there is a long pause. Discussion is stilled. The other three are aghast, reduced to near gibbering dis- approval. One of them is sad 'that our discussions have led us to this, for it is not a pleasing note on which to end'. John expresses sorrow at having distressed them all, but complacently notes that no one has advanced any argument against him. One bit of Tiresias has shocked and silenced three other bits. He himself is aghast, like a victor surveying the grim aftermath of a battle too easily and bloodily won by a subordinate who has exceeded orders.

If the other three are bereft of answers, this is presumably because Tiresias can think of none. This is not surprising. When the unthinkable is first thought, answers to it are by definition lacking, not ready to hand. Till they can be found, shock and horror, unreasoning prejudice and instinct (both of which last are revered by Tiresias and John) must do duty for them, however inadequately. Meanwhile John takes ref- uge in apology, and his creator in, I think, a mysterious smile. 'Very slowly, the Moon winked': these are the last words of the book. Can they signify, truly or disin- genuously, that Tiresias is not wholly in earnest? Another mystery. Read this re- markable book and decide for yourself.