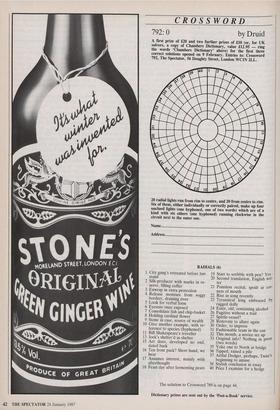 A first prize of £20 and two further prizes of £10 (or, for UK solvers, a copy of Chambers Dictionary, value £12.95 — ring the words 'Chambers Dictionary' above) for the first three correct solutions opened on 9 February. Entries to: Crossword 792, The Spectator, 56 Doughty Street, London WC1N 2LL.

20 radial lights run from rim to centre, and 20 from centre to rim. Six of them, either individually or correctly paired, make up four unclued lights (one hyphened, one of two words) which are of a kind with six others (one hyphened) running clockwise in the circuit next to the outer one.

Renovate to allure again Order, to impress Fashionable team in the can This month, a novice set up Original info? Nothing in press (two words) Yoke one to North at bridge Tipped, raised a pile Artful Dodger, perhaps, Twist's beginning to amuse Stylish conclusion in essay Price I examine for a hedge The solution to Crossword 789 is on page 44. Dictionary prizes are sent out by the `Post-a-Book' service.