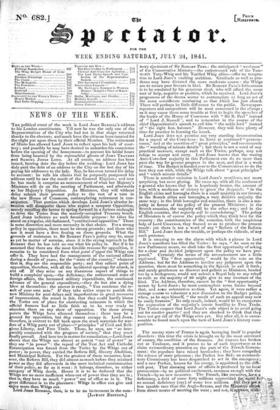 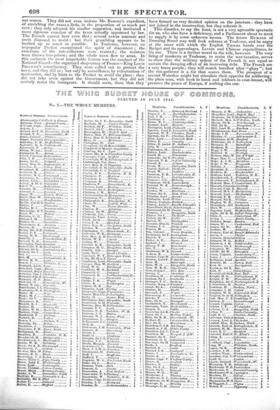 Page 1, 24 July 1841 — The uneasy state of France is again betraying itself in
Close

The uneasy state of France is again betraying itself in

popular disorders : this time the crisis is brought on by the most untoward of causes, the condition of the finances. An emeute has broken out at Toulouse, and it proves to be of such importance as to claim extraordinary attention on the part of the French Govern- ment: the populace have raised barricades ; they have compelled the release of state prisoners ; the Prefect has fled ; an extraordi- nary Commissary has been despatched to act in the emergency ; and a new Prefect, known for his energy, is appointed to the diffi- cult post. That alarming state of affairs is produced by no local provocation—by no political excitement, common enough with the French—by no new measures. The French, like ourselveJiave a

deficiency, a debt of some forty millions unprovided 41-nual to

an annual deficiency (say) of some two millions. t1ey4re a

less taxable race than the Anglo-Saxons, and the riteys shrink ,

from direct means of meeting the want ; and not, i ars, vtith-

out reason. They did mit even imitate Mr. BARING'S expedient, of stretching the taxes a little, in the proportion of so much per cent ; they only adopted his smaller suggestion, and instituted a more rigorous exaction of the taxes actually appointed by law. The French cannot bear even that : several towns murmur and seem disposed to resist ; but their grumbling appears to be hushed up as much as possible. In Toulouse, however, an unpopular Prefect exasperated the spirit of discontent ; the exactions of the tax-collectors were resisted ; the resisters were thrown into prison ; and the whole town flew to arms. In this outbreak the most remarkable feature was the conduct of the National Guard—the organized shopoeracy of France—King Louis Pnurn,x's constituency. They were called out to protect the town, and they did so ; but only by surveillance, by exhortations of moderation, and by hints to the Prefect to avoid the place : they did not take arms against the Government, but they did not actively resist the insurgents. It should seem, then, that they

have formed no very decided opinion on the juncture : they have not joined in the insurrection, but they tolerate it.

This disorder, to say the least, is not a very agreeable spectacle for us, who also have a deficiency, and a Parliament about to meet to supply it by some unknown means. The future HOMANN of Downing Street may well look askance at Toulouse, and be angry at the sneer with which the English TRIERS hands over the Budget and its appendages, Levant and Chinese expenditures, to his use. There is a further moral to the tale, however. The very firing of musketry at Toulouse, to resist the war-taxation, serves to show that the military ardour of the French is not equal to sustain the damping effect of in increasing debt. The French are a very brave people; they will march barefoot after " glory "; but the tax-gatherer is a foe that scares them. The prospect of a second Waterloo might but stimulate their appetite for soldiering : the plain man, with book in hand and inkhorn in coat-breast, will preserve the peace of Europe, if nothing else can.