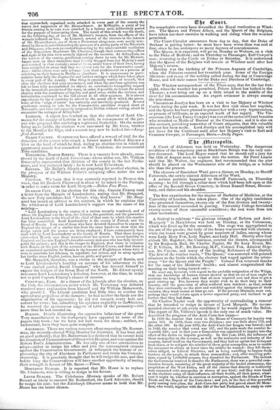 No remarkable events have diversified the Royal rustication at Wind- sor. The Queen and Prince Albert, and the Queen of the Belgians, have taken out-door exercise in walking and riding when the weather permitted.

The Court Circular announces from day to day, that the Duke of Brabant is getting better : he must have been worse than was said at first, since he has undergone so many degrees of convalescence.

The Queen, it is expected, will go on Monday to Woburn, on a visit to the Duke of Bedford ; and on Thursday to Pansanger, Earl Cowper's seat ; returning to the Castle on Friday or Saturday. It is understood that the Queen of the Belgians will remain at Windsor until after her Majesty's return. Monday was the birthday of the Princess Augusta of Cambridge, when the Princess entered her twentieth year. Some of the Foreign Ministers and many of the nobility called during the day at Cambridge House, and left their names for the Duke and Dutchess of Cambridge.

The Windsor correspondent of the Times says, that for the last fort- nighi, when the weather has permitted, Prince Albert has bathed in the Thames; a tent being set up on a little island in the middle of the river for his accommodation. An expert swimmer is always among the attendants.

Viscountess Jocelyn has been on a visit to her Majesty at Windsor Castle during the past week. It was her first visit since her nuptials, and the Queen has been pleased to present her with a very . legantcadeou, or present of brilliants, as an especial mark of her regard. The Vis- countess (the Lady Fanny Cowper) was one of the series of Court beauties who attended as Maids of Honour at the Coronation; and it is also on this account, partaking somewhat of Court etiquette, that this valuable present has been made. Lord Jocelyn and his accomplished lady will not leave for the Continent until alter her Majesty's visit to Earl and Countess Cowper, at Pansanger, Herts.—Daily Paper.