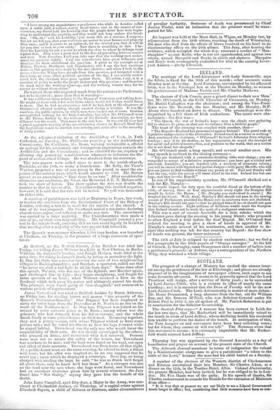 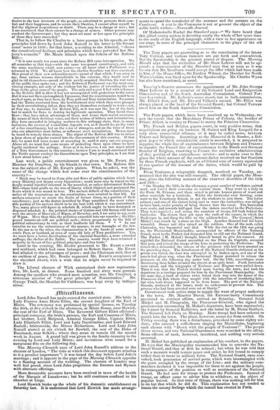 The prospect of a change of Ministry has excited the utmost inter- est among the gentlemen of the law at Edinburgh ; and places are already disposed of in the imaginations of newspaper editors, each eager to see some favourite advanced. It seems to be generally agreed that the Lord President will resign, after a service of thirty years ; to be succeeded by Lord Justice Clerk, who is a veteran in office of nearly the same standing ; and it is surmised that the Dean of Faculty will be the new Lord Justice Clerk. The Lord-Advocateship is matter of more debate : Mr. Home Drummond, a long absentee from the bar, old Sir William Rae, and Mr. Duncan M`Niell, who was Solicitor-General under Sir Robert Peel in 1834-5, are all spoken of. Mr. Patrick Robertson is put in nomination for the Solicitor-Generalship.

The Scottish Pilot says—" A rumour has been current in Leith for the last two days, that Mr. Rutherfurd will be immediately raised to the bench in room of Lord Jeffrey, whose declining health has rendered him unable to perform the duties of the bench. In anticipation of this, the Tory hangers-on and canvassers have been busy soliciting votes ; but for whom, they cannot or will not tell." The Scotsman avers that this statement is untrue: it is extremely improbable that Mr. Ruther- ford would succeed Lord Jeffrey.

Thursday last was appointed by the General Assembly as a day of humiliation and prayer on account of the present state of the Church.

The Arbroath Journal mentions in terms of indignation the refusal by a Nonintrusionist clergyman to give a parishioner "a token to the table of' the Lord," because the man had his child buried on a Sunday.

A number of the electors of the Western district of Claekmannan and Kinross entertained their late Member, Sir Charles Adam, at a dinner on the 15th, in the Tontine Hotel, Alloa. Colonel Abercromby, the present Member, had been invited, but he was obliged to be in Lon- don. Mr. Fox Manle was of the party. In his speech of thanks, Sir Charles endeavoured to console his friends for the extrusion of Ministers from office- " It is true that at present we are not likely to see a Liberal Government much longer in office; but, considering that their measures have been so con-

&dye to the best interests of the people, so calculated to promote their com- fort and their happiness, and to secure their liberties, I cannot allow myself to feel the slightest despondency or doubt. There may be a change of men ; but I am convinced that there cannot be a change of system. Other persons may conduct the Government ; but they must act more or less upon the principles of those they have succeeded."

That is, to follow Sir Charles to a later passage in his speech, on the principles laid down by Lord John Russell in his letter to his Stroud conselients in 1836; for that letter, according to the Admiral, "shows the constitutional feelings and principles which have pervaded her Ma- jesty's councils." Mr. Maule dilated upon the defects of the Reform sill— "It is now nearly ten years since the Reform Bill came into operation. We all remember at that time—with the same ten-pound constituency, and with the same machinery which now exists—we all know what a Parliament was returned in 1832. We all know bow the elective franchise was then exercised. Men proud of their new enfranchisement—proud of that which, I am sorry to say, from various reasons discreditable in the extreme, they would now be glad to rid themselves—proud of their newly-acquired liberties, the real voice of the public then spoke oat; and the Reformed Parliament was the most con- vincing example, not only of the wisdom but the justice of extending the suf- frage to the great mass of the people. The only real regret I feel with reference to the Reform Bill is, that it was not accompanied with protection to the voter. But it was not then contemplated, I presume, that the constituencies would be so worked upon, as they have been, by Tory gold and Tory intimidation. No sooner bad the Tories recovered from the bewilderment into which they were plunged by their overwhelming defeat, than they set themselves zealously to work—not, as they say, to maintain the Reform Bill, as it was now the law of the land, but to search for flaws to destioy its legitimate operation. They found these flaws ; they have taken advantage of them, and hence their recent successes. By means of their fictitious votes, and their system of bribery awl intimidation, they have succeeded in bringing matters to this unhappy state, that, in many instances, the success of a candidate depends not, as it should do, on the voice of a free constituency, but on the voice of strangers, and on the voice of those who can administer most bribes, or influence most intimidation. Means must be found to remedy these abuses. The object of the Reform Bill was to infuse a large share of popular control into the Government of this country. If that fail, we must find some means of amending it, until it carry out our purpose. Above all, we must find some means of protecting those upon whom we have legally conferred the suffrage. Even as it is, however, I am not much afraid of a Tory Government in this country ; because I am as much convinced that the Tories cannot conduct the Government upon Tory principles, as I am that I now stand before you."

Last week, a public entertainment was given to Mr. Ewart, the Member for Dumfries, by his friends in that town. The Reform Bill was the subject also of Mr. Ewart's plaints. What, he asked, was the cause of the change which had come over the constituencies of the country ?—

" Much may be traced to those ebbs and flows of public opinion which beset every Ministry and favour everyOpposition ; much more may be traced to the i deeply-seated mischief inherent n the amended, or rather deteriorated Reform Bill—those fatal grafts on the tree of liberty which blighted and postponed the fruits which it was meant to bear. The ancient defects of the constitution, or rather of the innovations on the constitution, were retained in that bill. Its authors consented to retain the faults of former times, as a portion of their excellences; just as the doctor described by Pope considered the most value- able portion of his ancient shield to be the rust with which it was encumbered. Yes, many places still figure in schedule B, which ought to have decorated or disgraced schedule A: the polluted shades of Gatton and Old Sarum still hover over the streets of Harwich, of Ripon, of Beverley, and, I am sorry to say, even of Wigan. More than this, the pollution extended into our counties; the fifty- pound tenants-at-will are political serfs; driven gregariously to The fold of political subserviency to vote as their landlords bid them. " * In our counties we see the subserviency of the masses; in our boroughs of the few. In the one as in the other, the representation is in the hands of some aristo- cratic Peer, or landlord, or even of some old lady of Tory predilections. Yes, we must have a better distribution of the electoral franchise, a more extended suffrage, the shelter of the Ballot. The country would then have returned a majority in favour of free political principles and free trade."

Later in the evening, Mr. Brodie presented to Mr. Ewart a sword and scabbard, which had once belonged to Robert Burns. Mr. Ewart had alluded to the advantages of peace ; and the Chairman said, that as an emblem of peace, Mr. Brodie requested Mr. Ewart's acceptance of the sheathed sword, with a wish that he might never be required to draw it.

The Liberal electors of Wick entertained their new representa- tive, Mr. Loch, at dinner. Some hundred and sixty were present. Among the speakers who created most sensation, was Mr. Cranfurd, a strenuous asserter of "the great principle of Nonintrusion." Mr. George Traill, the Member for Caithness, was kept away by indispo- sition.