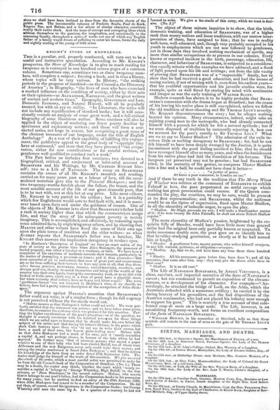 Tnis is a peculiar, and, properly conducted, will turn out to be a useful and instructive speculation. According to Mr. KNIGHT'S prospectus, the Store of Knowledge is to give as much reading for twopence as is conveyed in one hundred octavo pages of a common volume. Sometimes one, sometimes two or three twopenny num- bers, will complete a subject ; forming a book, and in time a library, whose topics will be very various. In History, "the striking periods in the progress of mankind—as the Crusades, the Discovery of America" ; in Biography, "the lives of men who have exercised a marked influence on the condition of society, either by their acts or their opinions—as ALEXANDER, NAPOLEON, and the great writers of ancient and modern times." Geography, Government and Law, Domestic Economy, and Natural History, will all be popularly treated, but with an eye to utility. "In Literature, the series will not include any republication of standard books ; but it will occa- sionally contain an analysis of some great work, and a full critical biography of some illustrious author. Some numbers will also be applied to the object of rendering our finest poetry familiar by specimens and explanatory notices ; and these will form a con- nected series, not large in extent, but comprising a great mass of the choicest treasures of our language, under the title of English Anthology." As a test of their capability of fulfilling this engage- ment, the publishers appeal to the great body of "copyright they have at command," and state that they have procured "the co8pe- ration, either for new contributions or for careful revision, of gentlemen well qualified to conduct such a work."

The Part before us includes four numbers ; two devoted to a biographical, critical, and conjectural or inferential account of SHAKSPERE and his Writings, by Mr. CHARLES KNIGHT him- self; two to a Life of NAPOLEON. The essay on SUAKSPERE contains the cream of all Mr. KNIGHT'S research and reading, carried on for many years past as a labour of love, till the accu- mulated materials gave rise to the Pictorial Shaspere ; and the two twopenny-worths furnish about the fullest, the truest, and the most sensible account of the life of our great dramatic poet, that is to be met with, not at this but at any price. Like most editors, Mr. KNIGHT is very partial to his author but it is a partiality which few Englishmen would care to find fault with, and it is more- over based upon facts and under the guidance of reason. One of the objects of Mr. KNIGHT is to show that SHAKSPERE'S father held a rank in society higher than that which the commentators assign him, and that the story of his subsequent poverty is merely imaginary. This is accomplished, and effectively, by reasoning upon some admitted facts, by explaining away others, and by showing that MALONE and other writers have fixed the sense of their own age upon the plain terms of tradition and the elder writers : as when Annear reports that SHAKSPERE'S father was a butcher, Mr. KNIGHT thus answers the implication derogatory in modern eyes.

"In Harrison's 'Description of England' we have an exact notice of the state of society at the precise time when John Shakspere, the possessor of landed property, was either a butcher or a woolman, or both. We have here a complaint of the exactions of landlords towards their tenants, particularly in the matter of demanding a premium on leases; and it thus proceeds—' But most sorrowful of all to understand, that men of great port and countenance are so far from suffering their farmers to have any gain at all, that they them- selves become graziers, BUTCHERS, tanners, SHLEPMASTERS, woodmen, and dens que quid non, thereby to enrich themselves and bring all the wealth of the country into their own hands, leaving the commonalty weak, or as an idol with broken or feeble arms, which may in a time of peace have a plausible show, but when necessity shall enforce, have an heavy and hitter sequel.' The term ' gentleman-farmer ' was not invented in Harrison's time, or we should, we believe, have had a pretty correct description of the occupation of John Shak- spere."

The argument against MALONE'S assertion that SHAKSPERE'S father could not write, is of a similar force ; though its full cogency is not perceived without the fac-simile wood-cut.

"Malone assures as that Shakspere's father could not write. We were per- fectly satisfied that the statement was untrue ; and we have taken some pains, therefore, to examine the evidence which was produced fur this assertion. Put- ting the higher considerations of the poet's education lit of the question, we thought it scarcely consistent with his habitual reverence for those things which we are called upon to honour, that he should make his own father the subject of his satire, and that during his father's lifetime, in the praise which Jack Cade bestows upon those who 'do not use to write their names, but have a mark of their own, like honest plain-dealing men.' Malone tells us that John Shakspere had a mark of his own; and it nearly resembles a capital A, and was perhaps chosen in honour of the lady whom he had married.' He further says, 'Out of nineteen persons who signed a paper relative to one of their body who had been elected Bailiff, ten of whom were Aldermen and the rest Burgesses, seven only could write their names; and among the twelve marksmen is found John Sbakspere ' ; and that he derives his knowledge of the facts from an order dated 27th September 1564. The reader shall judge for himself of the truth of this assertion. We give an exact foe-simile of the order, which a most careful artist was permitted to make for us from the old Council-book of the Corporation of Stratford. (No. 1.) There may be a doubt, the reader may think, whether the mark which nearly re- sembles a capital A ' belongs to 'George Whateley, High Bailiff,' in the first column, or Jhon Shacksper,' in the second column. Malone, who asserts that it belongs to our poet's father, had the Corporation-books in his possession for many years; but he omitted to find an entry of the 29th January 1589, when John Shakspere had ceased to be a member of the Corporation. Ile did not then, of course, record his ignorance in the Corporation-books ; hut George Whateley still uses the same big A. In a quarter of a century he had not learned to write. We give a fac-simile of this entry, which we trust is deci- sive. (No. 2.)" The object of these minute inquiries is to show, that the birth, domestic training, and education of SHAKSPERE, was of a higher rank than scanty notices and loose traditions, with our narrow inter- pretation of them, have assigned to him ; that he was in reality well-born, well-educated, and, though very probably occupied in his youth in employments which are not now followed by gentlemen, yet in those days they involved nothing mechanical or servile, any more than similar occupations do at present in our colonies. Every known or reported incident in the birth, parentage, education, life, character, and behaviour of SHAKSPER.E, is subjected to a considera- tion equally minute with the examples we have adduced, and a flood of light poured upon his life and writings; not from the idle vanity of proving that SHAKSPERE was of a "respectable" family, but to show that he had received a good education, and had the means of seeing society, if not of mixing with it, even from his earliest years— that his youthful opportunities and his juvenile studies were, for example, quite as well fitted for storing his mind with sentiments and images as was the early training of WALTER SCOTT. Modern research has shown it to be highly probable that SHAH.. SPERE'S connexion with the drama began at Stratford ; but the cause of his leaving his native place is still unexplained, unless we follow the old tradition of deer-shooting and Sir THOMAS LUCY'S severity. Mr. KNIGHT discountenances the story ; but he alleges nothing beyond his opinion. Many circumstances, indeed, might take an aspiring young man to the metropolis, who had already connected himself with a pursuit for which he felt a natural aptitude • but if we even disposed of tradition by summarily rejecting it, how can we account for the poet's enmity to Sir THOMAS Leer? What are we to say to Master Shallow ? The admission of the exile in- volves little or nothing derogatory to SHAKSPERE ; for, had he not felt himself to have been deeply wronged by the Justice, it is quite inconsistent with the good feeling ascribed to him, that he should have revenged himself after so many years, and when the banishment from his native place had laid the foundation of his fortune: The lampoon yet preserved may not be genuine ; but had SHAKSPERE tried, in the maturity of his genius, to compress Master Shallow into a line and a half; he could not have done it better- " a justice of peace,

At home a poor scarecrow, in London an ass."

And if there be any truth in the tradition that The Aferry Wives of Windsor was written at the command of ELIZABETH to exhibit Falstaff in love, the poet perpetrated an artful revenge which nothing but great provocation could excuse. If the Queen com- manded the play, the courtiers, we may be sure; would be present at its first representation; and SHAKSPERE, whilst the audience would be on the tiptoe of expectation, fixed upon Master Shallow, in all the absurdity of imbecile anger, to open the play.

"Shallow. Sir Hugh, persuade me not ; I will make a Starchamber matter of it: if he were twenty Sir John Falstaffs, he shall not abuse Robert Shallow esquire."

The mere absurdity of Shallow's passion, heightened by the ex- quisite folly of Slender, would have been little more than general satire had the original been only partially known or suspected. To make assurance doubly sure, the poet goes on to identify him to that heraldry-studying generation, as clearly as if he had named him at length.

'Slender. A gentleman born, master parson, who writes himself armigero, in any bill, warrant, quittance, or ohligation—armigero. "Shallow. Ay, that we do, and have done any time these three hundred years. "Slender. All his successors, gone before him, have done 't ; and all his ancestors, that come after him, may : they may give the dozen white luces in their coat.* "Shallow. It is an old coat."

The Life Of NAPOLEON BONAPARTE, by ANDRE VIEUSSEUX, is a clear, succinct, and impartial narrative of the facts of NAPOLEON'S career ; but too condensed to permit an exposition of the circum- stances, or a development of his character. For example—" Ac- cordingly, he attacked the bridge of Lodi, on the Adda, which the Austrians defended with a numerous artillery : he carried it by the daring bravery of his grenadiers, and the bad dispositions of the Austrian commander, who had not placed his infantry near enough to support his guns." This is scarcely a true account of that cele- brated coup de main on a large scale. The Life, however, is an astonishiog fourpenny-wortb, and forms an excellent compendium of the facto of NAPOLEON BONAPARTE.

• WILLIAM 110wITT, in his researches at Stratford, tells us that these symbols still remain in the coat of arms on the gate of Sir Thomas Limns park.