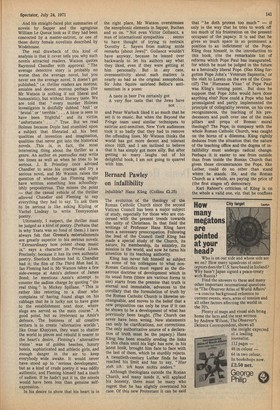 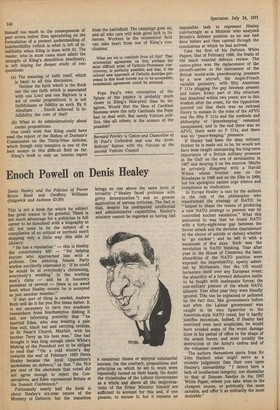 Infallible? Hans Kting (Collins £2.25) The evolution of the theology of the Roman Catholic Church since the second Vatican Council has been a major subject of study, especially for those who are concerned with the present trends towards the unity of Christians. In that field the writings of Professor Hans Kling have been a necessary preoccupation. Following the lead of the Council itself Kling has made a special study of the Church, its nature, its membership, its ministry, its mission in the world, and now he turns his attention to its teaching authority. Kling has never felt himself as subject as some of his colleagues to what nonRoman Catholics must regard as the disastrous doctrine of development which in its usual form (there are various forms in use) starts from the premise that truth is eternal and immutable, advances to the corollary that the formulation of truth by the Roman Catholic Church is likewise unchangeable, and moves to the belief that a new proposition can only be true if it can be shown to be a development of what has previously been taught. (The Church can never have been wrong. New statements can only be clarifications, not corrections. The only authoritative source of a declaration of truth must be the papacy.) Hans Ming has been steadily eroding the links in this chain until his logic has now, in his latest book, brought him face to face with the last of them, which he sturdily rejects. A twentieth-century Luther finds he has reached his limit and has to say, "Hier steh ich: ich hann nichts anders."

Although theologians outside the Roman Church, and many inside it, will applaud his honesty, there must be many who regret that he has slightly overstated his case. Of this new Protestant it can be said

that "he doth protest too much" — if only in the way that he tries to work off too much of his frustration on the present occupant of the papacy. It is sad that he gives so much space in so prominent a position to an indictment of the Pope. Ming does himself, in the introduction to this book, cite the remarkable list of reforms which Pope Paul has inaugurated, for which he must be judged in the future as a heroically liberal Pope. (Has Ming forgotten Pope John's ' Veterum Sapientia,' or the visit to Loreto on the eve of the Council?) The ' Humanae Vitae' of Pope Paul was Kiing's turning point. But does he suppose that Pope John would have done anything else? How could a Pope who had promulgated and partly implemented the principle of collegiality reverse, on his own recognizances, the teaching of his predecessors and push over one of the main pillars and props of Roman moral theology? The Pope, in company with the whole Roman Catholic Church, was caught on the horns of a dilemma. Ming rightly deduces from the situation that the nature of the teaching office and the dogma of infallibility must undergo radical change. Perhaps it is easier to see from outside than from inside the Roman Church that given those circumstances the Pope, like Luther, could do no other than stand where he stands. He, and the Roman Church as a whole, are paying the price of (the first stages of) democracy.

Karl Rahner's criticism of Kling is on the whole a valid one, viz, that he confines himself too much to the consequences of past errors rather than speculating on the formulation of a present understanding of indefectibility (which is what is left of infallibility when Kling is done with it). The reader, who in most cases must admit the strength of Ming's demolition machinery, is left hoping for deeper study of two questions: (a) The meaning of faith itself, which is basic to all this discussion. Neither the faith which is the Rock nor the one faith which is associated with one Lord and one Baptism is a set of credal propositions. It is not faithfulness or fidelity as such. By it Abraham . . . Enoch achieved. Is infallibility the core of that?

(b) What to do administratively about credal propositions.

One could wish that Kting could have read the report of the Bishop of Durham's Commission on the Thirty-Nine Articles, which though only tentative is one of the best essays in this difficult field so far.

Kting's book is only an interim report from the battlefield. The campaign goes on, and all who care will wish good luck to its heroes. Workers in the ecumenical field can take heart from one of Kting's conclusions:

Pope Paul's own conception of the future of the papacy is probably much closer to Kting's blue-print than he imagines. Would that the likes of Cardinal Suenens were the only Cardinals the Pope had to deal with. But surely Vatican politics, like all others, is the science of the possible?

Bernard Pawley is Canon and Chancellor of St Paul's Cathedra/ and was the Archbishops' liaison with the Vatican at the second Vatican Council impossible task to represent Healey convincingly as a Minister who analysed Britain's defence position as no one had done before and then carried through the conclusions at which he had arrived.

Take the first of his Defence White Papers, that of February 1966, the fruits of the much vaunted defence review. The centre-piece was the replacement of the aircraft-carrier as the instrument of the British world-wide peacekeeping presence by a new aircraft, the Anglo-French variable geometry, with fifty American F 111s plugging the gap between present and future. Every part of this structure had dissolved within two years; nor is this wisdom after the event, for the Opposition pointed out that there was no rational theory to sustain it: the roles of the AFVG and the fifty F ills and the methods and philosophy of 'peacekeeping' remained unexplained, and in the end there was no AFVG, there were no F 11 ls, and there was no 'peace-keeping' presence.

If Healey had been the deep military thinker he is made out to be, he would not have been caught announcing the long-term importance of a British military presence in the Gulf on the eve of devaluation in 1967 and denying it on the morrow. Maybe he privately disagreed with a Harold Wilson whose frontier was on the Himalayas in 1966 and on the Elbe in 1968; but his apologists cannot urge silence and compliance as vindication.

In Europe Healey is cast by the authors in the role of the philosopher who transformed the strategy of NATO: he "helped to shape the means of producing a new NATO strategy to prevent war by controlled nuclear escalation." What this amounted to was that he found NATO with a forty-eight-hour gap between the Soviet attack and the decision (tantamount to the choice of suicide or defeat) whether to go nuclear '; and he left it with a maximum of five days. Such was the revolution in NATO thinking. Year after year in the House of Commons the basic absurdities of the NATO position were exposed: the improbability, openly admitted by McNamara, that the US would incinerate itself over any European event; the absurdity of a forward defensive battle to be fought with inadequate forces; the non-military posture of the whole NATO alliance. Year after year they were blandly ignored. This can be explained or palliated by the fact that, like governments before and after, the Labour government was caught in its own lipservice to the American-style NATO creed; but it hardly justifies encomium. Indeed, if Healey had exercised even tacit scepticism, he would have avoided some of the worst damage done in his period of office to the shape of the armed forces, and most notably the destruction of the Army's cadres and of the volunteer reserve.

The authors themselves quote from Sir John Hackett what might serve as a sounder judgement than their own upon Healey's stewardship: "1 detect here a lack of intellectual integrity, not dissimilar to that of Duncan Sandys in his 1957 White Paper, where you take what is the cheapest course, or politically the most saleable, and offer it as militarily the most desirable."