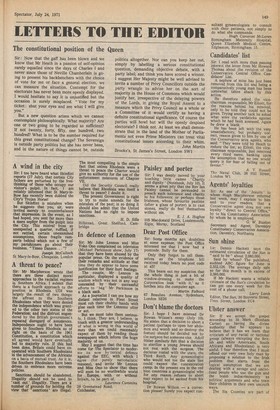 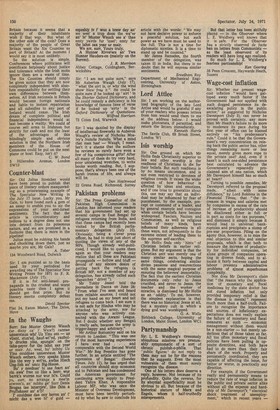 Sir: If we accept the gospel according to St Mark (Bonham Carter) as having the divine authority that he appears to believe that it has we learn that criticism of any racial or national group (always excepting the British and white Americans, South Africans and Rhodesians) is very sinful. I fear therefore that I must offend our very own holy man by proposing a solution to the Irish problem that starts from the logical assumption that we are dealing with a savage and uncivilized people who use the gun and the bomb indiscriminately as political arguments and who train their children in their own uncouth ways.

The Six Counties are part of

Britain because it seems that a majority of their inhabitants wish it that way. But what of the other side of the coin? Does a majority of the people of Great Britain want the Six Counties as part of Britain? At the moment I would say it is most unlikely. So the solution is simple. Conferences where politicians will pontificate helplessly about justice and tolerance while the Irish mobs ignore them are a waste of time. The Six Counties should simply be given notice that they are now completely independent with absolute responsibility for settling their own differences between themselves. All Irish nationals in Britain would become foreign nationals and liable to instant repatriation and all subsidies to any part of Ireland would cease. The Irish dream of complete political and financial independence would at last become a reality. We could of course sell arms to Irishmen but strictly for cash and not the least of the advantages of this blindingly simple and obvious solution is that the Northern Irish members of the House of Commons could be put on the next plane or boat. Easy, isn't it? C. W. Bond 5 Hillersdon Avenue, London SW13