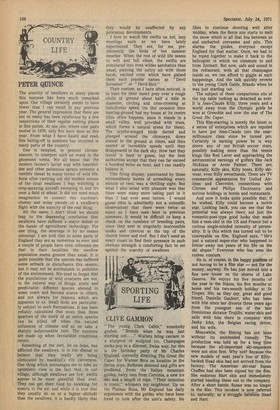 "The young Clark Gable," somebody gushes, " Brando when he was just starting out...." Waiters bring caviare in a sturgeon of sculpted ice. Champagne corks pop in a discreet, Swiss way, for this is the birthday party of Mr Charles Englund, currently directing The Great Ski Caper for Warner Bros on location in the Swiss Alps. Balloons descend and gifts are proffered. From the Italian mountain guides, hairy men from Cervinia, a new ice axe and a length of rope. "Their intention is ironic," whispers my neighbour. Up on the Plateau Rosa, Mr Englund has daily arguments with the guides who have been hired to look after the unit's safety. He likes to continue shooting well after midday, when the fierce sun starts to melt the snow which is all that lies between us and uncharted crevasses and pits. This alarms the guides, everyone except Englund for that matter. Once, we had to be roped together to make it back to the helicopter in which we commute to and from Zermatt. But now, safe and sound in the restaurant, with all that champagne inside us, we can afford to giggle at such happenings. And the talk quickly reverts to the young Clark Gable, Brando when he was just starting out.

The subject of these comparisons sits at the top table looking as detached as ever. It is Jean-Claude Killy, three years and a world away from the Olympic golds he won at Grenoble and now the star of The Great Ski Caper.

This film-starring is merely the latest in a series of enterprises which are reputed to have put Jean-Claude into the nearmillionaire class since he turned pro. Certainly in earning power he is way above any of our British soccer stars, possibly making more than the tennis kings like Rod Laver and approaching the astronomical earnings of golfers like Jack Nicklaus or Arnie Palmer. There are, naturally, Killy skis, Killy boots, Killy skiwear, even Killy sweatbands. There are TV commercial appearances for United Airlines and Chevrolet, connections with Citroen and Philips Electronics and serious holdings in hotels and restaurants.

And now it looks quite possible that, if he wished, Killy could become a movie star. Looking back, you can see that the potential was always there, not just the romantic-poet-type good looks that made him a teen-idol in the US and France but a curious single-minded intensity of personality. It is this which has turned out to be conveyable on film. Englund says, "He's just a natural super-star who happened to fritter away ten years of his life on the ski slopes." Everyone who has seen the rushes concurs.

He is, of course, in the happy position of not having to be a film star — not for the money, anyway. He has just moved into a fine new house on the shores of Lake• Geneva. He enjoys his five months of the year in the States, his five months at home and his two-month holiday at St Tropez. His, as they say, great and good friend, Danielle Gaubert, who has been with him since her divorce three years ago from the youngest son of the late Dominican dictator Trujillo, water-skis and sails with him there in company with Jacky Ickx, the Belgian racing driver, and his wife.

Meanwhile, the filming has not been without its unintended comedy. The production was held up for a long time because the all-important ski-sequences were not shot first. Why not? Because the new models of next year's line of Killybacked Head skis had not arrived from the factory. The American ski-star Susan Chaffee had also been signed for the film. She endorses Hart skis and immediately started handing these out to the company. After a short battle, Susan was no longer in the film. This incident is now referred to, naturally, as a struggle between Head and Hart.