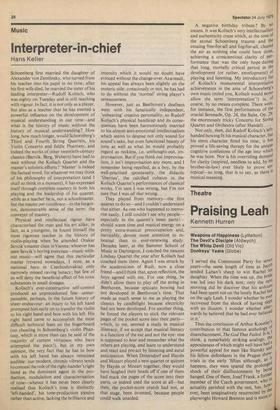 Hans Keller Schoenberg first married the daughter of Alexander von Zemlinsky, who turned from his teacher into his pupil in no time; after his first wife died, he married the sister of his leading interpreter—Rudolf Kolisch, who was eighty on Tuesday and is still teaching with vigour. In fact, it is not only as a player, but also as a teacher that he has exerted a powerful influence on the development of musical understanding in our time—and what is the history of music without the history of musical understanding? How long, how much longer, would Schoenberg's Third and Fourth String Quartets, his Violin Concerto and fiddle Phantasy, and indeed the works of other twentieth-century classics (Bartok, Berg, Webern) have had to wait without the Kolisch Quartet and the master's soloistic efforts? 'Master' is indeed the factual word, for whatever we may think of his philosophy of interpretation (and I shall so think in a moment), it has expressed itself through complete mastery in both his playing and the leadership of his quartet, while as a teacher he is, not a schoolmaster, but the master par excellence—in the forgotten, demonstrable sense of the term: the conveyer of mastery.

Physical and intellectual rigour have characterised the man and his art alike; in fact, as a youngster, he found himself the most rigorous teacher in the history of violin-playing when he attended Otakar Sevcik's master class in Vienna: whoever has seen Sevcik's boring exercises—music without music—will agree that this particular master (revered nowadays, I note, as a national hero in Czechoslovakia) only narrowly missed raving lunacy; but few of us will deny the beneficial effect of his toxic substances in small dosages.

Kolisch's ever-constructive self-control produced an unprecedented feat—unsurpassable, perhaps, in the future history of sheer endeavour: an injury to his left hand prompted him early on to transfer the violin to his right hand and bow with his left. His right hand came to accomplish the most difficult technical feats on the fingerboard (no cheating in Schoenberg's violin Phantasy, which is more than can be said of the majority of current virtuosos who have attempted the piece!), but in my own opinion, the very fact that he has to bow with his left hand has always remained audible: our modern, chronic vibrato tends to conceal the role of the right-hander's right hand as the dominant agent in the production, modulation and characterisation of tone—whence it has never been clearly realised that Kolisch's tone is distinctly 'left-handed', his tone-production passive rather than active, lacking the brilliance and intensity which it would no doubt have evinced without the change-over. As a result, his appeal has always been slightly on the esoteric side: consciously or not, he has had to do without the 'normal' string player's sensuousness.

However, just as Beethoven's deafness went with his fanatically independent, `unhearing' creative personality, so Rudolf Kolisch's physical handicap and its consequences have been harmoniously married to his almost anti-emotional intellectualism which seems to despise not only sound for sound's sake, but even functional beauty of tone as well as what he would probably regard as reckless, i.e. unthought-out, improvisation. But if you think out improvisation, it isn't improvisation any more, and I remember being repelled, as a boy, by the well-practised spontaneity, the didactic 'liberties', the calcified rubatos in the Kolisch Quartet's performances of classical works. I'm sure I was wrong, but I'm not sure that I was all that wrong.

They played from memory—the first quartet to do so—and I couldn't understand that either. As one who happened to memorise easily, I still couldn't see why people— especially in the quartet's inner parts!— should waste time and musical energy on a pretty extra-musical preoccupation and, inevitably, devote more attention to rehearsal than to ever-renewing study. Decades later, at the Summer School of Music in Dartington, I coached the nascent Lindsay Quartet the year after Kolisch had coached them there. Again I was struck by the academicism of Rudi, now a close friend—and [think that, upon reflection, the boys agreed with me. For one thing, he didn't allow them to play off the string in Beethoven, because spiccato bowing had not developed in Beethoven's time. That made as much sense to me as playing the classics by candlelight because electricity had not been developed. For another thing, he forced the players to stick the relevant pages of the pocket score into their parts— which, to me, seemed a study in musical illiteracy, if we accept that musical literacy is a function of the ear and not the eye: one is supposed to hear and remember what the others are playing, and learn to understand and react and pre-act by listening and aural anticipation. When Dittersdorf and Haydn and Mozart played a new quartet or quintet by Haydn or Mozart together, they would have laughed their heads off if one of them had stuck the pages of the score into their parts, or indeed used the score at all—but then, the pocket-score crutch had not, at that stage, been invented, because people' could walk unaided. A negative birthday tribute? By oc means. It was Kolisch's very intellectualisnl and authenticity craze which, at the time of the atonal Schoenberg trauma and the ensuing free-for-all and fog-for-all, cleared the air as nothing else could have done, achieving a conscientious clarity of performance that was the only hope during that long, mortally critical period in the development (or rather, envelopment) of playing and listening. My introductory list of Kolisch's monumental interpretative achievements in the area of Schoenberg's own music (mind you, Kolisch would never allow the term "interpretation'!) is, of course, by no means complete. There were. for instance, the first performances of the crucial Serenade, Op. 24, the Suite, Op. 29, the enormously tricky Concerto for String Quartet and Orchestra (after Handel) . Not only, then, did Rudolf Kolisch's lefthanded bowing fit his musical character, but his stern character fitted his time; it has proved a life-saving therapy for the unique cognitive confusions of the age into which, he was born. Nor is his overriding demand for clarity (inspired, needless to add, by his brother-in-law) ever likely to prove untopical—so long, that is to say, as there is musical meaning.