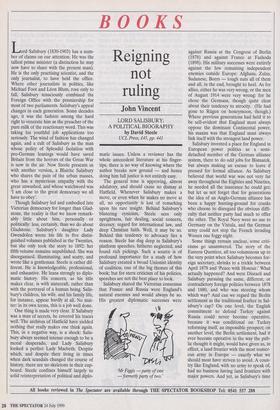 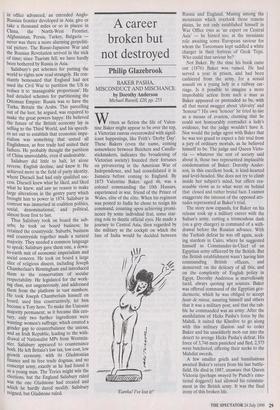 LORD SALISBURY: A POLITICAL BIOGRAPHY by David Steele UCL Press, £45, pp. 441 Lord Salisbury (1830-1903) has a num- ber of claims on our attention. He was the tallest prime minister (a distinction he may now have to share with the present man). He is the only practising scientist, and the only journalist, to have held the office. Where other journalists in politics, like Michael Foot and Uon Blum, rose only to fall, Salisbury tenaciously combined the Foreign Office with the premiership for most of two parliaments. Salisbury's appeal changes in each generation. Some decades ago, it was the fashion among the hard right to venerate him as the preacher of the pure milk of the reactionary word. This was taking his youthful job applications too seriously. The wind of fashion has changed again, and a cult of Salisbury as the man whose policy of Splendid Isolation with pro-German leanings would have saved Britain from the horrors of the Great War is now in the air. Now Steele presents us with another version, a Blairite Salisbury who shares the pain of the urban masses, who has a mysterious empathy with the great unwashed, and whose watchword was `I am close to the great democracy we all have to obey'.

Though Salisbury led and embodied late Victorian democracy for longer than Glad- stone, the reality is that we know remark- ably little about him, personally or politically: less, certainly, than we do about Gladstone. Salisbury's daughter Lady Gwendolen wrote his life in five distin- guished volumes published in the Twenties, but she only took the story to 1892: her fifth volume remains unpublished. She was disorganised, illuminating, and scatty, and wrote like a gentleman. Steele is rather dif- ferent. He is knowledgeable, professional, and exhaustive. He leans strongly to diplo- matic history. His concern, as his title makes clear, is with statecraft, rather than with the portrayal of a human being. Salis- bury's children, his wife, and his family life, for instance, appear hardly at all. No mat- ter: in its own terms, this is a job well done.

One thing is made very clear. If Salisbury was a man of secrets, he covered his traces well. The archives of Hatfield have yielded nothing that really makes one think again. This, in a negative way, is a shock: Salis- bury always seemed intense enough to be a moral desperado, and Lady Salisbury looked a perfect Lady Macbeth. Despite which, and despite their living in times when dark scandals changed the course of history, there are no skeletons in their cup- board. Steele confines himself largely to solid reinterpretation of political and diplo- matic issues. Unless a reviewer has the whole antecedent literature at his finger- tips, there is no way of knowing where the author breaks new ground — and hence doing him full justice is not entirely easy.

The general tone is approving, almost adulatory, and should cause no dismay at Hatfield. Whenever Salisbury makes a move, or even when he makes no move at all, no opportunity is lost of remarking upon his rare insight. Behind Salisbury's blistering cynicism, Steele sees only uprightness, fair dealing, social concern, decency, regard for international law, and deep Christian faith. Well, it may be so. Behind this tendency to advocacy lies a reason. Steele has dug deep in Salisbury's platform speeches, hitherto neglected, and found rich pickings. Such a source is of profound importance for a study of how Salisbury created a broad Unionist identity of coalition, one of the big themes of this book; but for stern criticism of his policies, speeches are not the best place to look.

Salisbury shared the Victorian consensus that France and Russia were England's natural enemies and would always be so. His greatest diplomatic successes were Mr Figgis party of one — formerly party of two.' against Russia at the Congress of Berlin (1878) and against France at Fashoda (1898). His military successes were entirely against the few remaining independent enemies outside Europe: Afghans, Zulus, Sudanese, Boers — tough nuts all of them and all, in the end, brought to heel. As for allies, either he was very wrong, or the men of August 1914 were very wrong: for he chose the Germans, though quite clear about their tendency to atrocity. (He had gone to Riigen on honeymoon, though.) Where previous generations had held it to be self-evident that England must always oppose the dominant Continental power, his maxim was that England must always link itself with the strongest land power.

Salisbury invented a place for England in European power politics as a semi- detached member of the German alliance system, there to do odd jobs for Bismarck, but always making an excuse to leave if pressed for formal alliance. As Salisbury believed that world war was not very far away throughout the Eighties and Nineties, he needed all the insurance he could get; but let us not forget that for generations the idea of an Anglo-German alliance has been a happy hunting-ground for cranks who choose to disregard the obvious diffi- culty that neither party had much to offer the other. The Royal Navy were no use to Germany on the Vistula, and the German army could not stop the French invading Wessex one foggy night.

Some things remain unclear, some criti- cisms go unanswered. The story of the Eastern Question, all too voluminous up to the very point when Salisbury becomes for- eign secretary, shrinks to a trickle between April 1878 and 'Peace with Honour.' What actually happened? And were Disraeli and Salisbury pursuing the same, different, or contradictory foreign policies between 1878 and 1880, and who was steering whom which way? And can we regard the Berlin settlement as the traditional feather in Sal- isbury's cap? On one level, the English commitment to defend Turkey against Russia could never become operative, because it was conditional on Turkey reforming itself, an impossible prospect; on another level, the Berlin settlement, had it ever become operative in the way the pub- lic thought it might, would have given us, in effect, a land frontier with the most numer- ous army in Europe — exactly what we should most have striven to avoid. A coun- try like England, with no army to speak of, had no business having land frontiers with major powers. And yet, as Salisbury's time in office advanced, an extended Anglo- Russian frontier developed in Asia, give or take a thousand miles or so in places: in China, the North-West Frontier, Afghanistan, Persia, Turkey, Bulgaria never was there a more alarming geopoliti- cal picture. The Russo-Japanese War and the Russian Revolution arrived in the nick of time; since Tsarism fell, we have hardly been bothered by Russia in Asia.

Salisbury's pet schemes for putting the world to rights now read strangely. He con- stantly bemoaned that England had not used the Civil War to partition the US to reduce it to 'manageable proportions'. He had detailed schemes for partitioning the Ottoman Empire: Russia was to have the Turks, Britain the Arabs. This parcelling out of the loot, he argued, was required to make the great powers happy. He believed the future of the British economy lay in selling to the Third World, and his speech- es set out to establish that economic impe- rialism was something that united all Englishmen, as free trade had united their fathers. He probably thought the partition of China unavoidable, even if undesirable.

Salisbury did little to halt, let alone reverse, English decline, and knew it. He achieved more in the field of party identity, where Disraeli had had only qualified suc- cess. Disraeli knew what he liked, and liked what he knew, and saw no reason to make large alterations in the gentry party which brought him to power in 1874. Salisbury in contrast was immersed in coalition politics, social, denominational, and political, almost from first to last.

Thus Salisbury took on board the sub- urbs; he took on board business; he retained the countryside. Suburbs, business and countryside together made a natural majority. They needed a common language to speak; Salisbury gave them one, a down- to-earth mix of economic imperialism and social concern. He took on board a large slice of religious dissent, including Joseph Chamberlain's Birmingham and introduced them to the conservatism of secular respectability. He legislated for the work- ing class, not ungenerously, and addressed them from the platform in vast numbers. He took Joseph Chamberlain himself on board, used him constructively, let him become a Tory hero. To make the Unionist majority permanent, as it became this cen- tury, only two further ingredients were wanting: women's suffrage, which created a gender gap to counterbalance the unions, and an Irish Republic, leading to the with- drawal of Nationalist MPs from Westmin- ster. Salisbury appeared to countenance both. He left Britain's low tax, low cost, low growth economy, with its Gladstonian finance and its free trade dogmas, and no Conscript army, exactly as he had found it as a young man. The Tories might win the elections, but the England Salisbury ruled was the one Gladstone had created and which he hardly dared modify. Salisbury reigned, but Gladstone ruled.