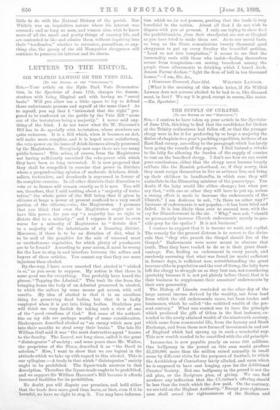 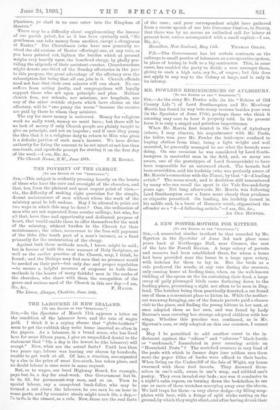 THE SUPPLY OF CURATES.

[To THE EDITOR OF THE " SPECTATOR:] Sin,—I confess to have taken up your article in the Spectator of June 17th, thinking to find that the candidates for Orders at the Trinity ordinations had fallen off, or that the younger clergy were in for it for preferring by so large a majority the- duties of chaplain to a year's yachting expedition, to those of an East-End curacy, according to the paragraph which has lately been going the rounds of the papers. I find instead a rebuke to the laity for allowing the burden of the supply of curates to rest on the beneficed clergy. I don't see how we can resist your conclusions, either that the clergy must become largely

celibate like the Romish priesthood, or, if they marry, that they must resign themselves to live as artisans live, and bring up their children to handicrafts, in which case they will assimilate to the Dissenting minister of the poorer type. You doubt if the laity would like either change ; but when you say that, "with one or other they will have to put up, unless a strong effort is made to increase the endowments of the Church," I am desirous to ask, "Is there no other way ?" Increase of endowments is not popular,—it has been tried and failed. It is less likely than ever to succeed now, with the cry for Disendowment in the air. "Why," men ask, "should we permanently increase Church endowments merely to pro- vide prey for the spoiler ? It is not business."

I venture to suggest that it is income we want, not capital. The remedy for the present distress is to revert to the divine rule that "they who preach the Gospel should live of the Gospel." Endowments were never meant to obscure that truth. That they have tended to do so is their great disad- vantage. For, finding an endowment in every parish, and carelessly assuming that what was found (or made) sufficient in former days, is sufficient now, notwithstanding the great increase alike in population and the cost of living, the laity have left the clergy to struggle on as they best can, not considering (probably because it is not put plainly before them) that it is their business to supplement their ancestors' endowments by their own generosity.

The Bishop of Lincoln reminded us the other day of the large annual income derived by the wealthy, not from land from which the old endowments came, but from trades and- businesses, which he called "the untithed wealth of the pre- sent century." What was wanted was to have the principle which produced the gift of tithes in the first instance, ex- tended to the newly attained wealth of the nineteenth century,. which came from commercial life, from the factory and Stock Exchange, and from those new forms of investment in and out of England which had sprung up in such a wonderful way. This new wealth needed to be sanctified with the old principle.

Income-tax is now payable yearly on some 600 millions. One halfpenny in the pound on this sum would produce £1,250,000, more than the million raised annually in small sums by different clubs for the purposes of football, to which the Archbishop of Canterbury lately alluded, and upon which he is supposed to have cast longing eyes for the Additional Curates' Society. But one halfpenny in the pound is not the old plan, or the Scripture plan, of giving. We can find nowhere any indication that the CLristian's offering should be less than the tenth which the Jew paid. On the contrary, we are told on the Highest Authority, "Except your righteous- ness shall exceed the righteousness of the Scribes and Pharisees, ye shall in no case enter into the Kingdom of Heaven."

There may be a difficulty about supplementing the income of our parish priest, for as it has been cynically said, "No gentleman can take money from another, except a clergyman at Easter." But Churchmen (who have now generally re- vived the old custom of Easter offerings) can, at any rate, as you have pointed out, lighten the burden which at present weighs very heavily upon the beneficed clergy, by gladly pro- viding the stipends of their assistant-curates. Churchwardens might devote one.third of the Sunday offertories in the year to this purpose, the great advantage of the offertory over the subscription-list being that all can join in it. Church officials need not fear that their own salaries will run short. No one suffers from acting justly, and congregations will loyally support those who act upon principle and plan. Neither church fees, nor schools, nor missions, nor hospitals, nor any of the other outside objects which have claims on the .offertory, will be "one penny the worse" because the curates are paid by those to whom they minister.

The cry for more money is universal. Money for religious work we sadly want, money we must have ; but there will be no lack of money if only Church people are plainly taught to give on principle, and not on impulse ; and if once they grasp the idea that it is a religious duty to return to Him who gives it a definite portion of each man's income. We have divine authority for fixing the amount to be set apart at not less than one-tenth, and apostolic precept for storing it on the first day of the week.—I am, Sir, &c., The Church House, S.W., June 19th. F. H. HOOKE.