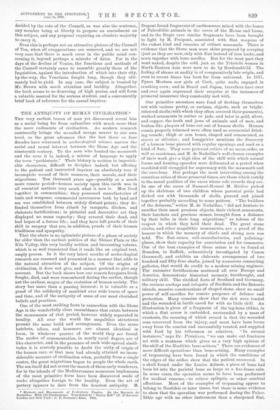 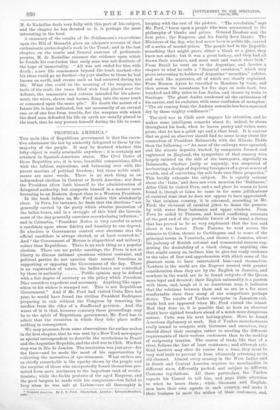 Page 9, 24 June 1893 — THE ANTIQUITY OF HUMAN CIVILISATION.* THE very earliest traces of
Close

THE ANTIQUITY OF HUMAN CIVILISATION.* THE very earliest traces of

man yet discovered reveal him as a social being far from unfamiliar with much more than the mere rudiments of civilisation. As modern research continually brings the so-called savage nearer to our own level, so the great advances that the last three or four decades have witnessed in archmological science narrow the social and moral interval between the Stone Age and the nineteenth century. To the men who hunted the mammoth and the urus it is, indeed, a misuse of language to apply the term "prehistoric." Their history is written in imperish- able characters, difficult to decipher indeed, but offering to the patient and instructed inquirer an absolutely true if incomplete record of their manners, their morals, and their migrations. Ten thousand years ago—possibly at a much more remote period—human society upon this earth was in all essential matters very much what it now is. Men lived together in communities ; they possessed manufactories of tools and weapons; commercial intercourse both by land and sea was established between widely distant points ; they de- fended themselves from attack by ramparts, ditches, and elaborate fortifications ; in pictorial and decorative art they displayed no mean capacity ; they revered their dead, and had hopes of a future life ; and they have left proofs of their skill in surgery that are, in addition, proofs of their human kindliness and sympathy.

That the above is no optimistic picture of a phase of society far older than the earliest polities of the Shinar Plain or the Nile Valley, this very lucidly written and interesting volume, which is so well translated that it reads like an original text, amply proves. In it the very latest results of archmological research are resumed and presented in a manner that adds to the natural attraction of the subject. Of the origins of civilisation, it does not give, and cannot pretend to give any account. But the book shows how our remote foregoers lived, fought, died, and were remembered during the earlier, though not the earliest, stages of the evolution of human society. The story has more than a passing interest ; it is valuable as a proof of the solidarity of mankind over wide tracts of space and time, and of the antiquity of some of our most cherished beliefs and practices.

One of the most striking facts in connection with the Stone Age is the wonderfully close resemblance that exists between the monuments of that period, however widely separated in locality. All over the world the megalithic structures present the same build and arrangement. Even the stone hatchets, adzes, and hammers are almost identical in form, in whatever quarter of the world they are found.

The modes of ornamentation, in nearly equal degree, are of like character, and in the presence of such wide-spread simili- tudes it is scarcely possible to doubt the unity of origin of the human race, or that men had already attained no incon- siderable measure of civilisation when, probably from a single centre, the great migrations began to people the whole earth.

The sea itself did not arrest the march of these early wanderers, for in the islands of the Mediterranean numerous implements of the most primitive form have been discovered made of rocks altogether foreign to the locality. Even the art of pottery appears to date from the hoariest antiquity. M.

* Manners and Monuments of Prehistoric Peoples. By the Marquis do Nadaillae. With 113 Illustrations. Translated by "Nancy Boll" (N. D'Anvers). London and New York G. P. Putnam 's Bons, 1892. Dupont found fragments of earthenware mixed with the bones of Palmolithic animals in the caves of the Meuse and Lesse, and in the Engis cave similar fragments have been brought to light by M. Fraipont, associated with flint weapons of the rudest kind and remains of extinct mammals. There is evidence that the Stone men wore skins prepared by scraping (just as they are now, only with flint instead of iron tools), and sewn together with bone needles. But for the most part they went naked, despite the cold, just as the Tchutchi women in North-Eastern Asia were seen to do by Nordenskiiild. The feeling Of shame at nudity is of comparatively late origin, and even in recent times has been far from universal. In 1617, Fynes Morison saw girls at Cork, quite nude, engaged in crushing corn ; and in Brazil and Japan, travellers have over and over again expressed their surprise at the instances of primeval innocence they constantly met with.

Our primitive ancestors were fond of decking themselves out with various pretty, or carious, objects, such as bright- coloured shells (with which they often covered their garments), worked ornaments in amber or jade, and later in gold, silver, and copper, the teeth and jaws of animals and of men, and button-like plaques of bone cut out of human skulls. Human crania properly trimmed were often used as ceremonial drink- ing vessels ; thigh or arm bones, shaped and ornamented, as H hives or stilettos; and Longp6rier mentions the discovery of a human bone pierced with regular openings and used as a kind of flute. They were pictorial artists of no mean order, as well as musicians, and M. de Nadaillac's well-chosen examples of their work give a high idea of the skill with which animal forms and bunting episodes were delineated at a period when mankind still struggled for supremacy with the mammoth and the cave-bear. But perhaps the most interesting among the countless relics of those primeval times, are those which testify to the moral qualities of the races whose sole records they are. In one of the caves of Baouss6-Rouss6 M. Riviere picked up the skeletons of two children whom parental pride had decked out with thousands of shells, pierced and joined together probably according to some pattern. "The builders of the dolmens," writes M. de Nadaillao, "did not hesitate to sacrifice their most precious objects, their richest ornaments, their hatchets and precious stones, brought from a distance by their tribe in their long migrations," as tokens of the respect in which they held their dead. The great stone circles, and other megalithic monuments, are a proof of the honour in which the memory of chiefs and strong men was held. The flint.mines, celt-manufactories, and polishing- places, show their capacity for association and for commerce. One of the best examples of these mines is to be found at Brandon, in Suffolk, exhaustively investigated by Canon Greenwell, and exhibits an elaborate arrangement of two hundred and fifty-four shafts, joined by numerous connecting galleries, that would do credit to a modern mining engineer. The extensive fortifications scattered all over Europe and America, demonstrate historical memory, forethought, and military skill. The vitrified forts of Scotland and Germany, the curious nurliags and talayote8 of Sardinia and the Balearic islands, massive constructions of shaped stone, show no small power of self-sacrifice for remote purposes of defence and protection. Many remains show that the sick were tended and the wounded in battle oared for with no little skill. An illustration is given of a fragment of the leg-bone (tibia), in which a flint arrow is embedded, surrounded by a mass of exostosis, the meaning of which record is that the wounded man recovered from the injury, and must have been borne away from the combat and successfully treated, and supplied with food by his tribesmen or relatives. "In several instances," says Dr. Pruniei es, "we can make out fractures set with a neatness which gives us a very high opinion of the skill of the Neolithic bone-setters." There are evidences of more difficult operations than bone-setting. Many examples of trepanning have been found in which the conditions of the edges of the orifice show that the patient recovered. In a skull found under the Lozere dolmen, a piece of bone had been let into the parietal bone as large as a five-franc coin. In some cases, the operation seems to have been performed for medical reasons,—to relieve epileptic or other cerebral affections. Most of the examples of trepanning appear to belong to Neolithic or later times, but there is some evidence to show that the operation was performed during the Pal89o- MIA° age with no other instrument than a sharpened flint.

M. de Nadaillac deals very fully with this part of his subject, and the chapter he has devoted to it, is perhaps the most interesting in the book.

A summary of the results of Dr. Schliemann's excavations upon the Hill of Hissarlik gives an adequate account of that enthusiastic archa3ologist's work in the Troad ; and in the last chapter, on the tombs and funeral customs of prehistoric peoples, M. de Nadaille.c resumes the evidence upon which he founds his conclusion that early man was not destitute of the hope of immortality. "All was not ended for him with death ; a new life commences beyond the tomb, marked—for his ideas could go no further—by joys similar to those he had known on earth, and events such as had occurred during his life. What else could be the meaning of the weapons, the tools of his craft, the vases filled with food placed near the defunct, the ornaments and colours intended for his adorn- ment, the wives, slaves, and horses, flung into the same tomb or consumed upon the same pile." No doubt the notion of a future life is here indicated, but not necessarily of an eternal one, or of one free from trouble, for the weapons with which the dead man defended his life on earth are usually placed in the tomb, that he may protect himself during the life to come.