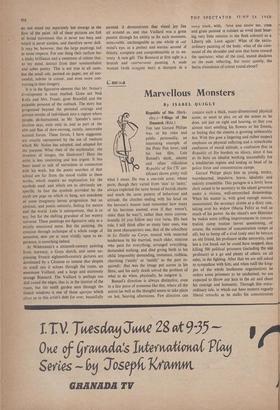 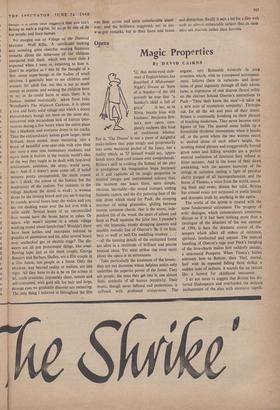 By ISABEL QUIGLY Republic of Sin. (Berk- eley.)—Village of the Damned. (Ritz.) THE late Gerard Philipe was, in his roles and public personality, an interesting example of the Peter Pan lover, and his last film, Luis Bunuel's dank, steamy and often ridiculous Republic of Sin ('X' cer- tificate) shows pretty well what I mean. He was a one-role actor, whose parts, though they varied from 'nice' to 'nasty,' always exploited the same brand of boyish charm and much the same pattern of behaviour and attitude, the clinches ending with his head on the heroine's bosom (and remember how many of his heroines seemed, even if they weren't, older than he was?), rather than more conven- tionally (if you follow me) vice versa. His best role, I still think after so many later ones, was his most characteristic one, that of the schoolboy in Le Diable au Corps, treated with maternal tenderness by his married, much older, mistress who paid for everything, arranged everything, demanded nothing, and died giving birth to his child. Impossibly demanding, immature, ruthless, charming ('nicely' or 'nastily' as the part re- quired): that was the image put across in his films, and his early death solved the problem of what to do when, physically, he outgrew it.

Bunuel's direction is always distinctive, even in a fair piece of nonsense like this, where all the action (as well as the thought) seems to take place on hot, heaving afternoons. Few directors can conjure such a thick, many-dimensional physical scene, or seem to play on all the senses as he does. not just on sight and hearing, so that you almost start smelling his flowers or his forests, or feeling that the cinema is growing unbearably hot. With this goes a lingering and rather suspect emphasis on physical suffering and a remarkable confusion of moral attitude, a confusion that in Republic of Sin borders on idiocy, since it has as its hero an idealist working successfully for a totalitarian regime and ending as head of its police force and concentration camps.

Gerard Philipe plays him as young, tender, warmhearted, impulsive, brave, idealistic and entirely irresistible. This paragon is a lowly born clerk raised to be secretary to the island governor under a vicious, well-entrenched dictatorship, When his master is, with good enough reason, assassinated, the secretary climbs at a dizzy rate, taking over his widow (Maria Felix) as well as much of his power. As the island's new Himmler he makes some trifling improvements in concen- tration camp routine (never questioning, of course, the existence of concentration camps at all), but to bump off a rival (only one) he betrays an old friend, his professor at .the university, and lets a riot break out he could have stopped, thus killing 500 political prisoners (including the old professor) at a go and plenty of others, on all sides, in the fighting. After that we are still asked to sympathise with him, and when (still the king- pin of the whole loathsome organisation) he orders some prisoners to be unchained, we are expected to throw our hats in the air and cheer his courage and humanity. Through this extra- ordinary tale, in which our hero mutters vaguely liberal remarks as he stalks his concentration Catlips, IL is .level once suggesilA that you can't belong to such a regime, let &tor be one of its top people, and keep human.

We trooped out of Village of the Damned (director: Wolf Rilla, 'A certificate) looking and sounding quite cheerful. making facetious remarks about the behaviour of our children compared with these. which was more than I expected when I went in. expecting 'to hate it. Don't be repelled as I was by the thought of a film about super-beings in the bodies of small children. I generally hate to see children used creepily for adult fun. but this is not so much creepy as curious. and nothing the children have to say of do could harm or scam them. It is fantasy, treated realistically: taken from John Wyndham's The Midwsch Cuckoos, it is about a real and fairly solid village into which a dozen extraordinary beings are born on the same day, conceived with miraculous lack of human inter- vention during a few hours when the entire place has a blackout. and everyone drops in his tracks. Then the extraordinary babies grow larger, more brilliant, more united. more menacing, into a troop of beautiful nine-year-olds with eyes than can stare a man into momentary madness; and again there is realism in the outside world's idea of the way they ought to be dealt with (top-level conferences, scientists, the army, world news, etc.) And if it doesn't quite come off, if belief remains pretty unsuspended, the main reason isn't I think, the extent of the fantasy but the inadequacy of the realism. For instance, in the village blackout the detail is weak: a woman drops by the ironing board and you seelt starting to scorch; several hours later she wakes and you see her dashing water over the hot iron with a mild sizzle. Several hours of an uncontrolled iron would have the house burnt to ashes. Or again, why wasn't anyone in a whole village cooking round about lunch-time? Wouldn't there have been kettles and saucepans reduced to puddles of aluminium and tin, after several hours over unchecked gas or electric rings? The dis- asters are all just picturesque things, like over- flowing taps; just as the main couple, George Sanders and Barbara Shelley, are a film couple in a film house, not people in a home. Only the children, way beyond reality or realism, are just right. All they have to do is be on the screen at all, icicle creatures, impossibly clean, remote and self-contained, with gold silk for hair and large, strange eyes we gradually discover are menacing. The only thing I believed in throughout the film was their serene and quite unbelievable aloof- ness; and the brilliance suggested, not in any w.se-guy remarks, but in their faces and bones and distinction. Really it says a lot for a film with such an almost unbearable subject that its mon sters are marvels rather than horrors.