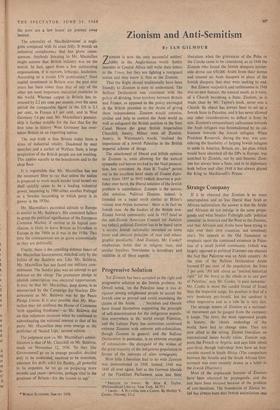 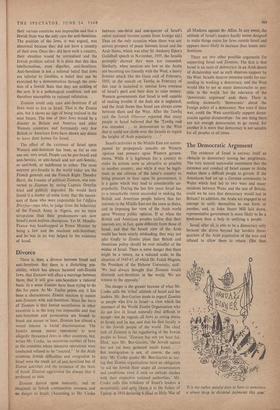 If it be objected that Zionism is no more unscrupulous and no less liberal than Arab or African nationalism, the answer is that the Arabs and Africans do not indulge in the same propa- ganda and what Senator Fulbright calls 'political coercion' in America and the West as the Zionists, and that Africans and Arabs have been trying to take over their own countries, not somebody else's. No appeals to the Old Testament or emphasis upon the continued existence in Pales- tine of a small Jewish community (which was largely opposed to political Zionism) can obscure the fact that Palestine was an Arab country. At the time of the Balfour Declaration Arabs formed 87 per cent. of the population, the Jews 7 per cent. 'All talk about an "ancient historical right" [of the Jews] to the whole or to any part of Palestine,' says Mr. Cooke, 'is pure nonsense.' Mr. Cooke is more the candid friend of Israel than the impartial judge; his position is that of a very moderate pro-Israeli, but his candour is often impressive and as a rule he is very fair.

The strange nature of Zionism as a national- ist movement can be gauged from the company _ it keeps. The Jews, the most oppressed people in history, the classic underdogs of the world, have had to change sides. They are now allied to the strong. Zionist liberalism on international issues hardly exists. Zionism sup- ports the French in Algeria, and says little about apartheid, though individual Jews have an hon- ourable record in South Africa. (The comparison between the Israelis and the South African Gov- ernment was even recently drawn in a letter to the Jewish Observer.) Most of the unpleasant features of Zionism have been obscured by propaganda, and the rest have been excused because of the problem of anti-Semitism. The foundation of Zionist be- lief has always been that Jewish assimilation into their various countries was impossible and that a Jewish State was the only cure for anti-Semitism. The position of the Jews, it was argued, was abnormal because they did not have a country of their own. Once they did have such a country, their situation would be normalised and the Jewish problem solved It is plain that this idea intellectualises, even dignifies, anti-Semitism. Anti-Semitism is not a rational belief that Jews are inferior to Gentiles, a belief that can be exorcised by a demonstration through the crea- tion of a Jewish State that they are nothing of the sort. It is a pathological condition, and not therefore susceptible to rational refutation.

Zionism could only cure anti-Semitism if all Jews went to live in Israel. That is the Zionist aim, but it shows no sign of being realised in the near future. The loss of their Jews would be a disaster to Britain and America and other Western countries, and fortunately very few British or American Jews have shown any desire to leave their homes for Israel.

The effect of the existence of Israel upon Western anti-Semitism has been, so far as one can see, very small. People can be pro-Israeli and anti-Semitic, or anti-Israeli and not anti-Semitic, or anti-both, or indifferent to either. The most extreme pro-Israelis in the world today are the French generals and the French Right. Theodor Herzl, the founder of political Zionism, was con- verted to Zionism by seeing Captain Dreyfus tried and publicly degraded. He would have found it a matter of some irony that the succes- sors of those who were responsible for l'Aflaire Dreyfres-.—men who, to judge from the behaviour of the French Army in Algeria, are no more scrupulous than their predecessors—are now Israel's most zealous champions. Yet M. Mendes- France was handicapped as Prime Minister by being a Jew and the resultant anti-Semitism; and he was in no way helped by the existence of Israel.