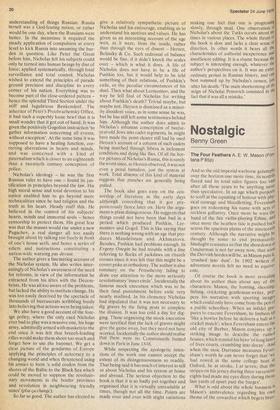 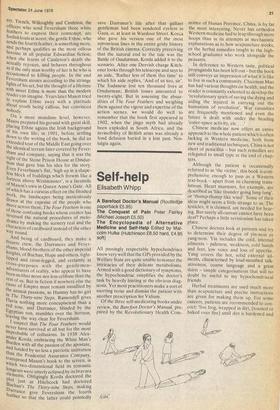 And so the old imperial warhorse galumPhs over the horizon one more time, its nostril5 flared and its total sales figures too vast after all these years to be anything more than speculative. In an age which purports to scoff at the equating of honour with phY' sical courage and bloodletting, Fevershar° goes on redeeming his name with acts of reckless gallantry. Once more he wins the hand of the fair violin-playing Ethne, and once more the heathen tide is pushed baelc across the spacious plains of the nineteenth century. Although the narrative might be thought by some to end prematurelY, hindsight reassures us that the showdown at Omdurman is not far away now, that soon the Dervish hordes will be, as Mason puts it, 'crushed into dust'. In 1902 writers of adventure novels felt no need to equivo' cate.

Of course the book is more revealing about its author than about any of the characters. Mason, the hunting, shooting, fishing, cricketing gentleman-writer, per pers his narrative with sporting images which could only have come from the pen of a public schoolboy. When an infidel prepares 1.0 execute Feversham, he limbers t11) 'like a bowler before he delivers a ball at 0 cricket match'; when Feversham enters the old city of Berber, Mason conjures UP striking image to describe the ruined houses, which remind his hero 'of long lane! of fives courts, crumbling into decay'. And when the stoic Durrance measures Fever' sham's worth he can never forget that 'WC had rowed in the same college boat at Oxford, he at stroke, I at seven; that the stripes on his jersey during three successive eights had made my eyes dizzy during those last yards of spurt past the barges'. What is odd about the whole business is Mason's ambivalence regarding his own theme of the cowardice which begets bray'

erY. Trench, Willoughby and Castleton, the officers who send Feversham three white feathers to express their comtempt, are foolish louts at worst; the gentle Ethne, who sends the fourth feather, is something more, and perhaps qualifies as the most odious heroine in all popular Edwardian fiction; When she learns of Castleton's death she actually rejoices, and behaves throughout as if the only man worthy of her is he who is accustomed to killing people. In the end Feversham atones according to the strange lights of his set, but the thought of a lifetime With sweet Ethne is more than the modern reader can imagine. Years later Mason tried to explain Ethne away with a platitude about youth being callous, but convinced nobody,

On a more mundane level, however, Mason prepared his ground with great skill, Placing Ethne agains the Irish background of his own life; in 1901, before settling down to the writing of the book, he did an extended tour of the Middle East going over the identical terrain later covered by Feversham and company, saying that it was the Sight of the Stone Prison House at Omdurman that gave him. his idea for the story. Even Feverhsam's flat, 'high up in a shapeless block of buildings which frowns like a fortress above Westminster', is a facsimile of Mason's own in Queen Anne's Gate. All of which has a curious effect on the finished Work, the landscapes being meticulously drawn at the expense of the people who Move across them; The Four Feathers is one of those confusing books whose creator has reversed the natural procedures of melodrama by making the scenery real and the Characters of cardboard instead of the other way round.

And being of cardboard, they make a bizarre crew, the Durrances and Fevershams, blood-brothers of the other imperial knights of Buchan, Hope and others, tight'IPPed and cross-legged, and certainly at cross-purposes with the gentlemenadventurers of reality, who appear to have been neither more nor less celibate than the rest of us. But in fiction if nowhere else the cause of Empire must remain unsullied by r.be animal passions, so Hannay has no girl In The Thirty-nine Steps, Rassendyll gives Kayla nothing more concupiscient than a red rose, and Durrance, blinded by the

leaving sun, stumbles over the horizon, leaving the way clear for Feversham.

I suspect that The Four Feathers would never have survived at all but for the most Improbable of collusions. In 108 Alexander Korda, embracing the White Man's Burden with all the passion of the apostate, and funded by no less a patriotic institution than the Prudential Assurance Company, transposed Mason's book to the screen, in W. hich two-dimensional field its romantic longeurs were utterly eclipsed by its bravura elements. Obligingly Korda doctored the Plot just as Hitchcock had doctored Buchan's The Thirty-nine Steps, making Durrance give Feversham the fourth feather so that the latter could pointedly save Durrance's life after that gallant gentleman had been rendered eyeless in Gaza, cm at least in Wardour Street. Koru'a also gave his version one of the most uproarious lines in the entire grisly history of the British cinema. Correctly preceiving that the natural end to the tale was the Battle of Omdurman, Korda added it to the scenario. After one Dervish charge Kitchener looks through his telescope and says to an aide, 'Rather less of them this time' to which his aide replies, 'And of us too, sir'. The Sudanese lost ten thousand lives at Omdurman; British losses amounted to twenty-eight. But in assessing the absurdities of The Four Feathers and weighing them against the vigour and expertise of the action scenes, we would do well to remember that the book first appeared in 1902, when the jingo myth had already been exploded in South Africa, and the invincibility of British arms was already a fond delusion buried in a lost past. Nostalgia again.