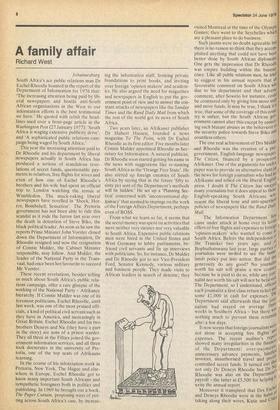 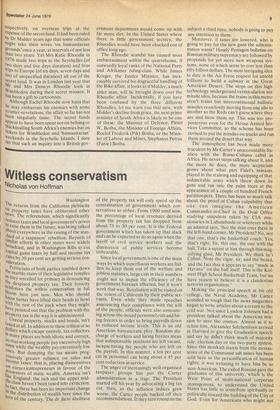 Johannesburg South Africa's ace public relations man Dr Eschel Rhoodie boasted in the report of the Department of Information for 1976 that: 'The increasing attention being paid by liberal newspapers and hostile anti-South African organisations in the West to our information efforts is the best testimonial we have.' He quoted with relish the headlines used over a front-page article in the Washington Post (27 January 1977): 'South Africa is waging extensive publicity drive', and 'A sophisticated public relations campaign being waged by South Africa.'

This year the increasing attention paid to Dr Rhoodie and his department by liberal newspapers actually in South Africa has produced a serious of scandalous revelations of secret funds, questionable payments to relatives, free flights for wives and even of how one of. Eschel Rhoodie's brothers and his wife had spent an official trip to London watching the tennis at Wimbledon. The muck-raking liberal newspapers have revelled in 'Shock, Horror, Bombshell, Sensation'. The Pretoria government has not been able to ride this scandal as it rode the furore last year over the death in detention of Steve Biko, the black political leader. As soon as he saw the reports Prime Minister John Vorster closed down the Department of Information, Dr Rhoodie resigned and now the resignation of Connie Mulder, the Cabinet Minister responsible, may follow. And Mulder, the leader of the National Party in the Transvaal, had once been hot favourite to succeed Mr Vorster.

These recent revelations, besides 'telling us much about South Africa's public relations campaign, offer a rare glimpse of the working of the National Party — Afrikaner hierarchy. If Connie Mulder was one of its foremost politicians, Eschel Rhoodie, until last week, was one of the most praised officials, a kind of political civil servant such as they have in America, and increasingly in Great Britain, Eschel Rhoodie and his two brothers Deneys and Nic (they have a part in the story) are sons of a prison warder. They all three in the Fifties joined the government information services, and all three took doctorates in the university of Pretoria, one of the top seats of Afrikaans learning. .

In the course of his information work in Pretoria, New York, The Hague and elsewhere in Europe, Eschel Rhoodie got to know many important South Africans and sympathetic foreigners both in politics and publishing. In 1969 he brought out a book, The Paper Curtain, proposing ways of putting across South Africa's case, by increas

ing the information staff, forming private foundations to print books, and inviting over foreign 'opinion makers' and academics. He also argued the need for magazines and newspapers in English to put the government point of view and to answer the constant attacks of newspapers like the Sunday Times and the Rand Daily Mail from which the rest of the world got its news of South Africa.

Two years later, an Afrikaner publisher Dr Hubert Hussen, founded a news magazine To The Point, with Dr Eschel Rhoodie as its first editor. Five months later Connie Mulder appointed Rhoodie as Secretary for Information. A natural publicist, Dr Rhoodie soon started getting his name in the news with suggestions like re-naming South Africa as the 'Orange Free State'. He also stirred up foreign enemies of South Africa by saying that in the future 'fifty to sixty per sent of the Department's methods will be hidden.' He set up a 'Planning Section' concerned with 'unconventional diplomacy' that seemed to impinge on the work of the Foreign Affairs Department, perhaps even of BOSS.

From what we learn so far, it seems that the secret money was spent on activities that were neither very sinister nor very valuable to South Africa. Expensive public relations men were hired in the United States and West Germany to lobby parliaments, befriend civil servants and fix up interviews with politicians. So, for instance, Dr Mulder and Dr Rhoodie got to see Vice-President Ford, Senator Kennedy, various military and business people. They made visits to African leaders in search of detente; they visited Montreal at the time of the OlymPie Games; they went to the Seychelles which are a pleasant place to do business. Such jaunts were no doubt agreeable hut

there is no reason to think that they acconv plished anything that could not have beet better done by South African diplomats. One gets the impression that Dr Rhoodie was empire building within the bureau: cracy. Like all public relations men, he trice to suggest in his annual reports that all favourable comment on South Africa was due to his department and that adverse comment, after Soweto for instance, cotq be countered only by giving him more stall and more funds. It may be true, I think it i5 true, that some of the coverage of this cowl' try is unfair, but the South African goy' ernment cannot alter this except by remov' ing such blatant abuses as the behaviour of the security police towards Steve Biko any countless others.

The one real achievement of Drs Mulder

and Rhoodie was the creation of a prtr government, English-language newspaper' The Citizen, financed by a prosperous Afrikaner. One of the arguments for 50ch8 paper was to provide an alternative slant 0t the news for foreign journalists who had 0° Afrikaans and relied on the liberal English, press. I doubt if The Citizen has swaYeu many journalists but it does appeal to those English-speaking South Africans Wil°d resent the liberal tone and anti-aparthe'

policies of newspapers like the Rand DO Mail. he Information Department firskt came under attack at home over its lavisy offers of free flights and expenses to foreign , 'opinion-makers' who wanted to come I South Africa. Before the independence Of I the Transkei two years ago, and ci I Bophuthatswana last year, large parties °

journalists were invited to see the hoine, ( lands policy put into action. But did generosity do any good? No journal's I worth his salt will praise a new come because he is paid to do so, while any .I0°Ar: nalist not worth his salt will not be believed The Department, so I understand, offered each journalist a first-class return ticket, arlke some £1,000 in cash for expenses. 11, Department said afterwards that the jou'; I nalists had stayed on average Ores weeks in Southern Africa — but there via, I nothing much to prevent them returnill° I after a few days. It now seems that foreign journalists WI ( not alone in accepting free flights also I expenses. The recent auditor's rePes showed many irregularities in the financs, of the Department: over-paymentd unnecessary advance payments, falsifiiely invoices, unauthorised travel and Por),:at controlled secret funds. It turned out r,juic not only Dr Deneys Rhoodie but Dr l'e$ Rhoodie was also on the DepartMento payroll — the latter at £5,500 for helping write the annual report. het Moreover it transpired that Drs Esc frif and Deneys Rhoodie were in the habit Ica taking along their wives, Katie and Cis respectively, on overseas trips at the exPense of the secret fund. It had been ruled by Dr Mulder years ago that some officials might take their wives 'on humanitarian grounds' once a year, at intervals of not less than two years. Yet Mrs Katie Rhoodie in 1976 made two trips to the Seychelles (of tWo days and five days duration) and four trips to Europe (of six days, seven days and two of unspecified duration) all out of the secret fund. It was in London last year that Mr and Mrs Deneys Rhoodie took in Wimbledon during their secret mission. It has been a gift to cartoonists.

Although Eschel Rhoodie now hints that he may embarrass his enemies with some eounter-revelations, the affair so far has not been singularly tame. The secret funds aPPear to have been spent not on bribing or hlackmailing South Africa's enemies but on tickets for Wimbledon and 'humanitarian' Weekends in the Seychelle Islands. I dare saY that such an inquiry into a British gov t.\ ernment department would come up with far more dirt. In the United States where there is little government secrecy, the Rhoodies would have been chucked out of office long ago.

The Rhoodie scandal has caused most embarrassment within the quarrelsome, if outwardly loyal ranks of the National Party and Afrikaner ruling-class. While James Kruger, the Justice Minister, has inexcusably survived his disgraceful handling of the Biko affair, it looks as if Mulder, a much abler man, will be brought down over the Rhoodie affair. Incidentally, if you have been confused by the three different Rhoodies, let me warn you that now, with Mulder's decline from grace, the next prime minister of South Africa is likely to be one of these: the Minister of Defence, Pieter W. Botha, the Minister of Foreign Affairs, Roelof Frederik (Pik) Botha, or the Minister of Labour and Mines, Stephanus Petrus (Fanie) Botha.