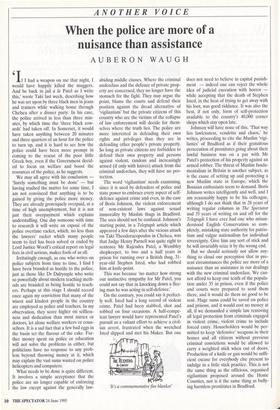 When the police are more of a nuisance than assistance

If I had a weapon on me that night, I would have happily killed the muggers. And be back in jail a la Patel as I write this,' wrote Taki last week, describing how he was set upon by three black men in jeans and trainers while walking home through Chelsea after a dinner party. In his case, the police arrived in less than three min- utes, by which time the 'three black cow- ards' had taken off. In Somerset, it would have taken anything between 20 minutes and three quarters of an hour for the police to turn up, and it is hard to see how the police could have been more prompt in coming to the rescue of the poor little Greek boy, even if the Government decid- ed to focus on welfare and boost the resources of the police, as he suggests.

We may all agree with his conclusion 'Surely something must be done' — but having studied the matter for some time, I am not convinced that anything is to be gained by giving the police more money. They are already grotesquely overpaid, at a time of high unemployment, but it is not just their overpayment which explains understaffing. One day someone with time to research it will write an exposé of the police overtime racket, which, no less than the lawyers' racket which many people seem to feel has been solved or ended by Lord Justice Woolf's critical report on legal fees in civil actions, makes fools of us all.

Irritatingly enough, as one who writes on police subjects from time to time, I find I have been branded as hostile to the police, just as those like Dr Dalrymple who write so powerfully about modern teaching meth- ods are branded as being hostile to teach- ers. Perhaps at this stage I should record once again my conviction that many of the wisest and kindest people in the country are employed as police and teachers. In my observation, they score higher on selfless- ness and dedication than most nurses or doctors, let alone welfare workers or coun- sellors. It is a sad fact that a few bad eggs in the basin set the flavour of the cake. Fur- ther money spent on police or education will not solve the problems in either, but politicians have no response to any prob- lem beyond throwing money at it, which may explain the vast sums wasted on police helicopters and computers.

What needs to be done is quite different. It involves a simple acceptance that the police are no longer capable of enforcing the law except against the generally law- abiding middle classes. Where the criminal underclass and the defence of private prop- erty are concerned, they no longer have the stomach for the fight. They may argue the point, blame the courts and defend their position against the dread alternative of `vigilantism' but the private citizens of this country who are the victims of the collapse of law enforcement will decide for them- selves where the truth lies. The police are more interested in defending their own rights and privileges than they are in defending other people's private property. So long as private citizens are forbidden to defend their own property and persons against violent, random and increasingly armed (if only with knives) attack from the criminal underclass, they will have no pro- tection.

The word 'vigilantism' needs examining, since it is used by defenders of police and state power to embrace every aspect of self- defence against crime and even, in the case of Boris Johnson, the violent enforcement of non-existent laws against sexual immorality by Muslim thugs in Bradford. The uses should not be confused. Johnson's starting point, in a Telegraph article which appeared a few days after the vicious attack on Taki Theodoracopoulos in Chelsea, was that Judge Henry Parnell was quite right to sentence Mr Rajendra Patel, a Wembley shopkeeper, to two and a half years in prison for running over a British thug, 31- year-old Stephen Isted, who had robbed him at knife-point.

This was because 'no matter how strong our instinctive sympathy for Mr Patel, you could not say that in knocking down a flee- ing man he was acting in self-defence.'

On the contrary, you could say it perfect- ly well. Isted had a long record of violent crime. Patel had been stabbed, shot and robbed on four occasions. A half-compe- tent lawyer would have represented Patel's pursuit as a valiant effort to achieve a civil- ian arrest, frustrated when the wretched Isted slipped and met his Maker. But one `It's a commemorative fire blanket' does not need to believe in capital punish- ment — indeed one can reject the whole idea of judicial execution with horror while accepting that the death of Stephen Isted, in the heat of trying to get away with his loot, was good riddance. It was also the best, if not only, form of self-protection available to the country's 40,000 corner shops which stay open late.

Johnson will have none of this. 'That way lies lawlessness, vendetta and chaos,' he writes, proceeding to cite the Muslim 'vigi- lantes' of Bradford as if their gratuitous persecution of prostitutes going about their lawful business was on a par with Mr Patel's protection of his property against an armed robber. The threat of Muslim funda- mentalism in Britain is another subject, as is the cause of setting up and protecting a new Muslim state in Europe, which the Bosnian enthusiasts seem to demand. Boris Johnson writes intelligently and well, and I am reasonably happy to be his colleague, although I do not think that in 28 years of writing regular columns in The Spectator and 35 years of writing on and off for the Telegraph I have ever had one who misun- derstood English Conservatism so com- pletely, mistaking state authority for patrio- tism and vulgar nationalism for individual sovereignty. Give him any sort of stick and he will invariably seize it by the wrong end.

But we should seriously not allow any- thing to cloud our perception that in pre- sent circumstances the police are more of a nuisance than an assistance in our dealings with the new criminal underclass. We can- not afford to keep one tenth of the popula- tion under 35 in prison, even if the police and courts were prepared to send them there, and it would do them no good to be sent. Huge sums could be saved on police and prisons, and it would cost no money at all, if we demanded a simple law removing all legal protection from criminals engaged in violent crime, violent crime to include forced entry. Householders would be per- mitted to keep 'defensive' weapons in their homes and all citizens without previous criminal convictions would be allowed to carry a weighted stick when out of doors. Production of a knife or gun would be suffi- cient excuse for everybody else present to indulge in a little stick practice. This is not the same thing as the officious, organised vigilantism proposed around the Home Counties, nor is it the same thing as bully- ing harmless prostitutes in Bradford.