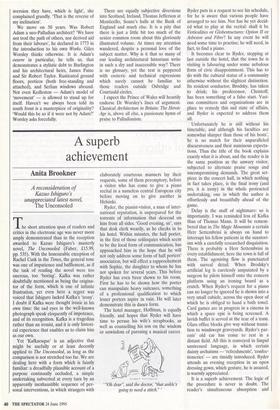 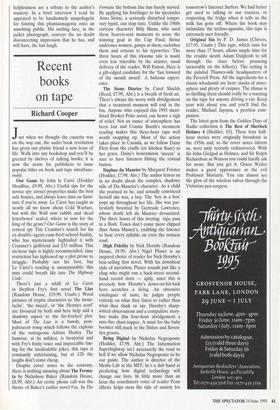 A reconsideration of Kazuo Ishiguro's unappreciated latest novel, The Unconsoled

The short attention span of readers and critics in the electronic age was never more amply demonstrated than in the reception awarded to Kazuo Ishiguro's masterly novel, The Unconsoled (Faber, £15.99, pp. 535). With the honourable exception of Rachel Cusk in the Times, the general tone was one of impatience and bafflement, as if the task of reading the novel were too onerous, too 'boring'. Kafka was rather doubtfully mentioned as being the origina- tor of the form, which is one of infinite frustration, yet even here a regret was voiced that Ishiguro lacked Kafka's 'irony'. I doubt if Kafka were thought ironic in his own time: the sad eyes in the well-known photograph speak eloquently of impotence, and of its recognition. Kafka is a tragedian rather than an ironist, and it is only histori- cal experience that enables us to claim him as our own.

Yet 'Kafkaesque' is an adjective that might be usefully or at least decently applied to The Unconsoled, as long as the comparison is not stretched too far. We are dealing here with a form which is faintly familiar: a dreadfully plausible account of a purpose continually occluded, a simple undertaking subverted at every turn by an apparently inexhaustible sequence of per- sonal interventions, in which strangers with elaborately courteous manners lay their requests, some of them peremptory, before a visitor who has come to give a piano recital in a nameless central European city before moving on to give another in Helsinki.

Ryder, the pianist-visitor, a man of inter- national reputation, is unprepared for the torrents of information that descend on him from all sides. 'Good evening, sir', says that desk clerk wearily, as he checks in to his hotel. Within minutes, the hall porter, in the first of those soliloquies which seem to be the local form of communication, has approached him in the hope that he will not only address some form of hall porters' association, but will effect a rapprochement with Sophie, the daughter to whom he has not spoken for several years. This before Ryder has even been shown to his room. First he has to be shown how the porter can manipulate heavy suitcases, something of a professional qualification to which lesser porters aspire in vain. He will later demonstrate this in dance form.

The hotel manager, Hoffman, is equally friendly, and hopes that Ryder will have time to peruse his wife's scrapbooks, as well as counselling his son on the wisdom or unwisdom of pursuing a musical career.

"Oh dear", said the doctor, "that ankle's going to need a stitch." ' Ryder puts in a request to see his schedule, for he is aware that various people have arranged to see him. Nor has he yet decid- ed what to play at the recital: shall it be Verticalities or Globestructures: Option II or Asbestos and Fibre? In any event he will need some time to practise; he will need, in fact, to find a piano.

It becomes clear to Ryder, stepping at last outside the hotel, that the town he is visiting is labouring under some nebulous form of civic disappointment. This has to do with the cultural status of a community otherwise without the slightest distinction. Its resident conductor, Brodsky, has taken to drink; his predecessor, Christoff, has been something of a false start. Vari- ous committees and organisations are in place to remedy this sad state of affairs, and Ryder is expected to address them all.

Unfortunately he is still without his timetable, and although his faculties are somewhat sharper than those of his hosts', he is no match for their unparalleled discursiveness and their numinous expecta- tions. Thus the title of the book explains exactly what it is about, and the reader is in the same position as the unwary visitor, subjected to alternate praise songs and uncompromising demands. The great set- piece in the concert hall, in which nothing in fact takes place, is the final irony (and yes, it is irony) in the whole protracted undertaking, one in which the author is effortlessly and beautifully ahead of the game.

Delay is the stuff of nightmare: so is importunity. I was reminded less of Kafka than of Thomas Mann. It will be remem- bered that in The Magic Mountain a certain Herr Settembrini is always on hand to interrupt his fellow patients in the sanatori- um with a carefully researched disquisition. There is probably a Herr Settembrini in every establishment; here the town is full of them. The agonising flow is punctuated with surreal detail. When Brodsky's artificial leg is carelessly amputated by a surgeon he pilots himself onto the concern platform using an ironing board as a crutch. When Ryder's request for a piano can no longer be ignored he is shown into a very small cubicle, across the open door of which he is obliged to hand a bath towel. Card games are in progress in a cinema in which a space epic is being screened. A lavish buffet is served at the rear of a tram. Glass office blocks give way without transi- tion to windswept graveyards. Ryder's par- ents' old car has come to rest in a distant field. All this is conveyed in limpid unstressed language, in which certain dainty archaisms — 'refreshments', 'confec- tioneries' — are timidly introduced. Ryder attends an evening reception in an open dressing gown, which gesture, he is assured, is warmly appreciated.

It is a superb achievement. The logic of the procedure is never in doubt. The reader's simultaneous absorption and helplessness are a tribute to the author's mastery. In a brief interview I read he appeared to be handsomely unapologetic for foisting this phantasmagoria onto an unwitting public. His smiling face, in the jacket photograph, conveys the no doubt disconcerting impression that he has, and will have, the last laugh.