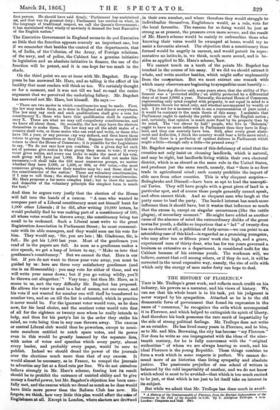 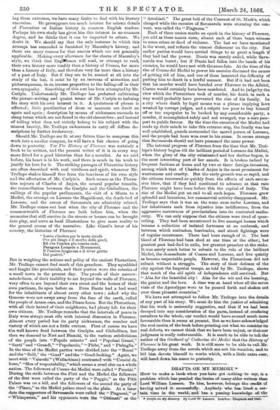 THE HISTORY OF FLORENCE.* Tuts is Mr. Trollope's great work,

and reflects much credit on his industry, his powers as a narrator, and his views of history. We can see that his whole heart is in his task, yet his judgment is never warped by his sympathies. Attached as he is to the old. democratic form of government that found its expression in the name of " commune," he recognizes the evils which accompanied it in Florence, and which helped to extinguish its spirit of liberty. And therefore his book possesses the rare merit of impartiality by the side of strong political feelings. Mr. Trollope does not write as an outsider. He has lived many years in Florence, and to him, as to Mr. and Mrs. Browning, the city has become " my Florence." Nor does he write as one impregnated with the ideas of the nine- teenth century, for he is fully conversant with the "original authorities " of whom we are always hearing so much, and his ideal Florence is the young Republic. These things combine to form a work which in some respects is perfect. We cannot de- mand more of an historian than living sympathy and absolute justice. The passionate prejudice of one school of writers is balanced by the cold impartiality of another, and we do not know which school is most to be avoided—that which is too much excited to be just, or that which is too just to let itself take an interest in its subject.

But while we admit that Mr. Trollope has done much in avoid-

• A History of the Commonwealth of Florence, from the Earliest Independence of the Commune to the Fall of the Republic in 1591. By T. Adolph.. Trollop.. 4 v..,* Loudon: Chapman and Hall. 1805.

ing these extremes, we have many faults to find with his literary execution. He presupposes too much interest for minute details of Florentine or Italian, history in common English readers.

Perhaps his own study has given him this interest in no common degree, and he thinks that it can be imparted to others. We doubt it. We should say that the only instance in which this attempt has succeeded is furnished by Macaulay's history, and there are many reasons for that success which are not generally applicable. Making every allowance for the charm of Macaulay's style, we think that EnglIllnuen will read, or attempt to read., their own history more readily, than a history of France, far more than a history of Italy, and therefore very-far more than a history of a part of Italy. But if they are to be coaxed at all into the study of the last, it must be by an increase of attraction and picturesqueness, in an inverse- proportion to the falling-off in their own sympathy. Something of this sort has been attempted by Mr.

his story with his own interest, in it. A quaintness of phrase is affected; little peculiarities of dress or manners are dwelt on

again and again ; description by means of nicknames succeeds to slang terms which are not found in the old chroniclers ; and instead of telling what doze not strictly belong to his subject with the utmost brevity, Mr. Trollope endeavours to carry off diffuse de- scriptions by further irrelevancy.

Should Mr. Trollope see fit at any future time to compress this work into a smaller compass, he will have a fair chance of going -down to posterity. For The History of Florence was certainly a book to be written, and the present writer of it is in every way snore fitted for a good. historian than for a novelist. As we said before, his heart is in his work, and there is much in his work to justify his love for it. The striking passages of Florentine history are often described with real vividness and spirit, whenever Mr. Trollope shakes himself free from the heaviness of his own style

and the affectation of Mr. Carlyle's. Such scenes as the Floren- tine sojourn of Charles of Anjou, the several popular tumults, the reconciliation between the Guelphs and the Ghibellines, the callings of the popular parliaments, the visit of a Sforza to a Medici, the attempt on Lorenzo the Magnificent, the death-bed of Lorenzo, and the career of Savonarola are admirably related.

Mr. Trollope comes out best when the city of Florence and the commonwealth. of Florence are both before him, when the • memories that still survive in the streets or houses can be brought into play, and serve as local illustrations to give more reality to the general course of the narrative. Like Giusti's lover of his -country, the historian of Florence

But in weighing the actions and policy of the ancient Florentines, Trollope cannot find much of this grandeur. They squabbled and fought like provincials, and their parties were the coteries of a small town in the present day. The proofs of their narrow- mindedness, of their inability to see beyond the walls of Florence, very often to see beyond their own street and the houses of their own partizans, lie open before us. Even Dante had a bad word for the inhabitants of almost every other town ; asked why the Genoese were not swept away from the face of the earth, called the people of Arezzo cars, and the Pisans foxes. But the Florentines, with all their hatred of their neighbours, had plenty left for their -own citizens. Mr. Trollope remarks that the intervals of peace in

Italy were always most rife with internal dissension in Florence. Almost every period has- its party nicknames, the number and variety of which are not a little curious. First of course we have the well known fend between the Guelphs and Ghibellines, but then we descend to Neri and Bianchi, to the various subdivisions of the people into "Popolo minuto " and "Popolani Grassi," "Sand" and "Grandi," "Popolaccio," "Plebe," and " Plebaglia."

In the time of Medici parties were divided into the " Buoni " and the "Belli," the "Good" and the " Good-looking." Again, we meet with " Valacchi".(Wallachians) contrasted with "Uomini bene," "Men of respectability," which seems a cruel slur on a whole

nation. The followers of Cosmo dei Medici were called " Puccini." During the strife between the Pitti and the Medici the followers

of the first were called the party- of the " Poggio," as the Pitti Palace was on a hill, and the followers of the second the party of, the "Piano," as the Medici palace stood on the plain. At a later date the supporters of Savonarola were-called the " Piagnoni," or 4‘ Whimperers," and his opponents were the " Ottimati" or. the

" Arrabiati." The great bell of the Convent of St. Mark's, which clanged while the enemies of Savonarola were storming the con- vent, was called the " Piagnona."

Each of these names marks an epoch in the history of Florence, yet odd as these names seem, almost each of them bears witness to some crime or deed of violence. The last we have mentioned is the worst, and reflects the utmost dishonour on the city. But earlier parties would have carried things to as great a leugth if they had had the power. Dante was merely exiled, while Savo- narola was burnt; but if Dante had fallen into the hands of his enemies, he would have met with thesamelate. At the time of the rise of Cosmo dei Medici to power his enemies discussed the means of getting rid, of him, and one of them lamented the difficulty of putting him to death in a lawful manner.. But if it had not been that his murder would have handed over Florence to the Albizzi, Cosmo would certainly have been murdered. And to judge by the view which the Florentines took of murder, his death in such a way would probably have prevented the rise-. of his family. In a city where death by legal means was a phrase implying laws wrested by corrupt judges, and a culprit too poor to buy himself off or too unpopular to be backed by any considerable party, a murder, if accomplished safely and not avenged, was a sure pass- port to public favour. By the time the enemies of the Medici had made up their minds to take this extreme step, the family was too well established, guards surrounded the saered person of Lorenzo, and the people had been won over to his cause. It seems strange that Savonarola should not have possessed the same power.

The internal progress of Florence from the time that Mr. Trol- lope's history begins till the brilliant period of Lorenzo dei

when. the glory of the city culminated and her decline began, is the most interesting part of her annals. It is broken indeed by frequent factions at home and by two or three foreign, invasions, among which that of Charles. of Anjou is the most prominent for wantonness and cruelty. But the early growth was so rapid, and the citizens recovered so quickly from the effects of each succes- sive blow, that if they had continued to advance at, that rate Florence might have been before this the capital of Italy: The rise of the Medici put an end to all such hopes. Florence, grew splendid and luxurious, her commercial activity disappeared. Mr. Trollope says that it was on the wane even under Lorenzo, and her inhabitants sank from injustice into indifference, from the aggressive narrowness of provincialism into its contented medio- crity. We can only suppose that the citizens were tired of quar- relling. They had been accustomed to live amongst houses which became a collection of isolated fortresses at an outbreak, and between which ambushes, barricades, and street fightings were of regular occurrence. There had been enough of it. The best blood of Florence had been shed at one time or the other,;, her greatest poet had died in exile, her greatest preacher at the stake. It was surely much better to submit to the rule of the brilliant Medici, the descendants of Cosmo and Lorenzo, and live quietly as became respectable people. However, the Florentines did not submit without a struggle. The story of their defence of the city against the Imperial troops, as told by Mr. Trollope, shows that much of the old spirit of independence still survived. But " Alas for the beautiful city! Alas for the wit and the learning, the genius and the love. A time was at hand when all the• seven vials of the Apocalypse were to be poured forth and shaken out over those pleasant countries."

We have not attempted to follow Mr. Trollope into the details of any part of his story. We must do him the justice of admitting that his work is eminently suggestive, and that if we had been decoyed into any consideration of the parts, instead of confining ourselves to the whole, our verdict would have seemed much more favourable than it seems at present. But as we have acknowledged the real merits of the book before pointing out what we consider its real defects, we cannot think that we have been unjust, or thatonr judgment is really unfavourable. It is much to be able to tell the author of the Girlhood of Catherine dei Medici thatthe History of Florence is his great work. It is still more to be able to call. Mr. Trollope away from the novels which are not his vocation, and to bid him_ devote himself- to works which, with a little extra care, will hand down his. name to posterity.