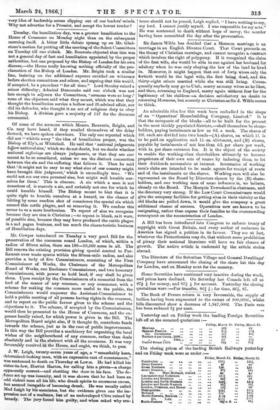 Mr. Cowper introduced on Tuesday a very good Bill for

the preservation of the commons round London, of whieh' within, a .radius of fifteen miles, there are 180-10,500 acres in all. The Bill renews the existing provision giving special control to Par- liament over waste spaces within the fifteen-mile radius, and also provides a body of five Commissioners, consisting of the First -Commissioner of Works, the Chairman of the Metropolitan Board of Works, one Enclosure Commissioner, and two honorary Commissioners, with power to hold land, if any shall be given them. Upon receipt by the Commissioners of a memorial from the ford of the manor of any common, or any commoner, with a scheme for making the common more useful to the public, the Commissioners would empower the Assistant-Commissioner to hold a public meeting of all persons having rights in the common, and to report on the public favour given to the scheme and the .objections to it. The scheme, if accepted by the Commissioners, would then be presented to the House of Commons, and the ex- peruses locally raised, for which power is given in the Bill. The Metropolitan Board might also, if it thought fit, contribute funds towards the scheme, just as in the case of public improvements. In this way the Bill provides a machinery for organizing the local wishes of the neighbourhood of any common, rather than deals -absolutely and in the abstract with all the commons. It was very favourably receiveclizt the House, and ought, we think, to pass.