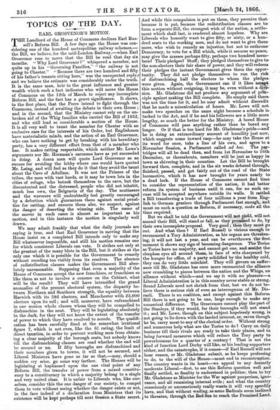 TOPICS OF THE D.Y.

THE Landlord of the House of Commons declines Earl Rus- sell's Reform Bill. A few days ago the House was con- sidering one of the hundred metropolitan railway schemes,— the Bill, we believe, for the mid-London Railway,—when Earl Grosvenor rose to move that the Bill be read that day six months. " Why Lord Grosvenor ?" whispered a member, not quite up in his " Governing Families," " the railway is not going to Chester." " Because there are two hundred and fifty of his father's tenants sitting here," was the unexpected reply,, and we believe the estimate was considerably under the truth. It is the same man, heir to the great influence and greater wealth which such a fact indicates who will move the House of Commons on the 12th of March to reject any incomplete Reform Bill, and the fact has a grave significance. It shows, in the first place, that the Peers intend to fight through the Commons, instead of awaiting the debate in their own House ; and in the second, that the Ministry cannot rely on the un- broken aid of the Whig families who carried the Bill of 1832, and who still lead so considerable a section of the House. It is all very well to taunt the member for Chester with an exclusive care for the interests of his Order, but Englishmen have materialistic minds, and the action of an Earl Grosvenor, who can have nothing to get by breaking with his hereditary party, has a very different effect from that of a member who has. It makes ratting respectable, which neither Mr. Lowe's arguments nor Mr. Horsman's sarcasms have as yet succeeded in doing. A dozen men will quote Lord Grosvenor as an excuse for avoiding the lobby where one would have quoted Mr. Laing, and will feel as they do it that they avoid the taunt about the Cave of Adullam. It was not the Princes of the tribes, the men with vast herds, or it may be town lots in the cities of refuge, who betook themselves to the cave, but the discontented and the distressed, people who did not inhabit, much less own, the Belgravia of the day. The mutineers and the waverers will undoubtedly feel greatly encouraged by a defection which guarantees them against social penal- ties for ratting, and ensures them also, we suspect, against the danger of deserting the winning side. The name of the mover in such cases is almost as important as his motion, and in this instance the motion is singularly well drawn.

We may admit frankly that what the daily journals are saying is true, and that Earl Grosvenor in moving that the House insist on a completed Bill intends only to make any Bill whatsoever impossible, and still his motion remains one for which consistent Liberals can vote. It strikes not only at the greatest of the many blots in the Bill, but it strikes at the only one which it is possible for the Government to remedy without receding too visibly from its resolves. The absence of redistribution clauses makes the Government Bill abso- lutely unreasonable. Supposing that even a majority of the House of Commons accept the new franchises, or franchises so like them as not to involve a censure on the Cabinet, what will be the result? They will have intensified the grand anomalies of the present electoral system, the disparity be- tween Northern and Southern strength, the equality between Harwich with its 386 electors, and Manchester with 23,000 electors upon its roll ; and will, moreover, have enfranchised in one session whole classes whom they will be compelled to disfranchise in the next. They will be legislating absolutely in the dark, for they will not know the extent of the transfer of power to which they have resolved to accede. The qualifi- cation

has been carefully fixed at the somewhat irrational figure 7, which is not even, like the 6/. rating, the limit of direct taxation, in order to prevent working men from obtain- ing a clear majority of the borough seats, but nobody knows till the disfranchising clauses are read whether the end will be secured or no. If fifty boroughs are disfranchised and their members given to towns, it will not be secured, and Liberal Ministers have gone as far as that,—may, should a sudden cry arise, go some way farther. The Houses will be legislating at haphazard upon the one vital point of any Reform Bill, the transfer of power from a mixed constitu- ency to a constituency in which a majority belong to a single and very united class. It is unfair to Liberals who, like our- selves, consider this the one danger of our society, to compel them to vote without seeing whether the danger exists or not, in the face indeed of a declaration from Ministers that its existence will be kept perhaps till next Session a State secret. And while this compulsion is put on them, they perceive that- because it is put, because the redistribution clauses are to• form a separate Bill, the strongest wish of the nation, a settle- ment which shall last, is rendered almost hopeless. Why are Liberals who honestly want to give fifty, or sixty, or a hun- dred seats to the working men, and do not want to give them- more, who wish to remedy an injustice, but not to enthrone- Democracy, to vote for a Bill which, while it secures no peace, may give the masses perhaps fifty, perhaps two hundred mem- bers? Their pledges? Stuff; they pledged themselves to give to. the non-electors their fair share of power, and they will redeem their pledges the instant Government gives them the oppor- tunity. They did not pledge themselves to run the risk of disfranchising half the electors to whom the pledges. were given. Again, the Government can if it likes =AO. this motion without resigning, it may be, even without a divi- sion. Mr. Gladstone did not produce any argument of prin- ciple against making the Bill complete. He simply said there was not the time for it, and he may admit without discredit that he made a miscalculation of hours. Mr. Lowe will not• make two speeches on the same night because a schedule is.. tacked to the Act, and if he and his followers are a little more lengthy, so much the better for the Ministry. A bored House of Commons will pass anything rather than be bored any longer. Or if that is too hard for Mr. Gladstone's pride—and he is doing an extraordinary amount of humility just now; which suggests some inward rasp—he may take the House at its word for once, take a line of his own, and agree to a November Session, a Parliament called ad hoc. The par- tridges will all be dead then, and from 1st November to 16th December, or thereabouts, members will be just as happy in town as shivering in their counties. Let the Bill be brought, forward then, complete, and in the six weeks debated through, finished, passed, and got fairly out of the road of the State locomotive, which it has now brought for years nearly to a dead lock. If the House of Commons cannot find time to consider the representation of the nation, it had better reform its system of business until it can, for no such ex- cuse will be accepted anywhere outside its walls. It rattled a Bill transferring a trade of four millions a year from Eng- lish to German graziers through Parliament fast enough, and must on such a question as Reform, if necessary, make all the time required.

But we shall be told the Government will not yield, will not amend their Bill, will stand or fall, as they pronged to do, by their own incomplete proposal. Very good ; then they must go out. And what then ? If Earl Russell is vicious enough to recommend a Tory Administration, as his organs are threaten- ing, it will not last a year, and can be overthrown the first, moment it shows any sign of becoming dangerous. The Tories as Tories have no majority, and cannot get one, and amidst the sleepless eyes all around them, in face of wits sharpened by the hunger for office, of a party solidified by the healthy cold, they can do very little mischief. They will govern on suffer- ance till Mr. Gladstone has once more recemented the alliance now crumbling to pieces between the nation and the Whigs, an affiance without which—and we say it with no pleasure—a.

Liberal Administration is in this country never stable or strong. Sound Liberals need not shrink from that, but we do not be- lieve there is serious risk of even an interregnum of Mr. Dis- raeli. There is no coalition, and except against this Reform Bill there is not going to be one, large enough to make any numerical difference. The Grosvenors cannot play the part of the Stanleys, if they would, for their boroughs will not stand it ; and Mr. Lowe, though on this subject hopelessly wrong, is not going to lie down with the landed interest, or, raven though he be, carry meat to any of the clerical order. Without strong and numerous help what are the Tories to do Carry on daily business till their rivals are ready to take their places, and to

bring forward measures which will reduce the Tory party to powerlessness for a quarter of a century ? That is not the

kind of function Lord Derby will like, or his leading supporters either, and the catastrophe, if it comes—if Earl Russell will not hear reason, or Mr. Gladstone submit, as he keeps professing to do, to the will of the House—must end in reconstruction.

The country wants in its heart—we appeal to any decently moderate Liberal—first, to see this Reform question well and finally settled, as finality is understood in politics; then to try Mr. Gladstone as Minister for the War against pauperism, igno- rance, and all remaining internal evils ; and what the country

consciously or unconsciously really wants it will very speedily have, and that without wading, as some Radicals seem inclined to threaten, through the Red Sea to reach the Promised Land.