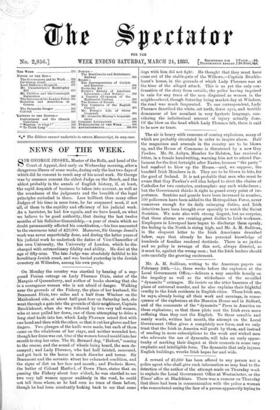 SIR GEORGE JESSEL, Master of the Rolls, and head of the Court of Appeal, died early on Wednesday morning, after a -dangerous illness of some weeks, during only the last two days of -which did he consent to remit any of his usual work. Sir George -was by common consent the ablest Judge on the Bench, and the ablest probably in the annals of English history, if, at least, the rapid despatch of business be taken into account, as well as the soundness of the judgments and the breadth of the legal principles embodied in them. Less brilliant than many other -Judges of his time in mere form, he far surpassed most, if not -all, of them in the rapidity and efficiency of his judicial work. As a barrister, he had few equals, and we have heard, on what we believe to be good authority, that during the last twelve months of his Solicitor-Generalship,—a year of strain which no doubt permanently affected his constitution,—his fees amounted to the enormous total of £23,000. Moreover, Sir George Jessel's -work was never superficially done, and daring the latter years of his judicial work he undertook the duties of Vice-Chancellor of lain own University, the University of London, which he die- -charged with extraordinary fidelity and ability. He died at the age of fifty-nine; The late Judge was absolutely faithful to his hiereditary Jewish creed, and was buried yesterday in the Jewish .cemetery at Willesden, among his own people.