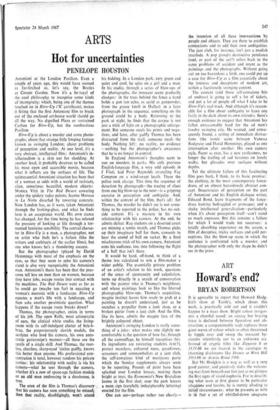 Antonioni at the London Pavilion. Even a couple of years ago, this would have seemed as far-fetched as, let's say, the Beatles at Covent Garden. Now it's a be.rayal of the cool philosophy to recognise some kinds of incongruity; which, being one of the themes touched on in Blow-Up ('X' certificate), makes it fitting that the first Antonioni film to break out of the enclosed art-house world should go all the way. No dignified Plaza or restrained Carlton for Blow-Up, but the rumbustious Pavilion.

Blow-Up is about a murder and some photo- graphs; about that strange little limping fantasy known as swinging London; about problems of perception and reality. At one level, it's a very abstract, intellectual film: Antonioni's in- tellectualism is a skin not for shedding. At another level, it probably deserves to be called his most open and accessible movie, because what it reflects are the surfaces of life. The quintessential Antonioni situation has been that of a woman at odds with a world of resistant, alien, sometimes beautiful, modern objects: Monica Vitti in The Red Desert cowering under the spidery radar pylons; Jeanne Moreau in La Notte dwarfed by towering concrete. Now London has, as it were, taken Antonioni through the looking-glass, and what he finds here is an acceptance world. His own stance has changed, for the time being he has relaxed the pressure of looking at life through a tor- mented feminine sensibility. The central charac- ter in Blow-Up is a man, a photographer, not an artist who feels he's a failure (like the writers and architects of the earlier films), but one who knows he's a thundering success.

But the photographer (played by David Hemmings with most of the emphasis on the eyes, so that they seem to echo his camera's stare) is also very recognisably the Antonioni man. Antonioni's thesis has been that the pres- sures tell less on men than on women, because they have jobs, escape routes into contact with the machines. The Red Desert went as far as he could go (maybe too far) in equating a woman's neurosis with a landscape. Blow-Up equates a man's life with a landscape, and then asks another pessimistic question. What happens if the escape route breaks down?

Thomas, the photographer, exists in terms of his job. The open Rolls, most aristocratic of cars, the clinical white studio, the living- room with its self-indulgent clutter of bric-h- brac, the preposterously slavish models, the acolytes who load his camera, his own auto- cratic guttersnipe's manner—all these are the spoils of a single skill. And Thomas, the root- less, classless, sharp-eyed 'sixties gadfly, knows this better than anyone. His professional con- centration is total, however random his private sorties: his relationship with reality is via his camera—what he sees through the camera, whether it's a row of space-age fashion models or an old man undressing in a dosshouse, is true.

The crux of the film is Thomas's discovery , that his camera has seen something he missed; then that reality, disobligingly, won't attend

his bidding. In a London park, very green and quiet and cool, he spies on a girl and a man. In his studio, through a series of blow-ups of the photographs, the innocent scene gradually changes: in the trees behind the fence a hand holds a gun (an echo, as acrid as gunpowder, from the grassy knoll in Dallas); in a later photograph in the sequence, something on the ground could be a body. Returning to the park at night, he finds that the corpse is not just a trick of light on a photographic enlarge- ment. But someone steals his prints and nega- tives; and later, after gadfly Thomas has been distracted from the trail, someone steals the body. Nothing left: no reality, no evidence —nothing but the photographer's awareness that be is no longer in control.

In England Antonioni's thoughts seem to run on murders in parks. His only previous English-language film, a very odd episode in I Vinti, had Peter Reynolds strangling Fay Compton on a wind-swept heath. There the police took charge. This time the sequence of detection by photograph—the tracing of clues from one big blow-up to the next—is a gripping exercise in perception and ambiguity. And, within the context of the film, that's all: for Thomas, the murder he didn't see is not some- thing to be reported to the police, has no out- side context. It's a mystery in his own relationship with his camera. At the end, he admits defeat. Rag students on a deserted court are miming a tennis match, and Thomas picks up their imaginary ball for them, consents to hear the sound of ball on racket. By a final mischievous trick of his own camera, Antonioni cons his audience, too, into following the flight of a ball that isn't there.

It would be hard, off-hand, to think of a theme less calculated to win a film-maker a wider public. The essentially private problem of an artist's relation to his work, questions of the areas of spontaneity and calculation, turns up directly in a snatch of conversation with the painter who is Thomas's neighbour, and whose paintings look so like the blurred photographic blow-ups. Thomas's acquisitive, magpie instinct leaves him ready to grab at a painting he doesn't understand, just as he snatches a propeller from a junk shop, or a broken guitar from a jazz club. And the film, like its hero, admits the magpie lure of the brightly coloured object.

Antonioni's swinging London is really some- thing of a joke: what makes one slightly un- comfortable is the question of how far, through all the camouflage, he himself recognises this. Its ingredients are roistering students 0-se?), protest marchers, coloured nuns, guardsmen, screamers and somnambulists at a jazz club, the self-conscious kind of marijuana party which the Sunday supplements always seem to be reporting. Pounds of paint have been splashed over London houses, making .them bright as toys; the Economist's New Brutalism looms in the first shot; over the park hovers a neon sign (carefully indecipherable lettering) erected for the film.

One can see—perhaps rather too clearly—

the intention of all these interventions by people and objects. They are there to establish connections and to add their own ambiguities. The jazz club, for instance, isn't just a modish interlude. A pop group's destructive petulance (real, or part of the act?) refers back to the same problems of accident and intent as the paintings and the photographs. Without going out on too hazardous a limb, one could put up a case for Blow-Up as a film essentially about the textures and deceptions of modern art, within a factitiously swinging context.

The context (and those self-conscious bits of undress) is going to sell a lot of tickets, and put a lot of people off what I take to be Blow-Up's real track. And although it's reason- able for a film about ambiguity to leave one fairly in the dark about its own attitudes, there's enough evidence to suggest that Antonioni has fallen unreasonably hard for the ad men's tawdry swinging city. He wanted, and conse- quently found, a setting of immediate distrac- tions (the ironic scene between Vanessa Redgrave and David Hemmings, played as one interruption after another. His own camera style, fluent as ever, has a new restlessness, no longer the trailing of sad heroines on lonely walks, but glissades over surfaces without depths.

Yet the ultimate failure of this fascinating film goes back, I think, to its basic premise: the clothing, in the most contemporary fancy- dress, of an almost hazardously abstract con- cept. Inaccuracies of perception on the part of Antonioni and his English dialogue writer, Edward Bond, leave fragments of the fancy- dress looking bedraggled or grotesque; and a shaky intellectual generalisation—particularly when it's about perception itself—can't stand so much exposure. But this remains a failure for which I would trade ten successes: a totally absorbing experience on the screen, a filni of deceptive, tricky surfaces and cold per- ceptions, like the blow-up scene in which the audience is confronted with a murder, and the photographer with only the shape he didn't sec in the grass.