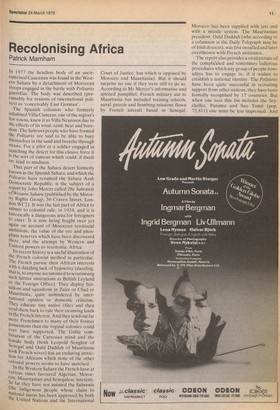 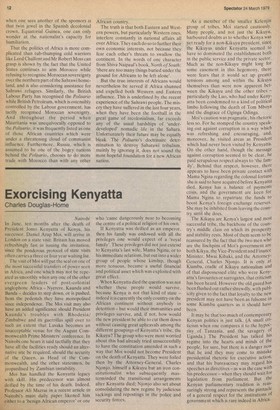 111 1977 the headless body of an uncircumcised Caucasian was found in the Western Sahara by a detachment of Moroccan troops engaged in the battle with Polisario guerrillas. The body was described (presumably for reasons of international politics) as 'conceivably East German'.

The Spanish colonists who formerly inhabited Villa Cisneros, one of the region's few towns, knew it as Villa Neurosos due to the effects of its wind, sand, heat and boredom. The Sahrawi people who have formed the Polisario are said to be able to bury themselves in the sand and breathe through straws. For a pilot or a soldier engaged in searching the desert for this elusive force it IS the sort of rumour which could, if dwelt on, lead to madness.

That part of the Sahara desert formerly known as the Spanish Sahara, and which the Polisario have renamed the Sahara Arab Democratic Republic, is the subject of a report by John Mercer called The Sahrawis of Western Sahara (published by the Minority Rights Group, 36 Craven Street, London WC2). It was the last part of Africa to submit to colonial rule, in 1934, and it is historically a dangerous area for foreigners to enter. It is now being fought over yet again on account of Moroccan territorial ambitions, the value of the ore and phosphate reserves which have been discovered there, and the attempt by Western and Eastern powers to recolonise Africa. Its recent history is a useful illustration of the French colonial method in particular. The French pursue their African interests With a dazzling lack of hypocrisy (dazzling, that is, to anyone accustomed to scrutinising such furtive institutions as British Leyland or the Foreign Office). They deploy battalions and squadrons in Zaire or Chad or Mauritania, quite unhindered by international opinion or domestic criticism. They educate tiny native elites and then erid them back to rule their steaming lands in the French interest. And they send out far more Frenchmen to many of their former Possessions than the tirginal colonies could ever have supported. The Gallic combination of the Cartesian mind and the female body (both Leopold Senghor of Senegal and Ould Daddah of Mauritania took French wives) has an enduring attraction for Africans which none of the other colonial powers seems to have matched. In the Western Sahara the French have at various times favoured Algerian, Moroccan, Mauritanian and Senegalese interests. So far they have not assisted the Sahrawis (the indigenous people whose claim to national status has been approved by both the United Nations and the International Court of Justice, but which is opposed by Morocco and Mauritania). But it should surprise no one if they were still to do so. According to Mr Mercer's informative and spirited pamphlet, French military aid to Mauritania has included training schools, naval patrols and bombing missions flown by French aircraft based in Senegal. Morocco has been supplied with jets and with a missile system. The Mauritanian president, Ould Daddah (who according to a columnist in the Daily Telegraph may be of Irish descent), was first installed and later overthrown with French assistance.

The report also provides a vivid picture of the compliCated and sometimes ludicrous procedures which any group of people nowadays has to engage in, if it wishes to establish a national identity. The PolLsario have been quite successful in recruiting support from other nations, they have been formally recognised by 17 countries. But when one sees this list includes the Seychelles, Panama and Sao Tome (pop. 73,811) one must be less impressed. And when one sees another of the sponsors is that twin jewel in the Spanish decolonial crown, Equatorial Guinea, one can only wonder at the nationalist's capacity for humiliation.

That the politics of Africa is more complicated than tub-thumping cold warriors like Lord Chalfont and Mr Robert Moss can grasp is shown by the fact that the United States continues to arm Morocco while refusing to recognise Moroccan sovereignty over the northern part of the Sahrawi homeland, and is also considering assistance for Sahrawi refugees. Similarly, the British Labour Party has recognised the Polisario while British Petroleum, which is ostensibly controlled by the Labour government, has tacitly recognised Moroccan sovereignty. And throughout the period when Mauritania was unequivocally opposed to the Polisario, it was frequently listed as one of those African countries which were under a threatening cloud of communist influence. Furthermore, Russia, which is assumed to be one of the bogey nations behind the Polisario, chooses to do more trade with Morocco than with any other African country.

The truth is that both Eastern and Western powers, but particularly Western ones, interfere constantly in national affairs all over Africa. They each do so to further their own economic interests, not because they fear each other's threats to swallow the continent. In the words of one character from Shiva Naipaul's book, North of South: 'there are too many things buried under the ground for Africans to be left alone'.

But the true interests of Africans would nevertheless be served if Africa shunned and expelled both Western and Eastern influence. This is underlined by the recent experience of the Sahrawi people. The misery they have suffered in the last four years, when they have been the football in the great game of recolonialism, far exceeds any of the usual hardships of 'underdeveloped' nomadic life in the Sahara. Unfortunately their future may be equally bleak. The Polisario's doctrinaire determination to destroy Saharawi tribalism, mainly by ignoring it, does not sound the most hopeful foundation for a new African nation.