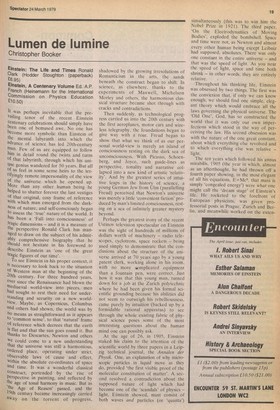 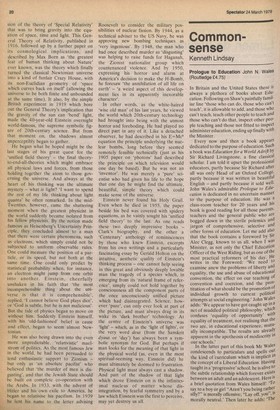 Einstein: The Life and Times Ronald Clark (Hodder Stoughton (paperback) 26.95) Einstein, A Centenary Volume Ed. A.P. French (Heinemann for the International Commission on Physics Education 210.50) It was perhaps inevitable that the prevailing tenor of the recent Einstein centenary celebrations should simply have been one of bemused awe. No one has become more symbolic than Einstein of the mental labyrinth into which the advance of science has led 20th-century man. Few of us are equipped to follow him in detail round the twists and turns of that labyrinth, through which his unique genius wandered for 50 years. But all of us feel in some sense heirs to the terrifyingly remote impersonality of the view of the universe which he opened up. More than any other human being he helped to shatter forever the last vestiges of that original, cosy frame of reference With which man emerged from the darkness of nature, and self-consciously began to assess the 'true' nature of the world. It has been a 'Fall into consciousness' of .tragic dimensions — and it is a measure of the perspective Ronald Clark has managed to draw on the subject of his admirably comprehensive biography that he Should not hesitate in his foreword to describe Einstein as 'one of the great tragic figures of our time'. To see Einstein in his proper context, it IS necessary to look back to the situation of Western man at the beginning of the 20th century. For three hundred years, ever since the Renaissance had blown the Mediaeval world-view into pieces, men had sought to rest their need for understanding and security on a new world view. Maybe, as Copernicus, Columbus and others had shown, the world was by no means as straightforward as it appears to 'Common sense', to that 'natural' frame of reference which decrees that the earth IS flat and that the sun goes round it. But thanks to Descartes, Newton and others We could come to a new understanding that the universe was still a harmonious, ordered place, operating under strict, Observable laws of cause and effect, Within the absolute co-ordinates of space and time. It was a wonderful classical construct, portended by the rise of Perspective in painting, and reflected by the age of tonal harmony in music. But as the Age of Reason' passed, and the 19th centuty became increasingly carried away on the torrent of progress, shadowed by the growing irresolutions of Romanticism in the arts, the sands beneath the construct began to shift. In science, as elsewhere, thanks to the experiments of Maxwell, Michelson Morley and others, the harmonious classical structure became shot through with cracks and contradictions.

Then suddenly, as technological progress carried us into the 20th century with the first aeroplanes, motor cars and wireless telegraphy, the foundations began to give way with a roar. Freud began to show that what we think of as our personal world-view is merely an island of consciousness resting on the dark sea of unconsciousness. With Picasso, Schoenberg, and Joyce, such guide-lines as perspective, tonality and narrative collapsed into a new kind of artistic 'relativity'. And by the greatest series of intuitive leaps in the history of science, a young German Jew from Ulm (parallelling Freud) perceived that Newton's universe was merely a little 'convenient fiction' produced by man's limited consciousness, resting on a sea of infinitely greater mystery beyond.

Perhaps the greatest irony of the recent Ustinov television spectacular on Einstein was the sight of hundreds of millions of dollars worth of machinery — radio telescopes, cyclotrons, space rockets — being used simply to demonstrate that the conclusions about the structure of the universe arrived at 70 years ago by a young patent clerk, working alone in his room, with no more GiOmplicated equipment than a fountain pen, were correct. Just how it was that this young man, turned down for a job at the Zurich polytechnic where he had been given his formal scientific grounding because his abilities did not seem to outweigh his rebelliousness, came purely by intuition -(backed up by a formidable rational apparatus) to see through the whole existing fabric of physical science poses some of the most interesting questions about the human mind one can possibly ask.

At the age of 26, in 1905, Einstein staked his claim to the attention of the scientific world by three papers in a Leip zig technical journal, the Annalen der Physik. One, an explanation of why micro scopic particles in liquid move as they do, provided 'the first visible proof of the molecular constitution of matter'. A sec ond resolved a contradiction about the supposed nature of light which had become one of the 'scandals' of physics — light, Einstein showed, must consist of both waves and particles (or 'quanta') simultaneously (this was to win him the Nobel Prize in 1921). The third paper, 'On the Electrodynamics of Moving Bodies', exploded, the bombshell. Space and time were not, as Newton and almost every other human being except Leibniz had supposed, absolutes. There was only one constant in the entire universe — and that was the speed of light. As you near the speed of light, space and time both shrink — in other words, they are entirely relative.

Throughout his thinking life, Einstein was obsessed by two things. The first was the conviction that, if only we can know enough, we should find one simple, elegant theory which would embrace all the laws governing the physical universe. The 'Old One', God, has so constructed the world that it was only our own imperfections which stood in the way of perceiving the law. His second obsession was with the nature of the one great constant, about which everything else revolved and to which everything else was relative — light.

The ten years which followed his annus mirabilis, 1905 (the year in which, almost as •an afterthought, he had thrown off a fourth paper showing, in the most elegant of all his equations, E=Mc2, that mass is simply 'congealed energy') were what one might call the 'dream stage' of Einstein's life. He rocketed to the forefront of European physicists, was given professorial posts in Prague, Zurich and Berlin, and meanwhile worked on the exten sion of the theory of 'Special Relativity' that was to bring gravity into the equation of space, time and light. This General Theory of Relativity, published in 1916, followed up by a further paper on its cosmological implications, and described by Max Born as 'the greatest feat of human thinking about Nature' ever known, was the theory which finally turned the classical Newtonian universe into a kind of funfair Crazy House, with its non-Euclidian geometry of 'space which curves back on itself (allowing the universe to be both finite and unbounded at the same time). It also, by the simple British experiment in 1919 which bore out the General Theory's implication that the gravity of the sun can 'bend' light, made the 40-year-old Einstein overnight world-famous, the supreme symbolic figure of 20th-century science. But from that moment on, the shadows almost imperceptibly began to gather.

He began what he hoped might be the last stages of his great quest for the 'unified field theory' — the final theoryto-end-all-theories which might embrace all physical laws and forces, from those holding together the atom to those governing the universe. And always at the heart of his thinking was the ultimate mystery — what is light? 'I want to spend the rest of my life thinking about light quanta' he often remarked. In the midTwenties, however, came the shattering moment when the greatest physicist in the world suddenly became isolated from his fellow physicists. By the notion made famous as Heisenberg's Uncertainty Principle, they concluded almost to a man that there were certain phenomena, such as electrons, which simply could not be subjected to uniform observable rules. One could measure the position of a particle, or its speed, but not both at the same time. One could only predict by statistical probability when, for instance, an electron might jump from one orbit into another. Einstein, cheerfully unshaken in his faith that 'the most incomprehensible thing about the universe is that it is comprehensible', replied, 'I cannot believe God plays dice', or 'God is subtle, but he is not malicious'. But the tide of physics began to move on without him. Suddenly Einstein himself, with his 'old-fashioned' belief in cause and effect, began to seem almost Newtonian.

He was also being drawn into the even more unpredictable. 'relativistic' maelstrom of politics. As the most famous Jew in the world, he had been persuaded to lend enthusiastic support to Zionism — but only as 'an absolute pacifist' who believed that 'the murder of men is disgusting', and that the Jewish State should be built on complete co-operation with the Arabs. In 1933, with the advent of Hitler and his own exile to America, he began to relativise his pacifism. In 1939 he lent his name to the letter advising Roosevelt to consider the military possibilities of nuclear fission. By 1944, as a technical adviser to the US Navy, he was approving new bombing techniques as 'very ingenious'. By 1948, the man who had once described murder as 'disgusting' was helping to raise funds for Haganah, the Zionist nationalist group which countenanced violence. And by 1950, expressing his horror and alarm at America's decision to make the H-Bomb, he foresaw 'the annihilation of all life on earth' — 'a weird aspect of this development lies in its apparently inexorable character'.

In other words, as the white-haired 'wise old man' of his last years, he viewed the world which 20th-century technology had brought into being with the utmost horror and foreboding. He had played no direct part in any of it. Like a detached observer, he had described in his E=Mc2 equation the principle underlying the nuclear bombs, long before they seemed remotely feasible technically (just as his 1905 paper on 'photons' had described the principle on which television would one day be based). But he was not an 'inventor'. He was merely a 'pure' scientist who had given his life to the hope that one day he might find the ultimate, beautiful, simple theory which could make sense of the universe.

Einstein never found his Holy Grail. Even when he died in 1955, the paper beside his bed was covered with spidery equations, as he vainly sought his 'unified field theory' to the last. As one reads these two deeply impressive books — Clark's biography, and the other a 'Centenary' anthology of reminiscences by those who knew Einstein, excerpts from his own writings and a particularly fascinating essay by Gerald Holton on the intuitive, aesthetic quality of Einstein's thinking process — one cannot help seeing in this great and obviously deeply lovable man the tragedy of a species which, in emerging from its 'natural frame of reference', simply could not hold together by consciousness all the component parts of the once unconsciously unified picture which had disintegrated. Science, however 'pure', can only ever look at part of the picture, and must always drag in its wake its 'dark brother' technology. At the centre of Einstein's universe was 'light' — which, as in the 'light of lights', or the very word deus (from the Sanskrit dyaus or 'day') has always been a symbolic synonym for God. But perhaps if man looks for the meaning of that light in the physical world (as, even in the most spiritual-seeming way. Einstein did) he must ultimately be doomed to frustration. Physical light must always cast a shadow. And part of the shadow of that light which drove Einstein on is the infinitesimal nucleus of matter whose disintegration, by fearful symmetry and by a law which Einstein was the first to perceive, may yet destroy us all.