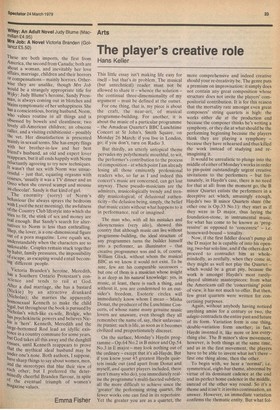 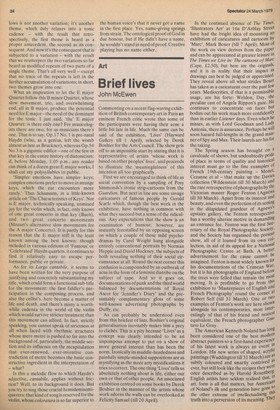 This little essay isn't making life easy for itself — but that's its problem. The musical (but untechnical) reader must not be allowed to share it — whence the solution — the continual three-dimensionality of my argument — must be defined at the outset.

For one thing, that is, my piece is about the craft, the near-art, of musical programme-building. For another, it is about the music of a particular programme — the Amadeus Quartet's BBC Lunchtime Concert at St John's, Smith Square, on Monday 26 March: if you live in London, go; if you don't, turn on Radio 3.

But thirdly, an utterly untopical theme pervades my polythematic mouthful, to wit, the performer's contribution to the process of composition— at which point lam already losing all those eminently professional readers who, so far as I and indeed this concert's music are concerned, can get lost anyway. These pseudo-musicians are the admirers, musicologically trendy and trendily musicological, of delusional authenticity — the delusion being, simply, the belief that music exists without what happens to it in performance, real or imagined.

The man who, with all his mistakes and idiosyncrasies (very idio), showed this country that although music can live without programme-building, the ideal structure of any programmes turns the builder himself into a performer, an illuminator — that creative programmer was and is, of course, William Glock, without whom the musical BBC as we know it would not exist. To be sure, few are his comparable successors — but one of them is a musician whose insight is as deep as his natural knowledge: yes, in music, at least, there is such a thing, and without it, you are condemned to an outsider's freedom. Esoteric circles will immediately know whom I mean — Misha Donat, the producer of the Lunchtime Concerts, of whose name many genuine music lovers are unaware, even though they all remember the name of, say, their unfavourite pianist: such is life, as soon as it becomes civilized and proportionately discreet.

On the surface, Monday's Haydn programme — Op.64 No.2 in B minor and Op.54 No.3 in E major — may look nothing out of the ordinary — except that it's all-Haydn. But if you know your 45 greatest Haydn quartets inside out (and apart from Donat and myself, and quartet players included, there aren't many who do), you immediately realise the programme's multi-faceted subtlety, all the more difficult to achieve since the 'greater' the performing string quartet, the fewer works one can find in its repertoire. Yet the greater you are as a quartet, the more comprehensive and indeed creative should your re-creativity be. The genre puts a premium on improvisation: it simply does not contain any great composition whose structure does not invite the players' cornpositorial contribution. It is for this reason that the mortality rate amongst even great composers' string quartets is high: the works either die at the production end because the composer thinks he's writing a symphony, or they die at what should be the performing beginning because the players think they are playing a symphony — because they have rehearsed and thus killed the work instead of studying and reimagining it.

It would be unrealistic to plunge into the middle of either of Monday's works in order to pin-point outstandingly urgent creative invitations to the performers — but fortunately, in Haydn's case, there is no need for that at all: from the moment go, the B minor Quartet enlists the performers in a deceptive act which, amusingly enough, Haydn's two B minor Quartets share (the other one is Op.33 No.!): they start as if they were in D major, thus laying the foundation-stone, in instrumental music, for what has come to be known as 'progressive' as opposed to 'concentric' — i.e. homeward-bound — tonality.

Now, if the first fiddler doesn't pump all the D major he is capable of into his opening, two-bar solo line, and if the others don't proceed to contradict him as wholemindedly, as zestfully, when they come in, they might as well not play the Quartet — which would be a great pity, because the work is amongst Haydn's most rarelyplayed ultimate masterpieces: from what the Americans call the 'concertising' point of view, it has not much to offer. But then, few great quartets were written for concertising purposes. Again, without anybody having noticed anything amiss for a century or two, the adagio contradicts the entire past and future of its form. Variation form is one thing, double-variation form another; in fact, Haydn invented it, like more or less every thing else. The B minor's slow movement, however, is both things at the same time, and as in the first movement, the players have to be able to invent what isn't there — first one thing alone, then the other.

To begin with, we hear a 'normal', i.e. symmetrical, eight-bar theme, abnormal by virtue of its dominant cadence at the end and its perfect home cadence in the middle, instead of the other way round. So it's a theme and it isn't: it invites continuation, an answer. However, an immediate variation confirms the thematic entity. But what fol lows is not another variation; it's another theme, which duly relaxes into a tonic cadence — with the result that retrospectively, the first theme is heard as a proper antecedent, the second as its consequent. And now it's the consequent that is subjected to a variation — with the result that we reinterpret the two variations so far heard as modified repeats of two parts of a single theme. That's all very well — except that no trace of the repeats is left in the further accumulation of variations; in short, two themes grow into one.

What an inspiration to let the E major Quartet follow this B minor Quartet, whose slow movement, trio, and overwhelming end, all in B major, produce the potential need for E major—the need of the dominant for the tonic. I just said, 'the' E major Quartet: is there only one? For musicologists there are two; for us musicians there's one. That is to say, Op.17 No. 1 is pre-natal Haydn (who, as a genius, left the womb almost as late as Bruckner), whereas Op.54 No.3 is a gigantic edifice — one of the few in that key in the entire history of diatonicism: if, before Monday, 1.05 p.m., any reader can think of a dozen great E major works. I shall eat my polysyllables in public.

'Simpler emotions have simpler keys; complex emotions prefer to move in strange keys, which the ear encounters more rarely.' Thus Schumann, in a little-known article on 'The Characteristics of Keys'. Nor is E major, technically speaking, unmixed joy for the violin which, in fact, only knows of one great concerto in that key (Bach), and two great concerto movements (Mozart's alternative slow movements for the A major Concerto). It is partly for this reason that the E major still is the least known among the best known: though included in various editions of 'Famous' or 'Celebrated' Haydn quartets, it continues to find it relatively easy to escape performance, public or private.

As for its Largo cantabile, it seems to have been written for the very purpose of justifying and concretely substantiating my title, which could form a functional sub-title for the movement: the first fiddler's participation in the composing process, and also the cellist's, here become a matter of life and death, and there's many a worthwhile cadenza in the world of the violin which would survive stricter treatment than this movement can afford. In fact, strictly speaking, you cannot speak of strictness at all when faced with rhythmic structures whose mere metre is pushed so far into the background of, particularly, the middle section and its influence on the recapitulation that ever-renewed, ever-inventive contradiction of metre becomes the basic constructive ingredient in the interpretation of — what?

Is this a melodic flow to which Haydn's adjective, cantabile, applies without friction? Well, to its background it does. But you try to sing those crucial hemidemisemiquavers: that kind of song is reserved for the violin, whose coloratura is so far superior to the human voice's that it never got a name in the first place. Yes, name-giving springs from strain. The ontological proof of God in due honour, but if He didn't have a name, he wouldn't stand in need of proof. Creative playing has no name either.