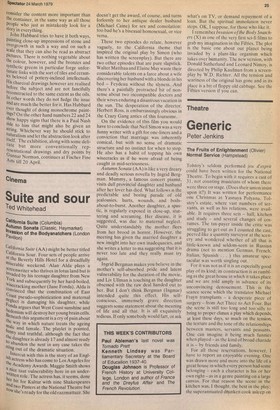 California Suite (Columbia) Autumn Sonata (Classic, Haymarket) invasion of the Bodysnatchers (London Pavilion) California Suite (AA) might be better titled California Sour. Four sets of people arrive at the Beverly Hills Hotel for a dreadfully miserable weekend. Alan Alda plays a ereenwriter who thrives in lotus land but is invaded by his teenage daughter from New York and subsequently by her hard-boiled, wisecracking mother (Jane Fonda). Alda is convinced that the combination of East Coast pseudo-sophistication and maternal aeglect is damaging his daughter, while l'onda argues that West Coast sunshine and 11,,eclonism will destroy her young brain cells. 15,',eneath this argument is a cry of pain about 'fie Way in which nature treats the ageing crnale and female. The playlet is pointed, 'tinny and truthful, although the fact that the daughter is already 17 and almost ready to. abandon the nest in any case takes the sting out of the dramatic situation. . Intercut with this is the story of an English actress whO has come to Los Angeles for the.Academy Awards. Maggie Smith shows a .ice taut vulnerability here in an underWritten role. The actress has, it seems, done her bit for Kultur with nine Shakespeares and two Pinters at the National Theatre but now she's ready for the old razzmattazz. She doesn't get the award, of course, and turns forlornly to her antique dealer husband (Michael Caine) for sex and consolation: too bad he's a bisexual homosexual, or vice versa.

These two episodes do relate, however vaguely, to the California theme that inspired the original play by Simon (who has written the screenplay). But there are two other episodes that are pure slapstick. Walter Matthau and Elaine May waste their considerable talents on a farce about a wife discovering her husband with a blonde in his bed — Feydeau without the slyness. And there's a painfully protracted bit of nonsense about two incompatible doctors and their wives enduring a disastrous vacation in the sun. The desperation of the director, Herbert Ross, is embarrassingly obvious in the Crazy Gang antics of this foursome.

On the evidence of this film you would have to conclude that Neil Simon was a very funny writer with a gift for one-liners and a conviction that marriage was inherently comical, but with no sense of dramatic structure and no instinct for when to stop. He also has a habit of topping his own wisecracks as if he were afraid of being caught in mid-seriousness.

Autumn Sonata (AA) is like a very dreary and deadly serious novella by Ingrid Bergman. Mummy, a famous concert pianist, visits dull provincial daughter and husband after her lover has died. What follows is the predictable and boring parade of old jealousies, hurts, wounds, and boilsabout-to-burst. Another daughter, a spastic, is regularly exposed in close-up, stuttering and screaming. Her disease, it is suggested, was due to maternal neglect.

Quite understandably the mother flees from her brood in horror. However, the meeting has given the married daughter a new insight into her own inadequacies, and she writes a letter to ma suggesting that it is never too late and they really must try again.

Ingrid Bergman makes you believe in the mother's self-absorbed pride and latent vulnerability for the duration of the movie, and Liv Ullman is touching as the daughter obsessed with the raw deal handed out to her. But I don't think Bergman (Ingmar) intended quite this effect. His selfconscious, immensely grave direction suggests some statement about the meaning of life and all that. It is all exquisitely tedious. If only somebody would fart, or ask what's on TV, or demand repayment of a loan. But the spiritual immolation never stops. OK, I suppose, for those who like it.

I remember Invasion ofthe Body Snatchers (X) as one of the very first sci-fi films to grab my imagination in the Fifties. The plot is the basic one about our planet being invaded by a plant-like organism which takes over humanity. The new version, with Donald Sutherland and Leonard Nimoy, is directed by Philip Kaufman from a screenplay by W.D. Richter. All the tension and scariness of the original has gone and in its place is a bit of floppy old cabbage. See the Fifties version if you can.