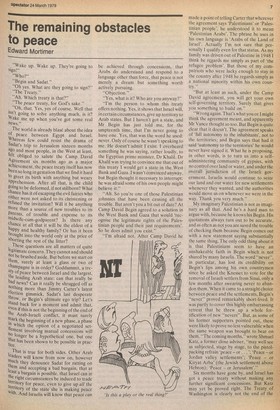 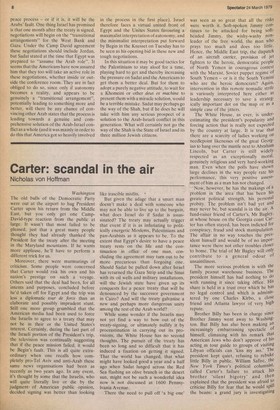 The remaining obstacles to peace

"Oh yes. What are they going to sign?" "The Treaty." "Ah. Which treaty is that?" "The peace treaty, for God's sake." "Oh, that. Yes, yes of course. Well that isn't going to solve anything much, is it? Wake me up when you've got some real news."

The world is already blasé about the idea of peace between Egypt and Israel. Whereas few could resist the drama of Sadat's trip to Jerusalem sixteen months ago and most people, in the West at least, felt obliged to salute the Camp David Agreement six months ago as a major achievement, the peace treaty itself has now been so long in gestation that we find it hard to greet its birth with anything but weary apprehension. After all that, is the child going to be deformed, if not stillborn? What Chance has it of escaping the evil fairies Who either were not asked to its christening or refused the invitation? Will it be anything more than a source of new troubles to its Parents, of trouble and expense to its midwife-cum-godparent? Is there any Chance at all that it will be the eldest of a happy and healthy family? Or has it been brought into the world only at the price of aborting the rest of the litter? These questions are all matters of quite legitimate concern. They cannot and should not be brushed aside. But before we start on them, surely at least a glass or two of champagne is in order? Goddammit, a treaty of peace between Israel and the largest, the leading Arab state: can that really be bad news? Can it really be shrugged off as nothing more than Jimmy Carter's latest election gimmick, Sadat's last desperate throw, or Begin's ultimate ego trip? Let's stand back for a moment and admit that, even if this is not the beginning of the end of the Arab-Israeli conflict, it must surely Mark the beginning of a new phase, a phase in which the option of a negotiated settlement involving mutual concessions will no longer be a hypothetical one, but one that has been shown to be possible in practice.

That is true for both sides. Other Arab I eaders will know from now on, however much they denounce Sadat for ratting on them and accepting a bad bargain, that at least a bargain is possible, that Israel can in the right circumstances be induced to trade territory for peace, even to give up all the territory of the state she is making peace With. And Israelis will know that peace can be achieved through concessions, that Arabs do understand and respond to a language other than force, that peace is not merely a dream but something worth actively pursuing.

"I'm the person to whom this treaty offers nothing. Yes, it shows that Israel will, in certain circumstances, give up territory to Arab states. But I haven't got a state, and Mr Begin has just told me, for the umpteenth time, that I'm never going to have one. Yes, that was the word he used: never. Only of course he wasn't speaking to me. He doesn't admit I exist. I overheard something he was saying, rather loudly, to the Egyptian prime minister, Dr Khalil. Dr Khalil was trying to convince me that out of this treaty I would get a state in the West Bank and Gaza. I wasn't convinced anyway, but Begin thought it necessary to interrupt: he was afraid some of his own people might believe it."

"Ah. So you're one of those Palestinian johnnies that have been causing all the trouble. But aren't you a bit out of date? At Camp David Begin agreed to a solution in the West Bank and Gaza that would 'recognise the legitimate rights of the Palestinian people and their just requirements'. So he does admit you exist."

"I'm afraid not. After Camp David he made a point of telling Carter that wherever the agreement says 'Palestinians' or 'Palestinian people', he understood it to mean 'Palestinian Arabs'. The phrase he uses in his own language is 'Arabs of the Land of Israel'. Actually I'm not sure that personally I qualify even for that status. As my family was driven out of Palestine in 1948 I think he regards me simply as part of 'the refugee problem'. But those of my compatriots who were lucky enough to stay in the country after 1948 he regards simply as a national minority within his own country."

"But at least as such, under the Camp David agreement, you will get your own self-governing territory. Surely that gives you something to build on."

"Wrong again. That's what you or 1 might think the agreement meant, and apparently Mr Vance thought so too. But Begin is quite clear that it doesn't. The agreement speaks of 'full autonomy to the inhabitants', not to the territories; and Begin says that had it said 'autonomy to the territories' he would never have signed it. What he is proposing, in other words, is to turn us into a selfadministering community of gypsies, with no control over land or water, and under the overall jurisdiction of the Israeli government. Israelis would continue to seize our land and our water for new settlements whenever they wanted, and the authorities would move us on whenever we were in the way. Thank you very much."

My imaginary Palestinian is not as imaginary as all that. And he's a hard man to argue with, because he knows his Begin. His quotations always turn out to be accurate, and as often as not you are saved the trouble of checking them because Begin comes out with a new statement saying substantially the same thing. The only odd thing about it is that Palestinians seem to have an unshakeable faith in Begin which is not shared by many Israelis. The word "never", in particular, has lost its credibility on Begin's lips among his own countrymen since he asked the Knesset to vote for the removal of Israeli settlers from Sinai, only a few months after swearing never to aban don them. When it came to a straight choice between peace and the settlements, Begin's "never" proved remarkably short-lived. It was partly to cover this highly embarrassing retreat that he threw up a whole for tification of new "nevers". But, as some of his former supporters pointed out, these were likely to prove no less vulnerable when the same weapon was brought to bear on them. "The coming months," wrote Shmuel Katz, a former close adviser, "may well see us subjected, stage by stage, to the pistolpacking refrain 'peace — or. . . 'Peace — or Jordan valley settlements'; 'Peace — or Kiryat Arba' (the Jewish settlement above Hebron); 'Peace — or Jerusalem'."

Six months have gone by, and Israel has got a peace treaty without making any further significant concessions. But Katz may yet be proved right. The Treaty of Washington is clearly not the end of the peace process — or if it is, it will be the .Arabs' fault. One thing Israel has promised is that one month after the treaty is signed, negotiations will begin on the "transitional arrangements" for the West Bank and Gaza. Under the Camp David agreement these negotiations should include Jordan, but Sadat stated at the time that Egypt was prepared to "assume the Arab role". It seems that the Americans have now assured him that they too will take an active role in these negotiations, whether inside or outside the conference room. They are in fact obliged to do so, since only if autonomy becomes a reality, and appears to be genuinely a "transitional arrangement", potentially leading to something more and better, will there be any chance of convincing other Arab states that the process is leading towards a genuine and comprehensive solution of the Arab-Israel conflict as a whole (and it was mainly in order to do this that America got so heavily involved in the process in the first place). Israel therefore faces a virtual united front of Egypt and the Unites States favouring a maximalist interpretation of autonomy, and the minimalist interpretation put forward by Begin in the Knesset on Tuesday has to be seen as his opening bid in these new and tough negotiations.

In this situation it may be good tactics for the Palestinians to stay aloof for a time, playing hard to get and thereby increasing the pressure on Sadat and the Americans to get them a better deal. But for them to adopt a purely negative attitude, to wait for a Khomeini or other deus ex machina to present them with a miracle solution, would be a terrible mistake. Sadat may perhaps go the way of the Shah, but if he does he will take with him any serious prospect of a solution to the Arab-Israeli conflict in this generation. What will certainly not go the way of the Shah is the State of Israel and its three million Jewish citizens.