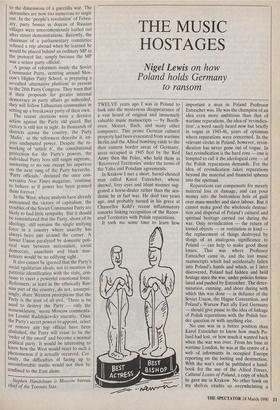 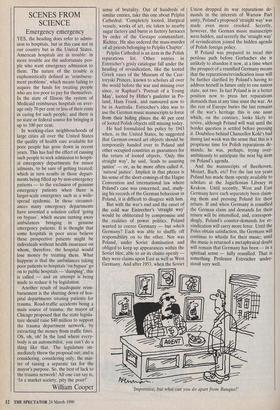 Nigel Lewis on how

TWELVE years ago I was in Poland to look into the mysterious disappearance of a vast hoard of original and immensely valuable music manuscripts — by Beeth- oven, Mozart, Bach, and many other composers. This prime German cultural property had been evacuated from wartime Berlin and the Allied bombing raids to the then eastern border areas of Germany, areas occupied in 1945 first by the Red Army then the Poles, Who held them as `Recovered Territories' under the terms of the Yalta and Potsdam agreements.

In Krakow I met a short, barrel-chested man called Karol Estreicher, whose shrewd, foxy eyes and blunt manner sug- gested a horse-dealer rather than the aca- demic he in fact was. He died two years ago, and probably turned in his grave at Chancellor Kohl's recent inflammatory remarks linking recognition of the Recov- ered Territories with Polish reparations.

It took me some time to learn how

important a man in Poland Professor Estreicher was. He was the champion of an idea even more ambitious than that of wartime reparations, the idea of `revindica- tion', a word rarely heard now but briefly in vogue in 1945-46, years of optimism where reparations were concerned. In the relevant circles in Poland, however, revin- dication has never gone out of vogue. In fact revindication is the hard core — one is tempted to call it the ideological core — of the Polish reparations demands. For the idea of revindication takes reparations beyond the material and financial spheres into the spiritual.

Reparations can compensate for merely material loss or damage, and can pour money into the bottomless hole of guilt over mass-murder and slave labour. But it cannot make good the wholesale destruc- tion and dispersal of Poland's cultural and spiritual heritage carried out during the war. Only revindication — the return of looted objects — or restitution in kind the replacement of things destroyed by things of an analogous significance to Poland — can help to make good those losses. That was where Professor Estreicher came in, and the lost music manuscripts which had accidentally fallen into Poland's hands and which, as I later discovered, Poland had hidden and held hostage since the war, under policies formu- lated and pushed by Estreicher. The deter- mination, cunning, and sheer daring with which this was done — in defiance of the Soviet Union, the Hague Convention, and Poland's Warsaw Pact ally East Germany — should give pause to the idea of linkage of Polish reparations with the Polish bor- der question or with anything else.

No one was in a better position than Karol Estreicher to know how much Po- land had lost, Or how much it wanted back when the war was over. From his base in wartime London, he was at the centre of a web of informants in occupied Europe reporting on the looting and destruction. With the war's end he published a hand- book for the use of the Allied Forces, Cultural Losses of Poland, a copy of which he gave me in Krakow. No other book on my shelves exudes so overwhelming a

sense of brutality. Out of hundreds of similar entries, take this one about Pelplin Cathedral: 'Completely looted, liturgical vessels, works of art, etc taken to nearby sugar factory and burnt in factory furnaces by order of the Gestapo commandant. Richter. He also ordered the mass-murder of all priests belonging to Pelplin Chapter'.

Pelplin Cathedral is an item in the Polish reparations list. Other entries in Estreicher's grisly catalogue fall under the heading of revindication, like the looted Greek vases of the Museum of the Czar- toryski Princes, known to scholars all over the world before the war and missing ever since, or Raphael's 'Portrait of a Young Man', looted by Hitler's gauleiter in Po- land, Hans Frank, and rumoured now to be in Australia. Estreicher's idea was to use the German music manuscripts to force from their hiding places the 40 per cent of looted Polish objects still missing today.

He had formulated his policy by 1943 when, in the United States, he suggested that German-owned art objects should be temporarily handed over to Poland and other occupied countries as guarantees for the return of looted objects. 'Only this straight way', he said, 'leads to assuring justice' — or, as he more often called it, `natural justice'. Implicit in that phrase is his sense of the short-comings of the Hague Convention and international law where Poland's case was concerned, and, study- ing his records of the German behaviour in Poland, it is difficult to disagree with him.

But with the war's end and the onset of the cold war Eistrecher's 'straight way' would be obliterated by compromise and the realities of power politics. Poland wanted to coerce Germany — but which Germany? Each was able to shuffle off responsibility on to the other. Nor was Poland, under Soviet domination and obliged to keep up appearances within the Soviet bloc, able to air its claims openly they were claims upon East as well as West Germany. And after 1953, when the Soviet

Union dropped its war reparations de- mands in the interests of Warsaw Pact unity, Poland's proposed 'straight way' was made even more crooked. Secretly, however, the German music manuscripts were hidden, and secretly the 'straight way' of revindication joined the hidden agenda of Polish foreign policy,

If Poland was prepared to tread this perilous path before Gorbachev she is unlikely to abandon it now, at a time when the prospect of a reunified Germany means that the reparations/revindication issue will be further clarified by Poland's having to address herself in future only to one nation state, not two. In fact Poland is in a better position now to press her reparations demands than at any time since the war. As the rest of Europe buries the last remains of the war's heritage this is one issue which, on the contrary, looks likely to revive, although Poland will wait until the border question is settled before pressing it. Doubtless behind Chancellor Kohl's bad timing last week was the sense that this is a propitious time for Polish reparations de- mands; he was, perhaps, trying over- ambitiously to anticipate the next big item on Poland's agenda.

And the manuscripts of Beethoven, Mozart, Bach, etc? For the last ten years Poland has made them openly available to scholars at the Jagiellonian Library in Krakow. Until recently, West and East Germany have each separately been claim- ing them and pressing Poland for their return. If and when Germany is reunified the German claim and demands for their return will be intensified, and, correspon- dingly, Poland's counter-demands for re- vindication will carry more force. Until the Poles obtain satisfaction, the Germans will continue to whistle for their music; until the music is returned a metaphysical doubt will remain that Germany has been — in a spiritual sense — fully reunified. That is something Professor Estreicher under- stood very well.

'Impressive, but what can you do apart from Ballow?'