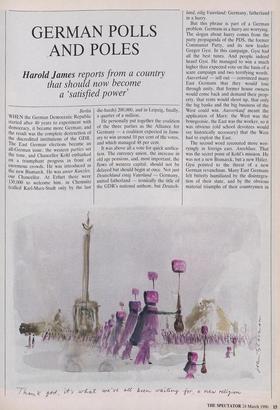 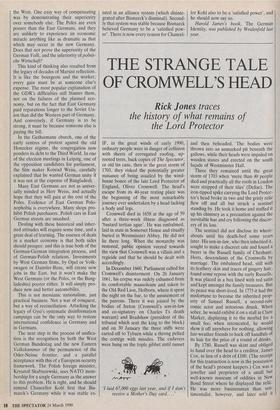 Harold James reports from a country

that should now become a 'satisfied power'

Berlin WHEN the German Democratic Republic started after 40 years to experiment with democracy, it became more German; and the result was the complete destruction the discredited institutions of the GDR. The East German elections became an all-German issue, the western parties set the tone, and Chancellor Kohl embarked on a triumphant progress in front of enormous crowds. He was introduced as the new Bismarck. He was unser Kanzler, our Chancellor. At Erfurt there were 130,000 to welcome him, in Chemnitz (called Karl-Marx-Stadt only by the last

He personally put together the coalition of the three parties as the Alliance for Germany — a coalition expected in Janu- ary to win around 10 per cent of tile votes, and which managed 48 per cent.

It was above all a vote for qiiick unifica- tion. The currency union, the increase in old age pensions, and, most important, the flows of western capital, should not be delayed but should begin at once. Not just Deutschland einig Vaterland — Germany, united fatherland — ironically the title of the GDR's national anthem, but Deutsch- land, eilig Vaterland: Germany, fatherland in a hurry.

But this phrase is part of a German problem. Germans in a hurry are worrying. The slogan about hurry comes from the party propaganda of the PDS, the former Communist Party, and its new leader Gregor Gysi. In this campaign, Gysi had all the best tunes. And people indeed heard Gysi. He managed to win a much higher than expected vote on the basis of a scare campaign and two terrifying words. Ausverkauf — sell out — convinced many East Germans that they would lose through unity, that former house owners would come back and demand their prop- erty, that rents would shoot up, that only the big banks and the big business of the West could win. Ausverkauf meant the application of Marx: the West was the bourgeoisie, the East was the worker, so it was obvious (old school devotees would say historically necessary) that the West had to exploit the East.

The second word resonated more wor- ryingly in foreign ears. Anschluss. That was the secret point of Kohl's mission. He was not a new Bismarck, but a new Hitler. Gysi pointed to the threat of a new German revanchism. Many East Germans felt bitterly humiliated by the disintegra- tion of their state, and by the obvious material triumphs of their countrymen in the West. One easy way of compensating was by demonstrating their superiority over somebody else. The Poles are even poorer than the East Germans, and they are unlikely to experience an economic miracle anything like as dramatic as that which may occur in the new Germany. Does that not prove the superiority of the German Volk, and the inferiority of polnis- che Wirtschaft?

This kind of thinking also resulted from the legacy of decades of Marxist reflection. It is like the bourgeois and the worker; every gain must be at someone else's expense. The most popular explanation of the GDR's difficulties still blames them, not on the failures of the planned eco- nomy, but on the fact that East Germany paid reparations longer to the Soviet Un- ion than did the Western part of Germany. And conversely, if Germany is to be strong, it must be because someone else is paying the bill.

In the Gethsemane church, one of the early centres of protest against the old Honecker regime, the congregation now ponders its debt to the Third World. In one of the election meetings in Leipzig, one of the opposition candidates for parliament, the film maker Konrad Weiss, carefully explained that he wanted German unity if it was not at the expense of Bangladesh.

Many East Germans are not as univer- sally minded as Herr Weiss, and actually hope that they will gain at the cost of the Poles. Evidence of East German Polo- nophobia is everywhere. Many shops pro- hibit Polish purchasers. Polish cars in East German streets are smashed.

Dealing with these historical and inher- ited attitudes will require some time, and a great deal of learning. The essence of deals in a market economy is that both sides should prosper: and this is true both of the German-German integration process, and of German-Polish relations. Investments by West German firms, by Opel or Volk- swagen or Daimler-Benz, will create new jobs in the East, but it won't make the West Germans (or the Poles, or the Bang- ladeshis) poorer either. It will simply pro- duce new and better automobiles.

This is not messianic nationalism, just practical business. Not a war of conquest, but a way of reconciliation. Attacking the legacy of Gysi's systematic disinformation campaign can be the only way to restore international confidence in Germany and in Germans.

The next step in the process of unifica- tion is the recognition by both the West German Bundestag and the new Eastern Volkskammer of the permanence of the Oder-Neisse frontier, and a parallel acceptance with this of a European security framework. The Polish foreign minister, Krysztof Skubiszewski, sees NATO mem- bership for a single Germany as the answer to this problem. He is right, and he should remind Chancellor Kohl first that Bis- marck's Germany while it was stable ex-

isted in an alliance system (which disinte- grated after Bismarck's dismissal). Second- ly that system was stable because Bismarck believed Germany to be a 'satisfied pow- er'. There is now every reason for Chancel-

lor Kohl also to be a 'satisfied power', and he should now say so.