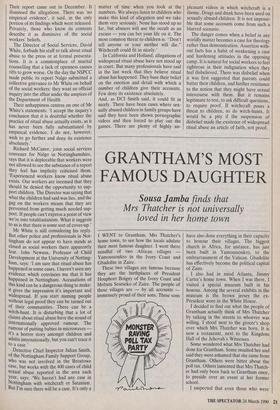 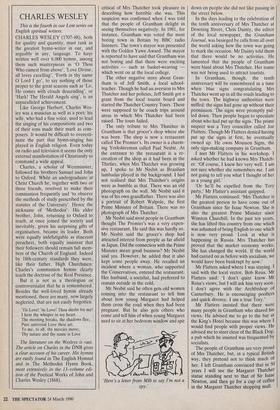 Mrs Thatcher is not universally loved in her home town

I WENT to Grantham, Mrs Thatcher's home town, to see how the locals adulate their most famous daughter. I went there mindful of two African villages Yamoussoukro in the Ivory Coast and Gbadolite in Zaire.

These two villages are famous because they are the birthplaces of President Houphoet Boigny of the Ivory Coast and Mobutu Seseseko of Zaire. The people of these villages are — by all accounts immensely proud of their sons. These sons have also done everything in their capacity to honour their villages. The biggest church in Africa, for instance, has just been built in Yamoussoukro, to the embrarrassment of the Vatican. Gbadolite has effectively become the political capital of Zaire.

I also had in mind Atlanta, Jimmy Carter's home town. When I was there, visited a special museum built in his honour. Among the several exhibits in the museum is the brown jersey the ex- President wore in the White House.

I decided to find out what the people of Grantham actually think of Mrs Thatcher by talking in the streets to whoever was willing. I stood next to the grocer's shop over which Mrs Thatcher was born. It is now a restaurant, next to the Kingdom Hall of the Jehovah's Witnesses.

Some wondered what Mrs Thatcher had done for Grantham. Some insulted her and said they were ashamed that she came from Grantham. Others were bitter about the poll tax. Others lamented that Mrs Thatch- er had only been back to Grantham once, to preside over an event at her former school.

I suspected that even those who were critical of Mrs Thatcher took pleasure in describing how horrible she was. This suspicion was confirmed when I was told that the people of Grantham delight in seeing themselves negatively. In 1981, for instance, Grantham was voted the most boring town in Britain by BBC radio listeners. The town's mayor was presented with the Golden Yawn Award. The mayor is reported to have said that Grantham was not boring and that there were exciting activities — such as basket-weaving which went on at the local college.

The other negative story about Gran- tham is of Jeff Smith, a local school- teacher. Though he had an aversion to Mrs Thatcher and her policies, Jeff Smith got a grant from the local tourist board and started the Thatcher Country Tours. These were supposed to be coach trips around areas in which Mrs Thatcher had been raised. The tours failed.

The only tribute to Mrs Thatcher in Grantham is that grocer's shop where she was born. The shop is now a restaurant called The Premier's. Its owner is a charm- ing Yorkshireman called Paul Nesbit. At the entrance to the restaurant is a re- creation of the shop as it had been in the Thirties, when Mrs Thatcher was growing up. I spoke to Mr Nesbit as Brazilian lambadas played in the background. I had not realised that Mrs Thatcher's origins were as humble as that. There was an old photograph on the wall. Mr Nesbit said it was of his own grandfather. There was also a portrait of Robert Walpole, the first Prime Minister of Britain. There was no photograph of Mrs Thatcher.

Mr Nesbit said most people in Grantham thought The Premier's was a very expen- sive restaurant. He said this was hardly so. Mr Nesbit said the grocer's shop had attracted interest from people as far afield as Japan. Did the connection with the Prime Minister mean good business? Mr Nesbit said yes. However, he added that it also kept some people away. He recalled an incident where a woman, who supported the Conservatives, entered the restaurant. Her husband, a socialist, had preferred to remain outside in the cold.

Mr Nesbit said he often gets old women coming into the restaurant to tell him about how young Margaret had helped them cross the road when they had been pregnant. But he also gets others who come and tell him of when young Margaret used to sit at her bedroom window and spit `Here's a letter from MI6 to say I'm not a spy.' down on people she did not like passing in the street below.

In the days leading to the celebration of the tenth anniversary of Mrs Thatcher at Downing Street, Chris Dainty, the editor of the local newspaper, the Grantham Journal, was besieged by calls from all over the world asking how the town was going to mark the occasion. Mr Dainty told them that there would be no activities. He lamented that the people of Grantham were blasé about Mrs Thatcher. Her name was not being used to attract tourists.

In Grantham, though, the tenth anniversary will be remembered as a time when blue signs congratulating Mrs Thatcher went up in all the roads leading to the town. The highway authorities were miffed: the signs had gone up without their permission. The signs were promptly pul- led down. Then people began to speculate about who had put up the signs. The prime suspect was a Tory councillor called Joe Flatters. Though Mr Flatters denied having put up the signs at first, he eventually owned up. He owns Mousson Signs, the only sign-making company in Grantham.

I met Mr Flatters in his workshop. I asked whether he had known Mrs Thatch- er. 'Of course, I knew her very well. I am not sure whether she remembers me. I am not going to tell you what I thought of her as a young girl.'

`Or he'll be expelled from the Tory party,' Mr Flatter's assistant quipped.

Mr Flatters continued: 'Mrs Thatcher is the greatest person to have come out of Grantham since Sir Isaac Newton. She is also the greatest Prime Minister since Winston Churchill. In the past ten years, she has lifted this country from one which was ashamed of being English to one which is now very proud. Look at what is happening in Russia. Mrs Thatcher has proved that the market economy works. She has changed the world. If the world had carried on as before with socialism, we would have been bankrupt by now.'

Mr Flatters asked where I was staying. I said with the local rector, Bob Reiss. Mr Flatters said: 'I don't quite know Mr Reiss's views, but I will ask him very soon. I don't agree with the Archbishop of Canterbury. He is encouraging poofters and quick divorce. I am a true Tory.' Mr Flatters insisted that there were many people in Grantham who shared his views. He advised me to go to the bar at the King's Hotel because this was where I would find people with proper views. He advised me to steer clear of the Black Dog, a pub which he insisted was frequented by socialists.