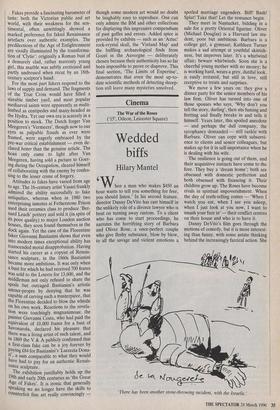 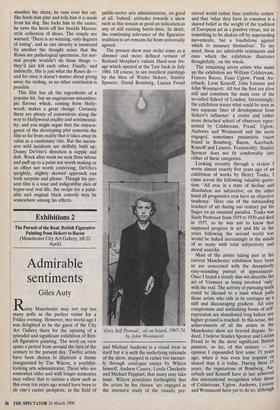 hen a man who makes $450 an hour wants to tell you something for free, you should listen.' In his second feature, director Danny DeVito has cast himself in the unlikely role of a divorce lawyer who is bent on turning away custom. To a client who has come to start proceedings, he narrates the horrifying story of Barbara and Oliver Rose, a once-perfect couple who give fleshy substance, blow by blow, to all the savage and violent emotions a spoiled marriage engenders. Biff! Bash! Splat! Take that! Let the romance begin.

They meet in Nantucket, bidding in a sale for a pretty Oriental figurine. Oliver (Michael Douglas) is a Harvard law stu- dent, poor but ambitious. Barbara is a college girl, a gymnast; Kathleen Turner makes a sad attempt at youthful skittish- ness, but improves later. It's a whirlwind affair; beware whirlwinds. Soon she is a cheerful young mother with no money; he is working hard, wears a grey, dutiful look, is easily irritated, but still in love, still receptive to treats and surprises.

We move a few years on: they give a dinner party for the senior members of his law firm. Oliver has turned into one of those spouses who says, 'Why don't you tell the story, darling', then sits fuming and fretting and finally breaks in and tells it himself. Years later, this spoiled anecdote — and perhaps the dull company, the sycophancy demanded — still rankle with Barbara. Oliver can cope with subservi- ence to clients and senior colleagues, but makes up for it in self-importance when he is dealing with his wife.

The resilience is going out of them, and their acquisitive instincts have come to the fore. They buy a 'dream home'; both are obsessed with domestic perfection and both obsessed with financing it. Their children grow up. The Roses have become rivals in spiritual impoverishment. When the day of truth-telling comes — 'When I watch you eat, when I see you asleep, when I just look at you now, I want to smash your face in' — their conflict centres on their house and who is to have it, Danny DeVito's film goes through the motions of comedy, but it is more interest- ing than funny, with some astute thinking behind the increasingly farcical action. She `There has been another stone-throwing incident, with the Israelis,' smashes the china; he runs over her cat. She, feeds him pâté and tells him it is made from his dog. She locks him in the sauna; he saws the heels off her Imelda Marcos- style collection of shoes. The couple are warned, 'There is no winning, only degrees of losing', and as one atrocity is answered by another the thought arises that the Roses are pathological specimens, for nor- mal people wouldn't do these things they'd just kill each other. Finally, and indirectly, this is just what the Roses do and for once it doesn't matter about giving away the ending, as no other conclusion is possible.

This film has all the ingredients of a popular hit, but an ungenerous misanthro- pic flavour which, coming from Holly- wood, makes a great change. Certainly there are plenty of concessions along the way to Hollywood crudity and sentimental- ity, and you might argue that the extrava- gance of the developing plot removes the film so far from reality that it takes away its value as a cautionary tale. But the succes- sive wild incidents are skilfully built up; Danny DeVito's direction is supple and deft. Week after week we seek films labour and puff up to a point not worth making or an effect not worth contriving; DeVito's sprightly, slightly skewed approach can both surprise and please. Though his pre- sent film is a sour and indigestible slice of hyper-real real life, the recipe for a palat- able and original black comedy may be somewhere among his effects.