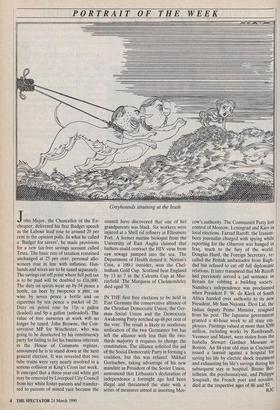 Greyhounds straining at the leash John Major, the Chancellor of the Ex- chequer, delivered his first Budget speech as the Labour lead rose to around 20 per cent in the opinion polls. In what he called a 'Budget for savers', he made provisions for a new tax-free savings account called Tessa. The basic rate of taxation remained unchanged at 25 per cent; personal allo- wances rose in line with inflation. Hus- bands and wives are to be taxed separately. The savings cut-off point where full poll tax is to be paid will be doubled to £16,000. The duty on spirits went up by 54 pence a bottle, on beer by twopence a pint, on wine by seven pence a bottle and on cigarettes by ten pence a packet of 20. Duty on petrol rose by 1 1p a gallon (leaded) and 9p a gallon (unleaded). The value of free nurseries at work will no longer be taxed. John Browne, the Con- servative MP for Winchester, who was going to be deselected by his constituency party for failing to list his business interests in the House of Commons register, announced he is to stand down at the next general election. It was revealed that two tube trains were very nearly involved in a serious collision at King's Cross last week. It emerged that a three-year-old white girl may be removed by Liverpool City Council from her white foster-parents and transfer- red to parents of mixed race because the

council have discovered that one of her grandparents was black. Six workers were injured at a Shell oil refinery at Ellesmere Port. A former marine biologist from the University of East Anglia claimed that bathers could contract the HIV virus from raw sewage pumped into the sea. The Department of Health denied it. Norton's Coin, a 100-1 outsider, won the Chel- tenham Gold Cup. Scotland beat England by 13 to 7 in the Calcutta Cup at Mur- rayfield. The Marquess of Cholmondeley died aged 70.

IN THE first free elections to be held in East Germany the conservative alliance of the Christian Democratic Union, the Ger- man Social Union and the Democratic Awakening Party notched up 48 per cent of the vote. The result is likely to accelerate unification of the two Germanies but has left the alliance with less than the two- thirds majority it requires to change the constitution. The alliance solicited the aid of the Social Democratic Party in forming a coalition, but this was refused. Mikhail Gorbachev, taking advantage of his new mandate as President of the Soviet Union, announced that Lithuania's declaration of independence a fortnight ago had been illegal and threatened the state with a series of measures aimed at asserting Mos-

cow's authority. The Communist Party lost control of Moscow, Leningrad and Kiev in local elections. Farzad Bazoft, the Iranian- born journalist charged with spying while reporting for the Observer was hanged in Iraq, much to the fury of the world. Douglas Hurd, the Foreign Secretary, re- called the British ambassador from Bagh- dad but refused to cut off full diplomatic relations. It later transpired that Mr Bazoft had previously served a jail sentence in Britain for robbing a building society. Namibia's independence was proclaimed when President F. W. de Klerk of South Africa handed over authority to its new President, Mr Sam Nujoma. Devi Lal, the Indian deputy Prime Minister, resigned from his post. The Japanese government granted a 40-hour week to all state em- ployees. Paintings valued at more than $200 million, including works by Rembrandt, Vermeer and Manet, were stolen from the Isabella Stewart Gardner Museum in Boston. An 84-year old man in Cincinatti issued a lawsuit against a hospital for saving his life by electric shock treatment and exhausting his life's savings during his subsequent stay in hospital. Bruno Bet- telheim, the psychoanalysist, and Philippe Soupault, the French poet and novelist, died at the respective ages of 86 and 92.