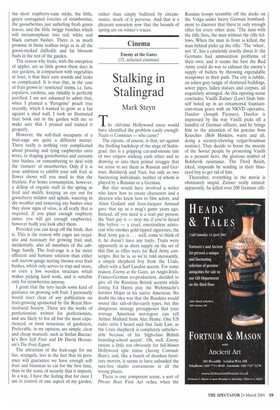 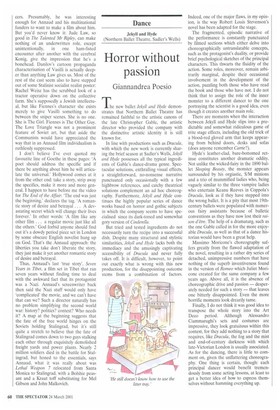 Enemy at the Gates (15, selected cinemas)

The old-time Hollywood execs would have identified the problem easily enough: Nazis vs Commies — who cares?

The riposte, of course, is that, set against the thrilling backdrop of the siege of Stalingrad, this is a gripping cat-and-mouse tale of two snipers stalking each other and so drawing us into their primal struggle that we cease to see them as Russian and German, Bolshevik and Nazi. but only as two fascinating individuals, neither of whom is played by a Russian or a German.

But that would have involved a writer who knew how to create characters and a director who knew how to film actors, and Alain Godard and Jean-Jacques Annaud gave that up as a mug's game years ago. Instead, all you need is a trait per person: the Nazi guy is — stop me if you've heard this before — a cruel, emotionless aristocrat who smokes gold-tipped cigarettes; the Red Army guy is. . . well, come to think of it, he doesn't have any traits. Traits were apparently in as short supply on the set of this film as rifles were for Red Army conscripts. But he is, so we're told incessantly, a simple shepherd boy from the Urals, albeit with a Sarf Landon accent. For some reason, Enemy at the Gates, an Anglo-IrishFranco-German co-production, decided to give all the Russians British accents while letting Ed Harris play the Wehrmacht's hotshot Major in his native American. No doubt the idea was that the RussIdes would sound like salt-of-the-earth types, but this dangerous strategy presupposes that your average American moviegoer can tell Arthur Mullard from Alec Home. One US radio critic I heard said that Jude Law, as the Urals shepherd, is completely unbelievable because of his 'high-class British boarding-school accent'. Oh, well. Enemy strains a little too obviously for full-blown Hollywood epic status (Saving Comrade Ryan), and, like a bunch of drunken furniture movers, it seems to have unloaded the sure-fire studio conventions in all the wrong places.

There is one competent scene, a sort of Private Ryan First Act redux, when the

Russian troops scramble off the docks on the Volga under heavy German bombardment to discover that there're only enough rifles for every other man. 'The man with the rifle fires, the man without the rifle follows. When the man in front is killed, the man behind picks up the rifle.' The `when', not 'if, has a carelessly cruelty about it: the Germans had ammunition problems of their own, and it seems the best the Red Army could do was to exhaust the enemy's supply of bullets by throwing expendable manpower in their path. The city is rubble, an ashen grey tangle of shattered buildings, sewer pipes, fallen statues and corpses, all exquisitely arranged. As this opening scene concludes, Vasilli Zaitsev (Law) finds himself holed up in an ornamental fountaincum-mass grave with an NKVD operative, Danilov (Joseph Fiennes). Danilov is impressed by the way Vasilli picks off a handful of German officers, and he brings him to the attention of his porcine boss Kruschev (Bob Hoskins, warts and all, doing a scenery-chewing vulgar-boatman routine). They decide to boost the morale of the Soviet people by promoting Vasilli as a peasant hero, the glorious symbol of Bolshevik resistance, The Third Reich, irked, responds by sending in their blueeyed boy to get rid of him.

Thereafter, everything in the movie is obstinately stupid. Zaitsev really existed: apparently, he killed over 200 German offi cers. Presumably, he was interesting enough for Annaud and his multinational funders to want to make a film about him. But you'd never know it: Jude Law, so good in The Talented Mr Ripley, can make nothing of an underwritten role, except unintentionally, in one ham-fisted encounter after another with the cerebral Konig, give the impression that he's a bonehead. Danilov's cartoon propaganda characterisation of Vasilli is actually deeper than anything Law gives us. Most of the rest of the cast seem also to have stepped Out of some Stalinist socialist realist poster: Rachel Weisz has the scrubbed look of a tractor operative down on the collective farm. She's supposedly a Jewish intellectual, but like Fiennes's character she exists merely to give Vasilli something to do between the sniper scenes. She is no one. She is The Girl. Fiennes is The Other Guy. The Love Triangle was not a prominent feature of Soviet art, but that aside the Communists would have appreciated the way that in an Annaud film individualism is ruthlessly suppressed.

I don't believe I've ever quoted my favourite line of Goethe in these pages: 'A poet should address the specific and if there be anything about him he will articulate the universal.' Hollywood comes at it from the other end: take a story, strip away the specifics, make it more and more general. I happen to have before me the video for The End of the Affair: 'The end was just the beginning,' declares the tag. 'A romantic story of desire and betrayal . .. A devastating secret which will change their lives forever.' In other words: 'A film like any other film . .. a regular movie just like all the others.' God forbid anyone should find out it's a dowdy period piece set in London by some obscure English novelist hung up on God. That's the Annaud approach: the liberties you take don't liberate the story, they just make it yet another romantic story of desire and betrayal.

Thus. Annaud's last 'true story', Seven Years in Tibet, a film set in Tibet that ran seven years without finding time to deal with the awkward fact that its protagonist was a Nazi. Annaud's screenwriter back then said the Nazi stuff would only have 'complicated' the movie, and we can't have that can we? Such a director naturally has no problem simplifying the second world war: history? politics? context? Who needs it? A map at the beginning suggests that the fate of the free world hinges on the Soviets holding Stalingrad, but it's still quite a stretch to believe that the fate of Stalingrad comes down to two guys stalking each other through exquisitely demolished freight yards and power plants. Nearly 2 million soldiers died in the battle for Stalingrad, but honed to the essentials, says Annaud, what it was really about was Lethal Weapon 7 relocated from Santa Monica to Stalingrad, with a Bolshie peasant and a Kraut toff substituting for Mel Gibson and John Malkovich.