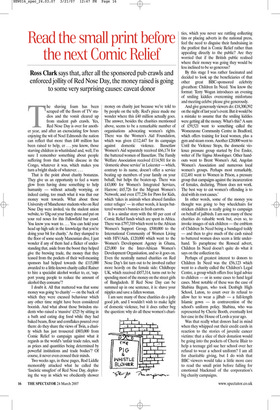 Read the small print before the next Comic Relief

Ross Clark says that, after all the sponsored pub crawls and enforced jollity of Red Nose Day, the money raised is going to some very surprising causes: caveat donor The shaving foam has been scraped off the floors of TV studios and the vomit cleared up from student pub crawls. Yes, Red Nose Day is over for another year, and after an excruciating few hours enjoying the wit of Noel Edmonds the nation can reflect that more than £40 million has been raised to help, er ... you know, those starving children in whatitsland and, well, I’m sure I remember something about people suffering from that horrible disease in the Congo, whatever it was, which makes you turn a bright shade of whatever....

That is the point about charity bonanzas. They give us an opportunity to feel a warm glow from having done something to help humanity — without actually worrying, or indeed caring, too much what it was that our money went towards. What about those University of Manchester students who on Red Nose Day were invited, via the student union website, to ‘Dig out your fancy dress and put on your red noses for this Fallowfield bar crawl. You know you want to.... You can hold your head up high safe in the knowledge that you’re doing your bit for charity.’ As they slumped to the floor of some seedy Mancunian dive, I just wonder if any of them had a flicker of understanding that, aside from the boost they helped give the brewing trade, the money that they teased from the pockets of their well-meaning sponsors had helped towards the £115,000 awarded to a little-known charity called Rainer to hire a specialist alcohol worker to, er, ‘support young people to reduce the amount of alcohol they consume’?

I doubt it. All that mattered was that some money was going ‘to charity’ — on the back of which they were excused behaviour which any other time might have been considered boorish. And what about those Swindon students who raised a ‘massive’ £525 by sitting in a bath and eating dog food while they had baked beans, flour and cornflakes poured over them: do they share the views of Twin, a charity which has just trousered £803,000 from Comic Relief to campaign against what it regards as the world’s ‘unfair trade rules, such as prices and quantities being determined by powerful institutions and trade bodies’? Of course, it never even crossed their minds.

Two weeks ago, in these pages, Rod Liddle memorably attacked what he called the ‘fascistic smugfest’ of Red Nose Day, deploring the way in which we obediently shower money on charity just because we’re told to by people on the telly. Rod’s piece made me wonder where this £40 million actually goes. The answer, besides the charities mentioned above, seems to be a remarkable number of organisations advocating women’s rights. There was the Women’s Aid Foundation, which was given £112,447 for its campaign against domestic violence. Bassetlaw Women’s Aid separately received £66,174 for the battered women of Bassetlaw. The Family Welfare Association received £114,501 for its ‘domestic abuse service’ in Leicester — which, contrary to its name, doesn’t offer a service beating up members of your family on your behalf, but helps the beaten-up. There was £43,000 for Women’s Integrated Services, Harrow; £65,726 for the Migrant Women’s Network; and even £77,236 for Paws for Kids, which ‘takes in animals when abused families enter refuges’ — in other words, it keeps battered women’s bunnies in fresh carrots.

It is a similar story with the 60 per cent of Comic Relief funds which are spent in Africa. There was £797,310 which went to the African Women’s Support Group, £500,000 to the International Community of Women Living with HIV/Aids, £120,000 which went to the Women’s Development Agency in Ghana, £25,000 for the Inter-African Women’s Development Organisation, and so it goes on. Even the neutrally named charities on Red Nose Day’s list turn out to be involved rather more heavily on the female side: Childhope UK, which received £857,314, turns out to be spending most of the money on the street girls of Bangladesh. If Red Nose Day can be summed up in one sentence, it is: shave your nipples and save a fallen woman.

I am sure many of these charities do a jolly good job, and I wouldn’t wish to make light of domestic violence, but it does rather beg the question: why do all these women’s chari ties, which you never see rattling collecting tins or placing adverts in the national press, feel the need to disguise their fundraising in the pratfest that is Comic Relief rather than appealing directly to the public? Are they worried that if the British public realised where their money was going they would be less inclined to be so generous?

By this stage I was rather fascinated and decided to look up the beneficiaries of that other great BBC-sponsored celebrity giveathon: Children In Need. You know the format: Terry Wogan introduces an evening of smiling kiddies overcoming misfortune and meeting celebs: please give generously.

And give generously viewers do: £18,300,392 on the night of last year’s event. But it would be a mistake to assume that the smiling kiddies were getting all the money. What’s this? A sum of £59,521 went to something called the Womenzone Community Centre in Bradford, which offers training for local women, plus a gym and steam room. Another £20,000 went to Until the Violence Stops, the domestic violence pressure group started by Eve Ensler, writer of The Vagina Monologues. Other handouts went to Brent Women’s Aid, Angolan Women’s Association and numerous local women’s groups. Perhaps most remarkably, £12,481 went to Women in Prison, a pressure group that campaigns against the incarceration of females, declaring, ‘Prison does not work. The best way to cut women’s offending is to deal with its root causes.’ In other words, some of the money you thought was going to buy wheelchairs for stricken children is really going to campaign on behalf of jailbirds. I am sure many of these charities do valuable work but, even so, to invoke images of sick children — the emblem of Children In Need being a bandaged teddy — and then to give much of the cash raised to battered women does seem a little underhand. To paraphrase the Ronseal advert, Children In Need doesn’t quite do what it says on the collection tin.

Perhaps of greatest interest to donors to Children In Need was the £56,123 which went to a charity called the Children’s Legal Centre, a group which offers free legal advice to children — or in some cases to fund legal cases. Most notable of these was the case of Shabina Begum, who took Denbigh High School, Luton, to court over its refusal to allow her to wear a jilbab — a full-length Islamic gown — in contravention of the school’s uniform policy. Shabina, who was represented by Cherie Booth, eventually lost her case in the House of Lords a year ago.

Was that really what donors had in mind when they whipped out their credit cards in reaction to the stories of juvenile cancer victims: that a slice of their donation would be going into the pockets of Cherie Blair to help a teenage girl sue her school over her refusal to wear a school uniform? I am all for charitable giving, but I do wish that BBC viewers would take a little more care to read the small print before falling for emotional blackmail of the corporation’s big charity campaigns.