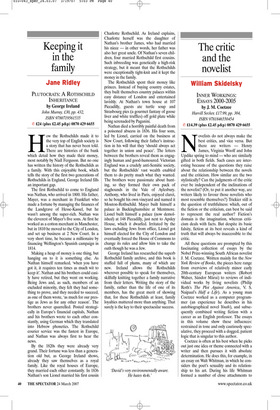 Keeping it in the family

PLUTOCRATS: A ROTHSCHILD INHERITANCE by George Ireland John Murray, £30, pp. 432, ISBN 9780719561535 ✆ £24 (plus £2.45 p&p) 0870 429 6655 How the Rothschilds made it to the very top of English society is a story that has never been told. There are histories of the bank which detail how they made their money, most notably by Niall Ferguson. But no one has written the history of the Rothschilds as a family. With this enjoyable book, which tells the story of the first two generations of Rothschilds in England, George Ireland fills an important gap.

The first Rothschild to come to England was Nathan, who arrived in 1800. His father, Mayer, was a merchant in Frankfurt who made a fortune by managing the finances of the Landgrave of Hesse-Kassel, but he wasn’t among the super-rich. Nathan was the cleverest of Mayer’s five sons. At first he worked as a cotton merchant in Manchester, but in 1810 he moved to the City of London, and set up business at 2 New Court. In a very short time, he became a millionaire by financing Wellington’s Spanish campaign in 1814.

Making a heap of money is one thing, but hanging on to it is something else. As Nathan himself remarked, ‘when you have got it, it requires ten times as much wit to keep it’. Nathan and his brothers could easily have retired, but they went on working. Being Jews and, as such, members of an excluded minority, they felt they had something to prove, and they needed to succeed, as one of them wrote, ‘as much for our prestige as Jews as for any other reason’. The brothers never quarrelled. Posted strategically in Europe’s financial capitals, Nathan and his brothers wrote to each other constantly, using German which they translated into Hebrew phonetics. The Rothschild courier service was the fastest in Europe, and Nathan was always first to hear the news.

By the 1820s they were already very grand. Their fortune was less than a generation old but, as George Ireland shows, already they saw themselves as a royal family. Like the royal houses of Europe, they married each other constantly. In 1836 Nathan’s son Lionel married his first cousin Charlotte Rothschild. As Ireland explains, Charlotte herself was the daughter of Nathan’s brother James, who had married his niece — in other words, her father was also her great uncle. Of Nathan’s seven children, four married Rothschild first cousins. Such inbreeding was genetically a high-risk strategy, but it meant that the Rothschilds were exceptionally tight-knit and it kept the money in the family.

The Rothschilds spent their money like princes. Instead of buying country estates, they built themselves country palaces within easy distance of London and entertained lavishly. At Nathan’s town house at 107 Piccadilly, guests ate turtle soup and Strasbourg pies (a gourmet fantasy of goose liver and white truffles) off gold plate while being serenaded by Paganini.

Nathan died a horribly painful death from a poisoned abscess in 1836. His four sons, led by Lionel, carried on the business at New Court, following their father’s instruction in his will that they ‘should always act together in union and peace’. The letters between the brothers reveal them as engagingly human and good-humoured. Victorian England was a crudely anti-Semitic society, but the Rothschilds’ vast wealth enabled them to do pretty much what they wanted. The brothers were passionate about hunting, so they formed their own pack of staghounds in the Vale of Aylesbury. Anthony, who lived in Paris, enjoyed claret, so he bought his own vineyard and named it Mouton-Rothschild. Mayer built himself a palace in Buckinghamshire at Mentmore. Lionel built himself a palace (now demolished) at 148 Piccadilly, just next to Apsley House, which it dwarfed. Irritated by the laws excluding Jews from office, Lionel got himself elected for the City of London and eventually forced the House of Commons to change its rules and allow him to take the oath though he was a Jew.

George Ireland has researched the superb Rothschild family archive, and this book is stuffed full of plums, many of which are new. Ireland allows the Rothschilds wherever possible to speak for themselves, skilfully knitting together a family narrative from their letters. Writing the story of the family, rather than the life of one of its members, has the great merit of showing that, for these Rothschilds at least, family loyalties mattered more than anything. That surely is the key to their spectacular success.