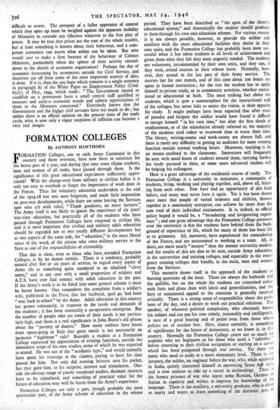 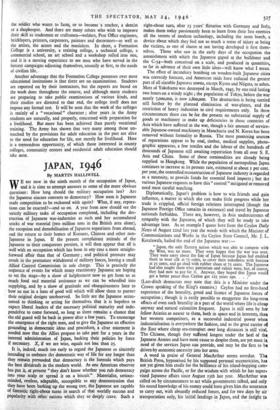 .FORMATION Colleges, one to each Army Command in this country and three overseas, have now been in existence for the better part of a year, and during that time some 18,000 students, men and women of all ranks, have passed through them. Is the significance of this great educational expeciment sufficiently appre- ciated? With the change-over from military to civilian habits it is only too easy to overlook or forget the importance of work done in the Forces. Thus the voluntary education undertaken at the end of the 1914-18 war was soon forgotten, and made little impression on post-war developments, while there are some leaving the Services now who cry with relief, "Thank goodness, no more lectures." The Army itself is not likely to ignore the experience of six years' war-time education, but practically all of the students who have passed through Formation Colleges have returned to civilian life, and it is most important that civilian and military adult education should be regarded not as two totally different developments but as two aspects of the same task, the "education," in the most liberal sense of the word, of the citizen who owes military service to the State as one of the responsibilities of citizenship.

That this is clear, even to those who have,attended Formation Colleges, is by no means certain. There is a tendency, probably natural after five or six years of service, to regard every aspect of Army life as something quite unrelated to an idealised " civvy street," and in any case only a small proportion of soldiers and A.T.S. have ever had contact with adult education in the past. If the Army's work is to be fitted into some general scheme it must be better known. One remembers the complaint from a soldier's wife, published in the Press; that her husband, aged 40, had been "sent back to school" by the Army. Adult education in this country has grown voluntarily, in response to the needs and demands of the students ; it has been essentially, a co-operative enterprise. But the number of people who are aware of their needs is not particu- larly high, and there is a real significance in John Burns's old phrase about the "poverty of desires." How many soldiers have learnt from opera-going in Italy that great music is not necessarily an insincere " highbrow " cult? Recently a student at a Formation College expressed his appreciation of evening functions, outside the immediate scope of his own studies, some of which he was expected to attend. He was not of the "academic type," and would normally have spent his evenings at the cinema, paying to have his time passed for him. Not only did evening lectures save his pocket, but they gave him, to his surprise, interest and stimulation. Out- side the obvious range of purely vocational studies, dormant interests have to be stimulated, and something of practical value for the future of education may well be learnt from the Army's experience.

Formation Colleges are only a part, though probably the most spectacular part, of the Army scheme of education in the release period. They have been described as "the apex of the Army's educational system," and theoretically the student should graduate to them through his own unit education scheme. For various reasons it is not always possible, , however, to provide the soldier and auxiliary with the exact educational facilities they desire in their own units, and the Formation College has probably been most suc- cessful when it has taken students at all levels of achievement and given them what they felt they most urgently needed. The students are volunteers, recommended by their own units, and they can, if they wish, attend courses in their release leave. Normally, how- ever, they attend in the last part of their Army service. The courses last for one month, and of this time about too hours are spent in formal instruction ; for the rest the student has to apply himself to private study, or to community activities, whether recrea- tional or educational or both. The most striking fact about the students, which is now a commonplace for the instructional staff of the colleges, but never fails to excite the visitor, is their appetite for study. It might perhaps have been expected that after years of parades and fatigues the soldier, would have found it difficult to occupy himself " in his own time," but after the first shock of readjustment, or of the stimulation already referred to, the majority of the students tend rather to overwork than to waste their time. The library, writing-rooms and work-rooms are always full, and there is rarely any difficulty in getting an audience for some evening function outside normal working hours. Moreover, teaching is by no means confined to the classroom. Instructors will frequently be seen with small knots of students around them, carrying further the study pursued in class, or some more advanced student will be helping his colleagues.

Here is a great advantage of the residential course of study. The Formation College is a university in miniature a community of students, living, working and playing together, and, above all, learn- ing from each other. Few have had an opportunity of this kind before, and many may never have it again. Yet it has been shown once more that people of varied interests and abilities, thrown together in a community enterprise, can achieve far more than the sum total of their individual attainments. It is, indeed, as official policy hoped it would be, a "broadening and invigorating experi- ence " • and one great advantage that the Formation College possesses over die university is that the students have behind them the back- ground of experience of life, which for many of them has been life at its grimmest. All, moreover, have experienced the comradeship of the Forces, and are 'accustomed to working as a team. All, in short, are more nearly "mature" than the normal university student, and the results of this are also to be seen, outside Army education, in the universities and training colleges, and especially in the emer- gency training colleges that handle, in the main, men and women from the Services.

This maturity shows itself in the approach of the students to burning questions of the hour. There are always the hotheads and the gullible, but on the whole the students are concerned rather with facts and plans than with labels and generalisations, and the fiery or sentimental appeal to the emotions is generally received critically. There is a strong sense of responsibility about the prob- lems of the day, and a desire to work out practical solutions. The speaker, of whatever political complexion, who obviously knows his subject and can put his case calmly, reasonably and intelligently, is sure of a good hearing and of praise even from those whoce politics are of another hue. Here, almost certainly,. is something of significance for the future of democracy, as we know it, in this country. Normally the Formation College caters not so much loT students who are beginners as for those who need a "refresher before returning to their civilian occupation or starting on a career which has been' postponed through war service. Yet there are many who need to study at a more elementary level. There is, lot instance, the soldier, an engineer before the war, who, while stationed in India, quietly interested himself in excavating Stone AO sites, and is now anxious to take up a career in archaeology. There is the former prisoner of war who learnt some Russian, German or Italian in captivity and wishes to improve his knowledge of the language. There is the auxiliary, a university graduate, who is about to marry and wants to learn something of the domestic arts, Or the soldier who wants to farm, or to become a teacher, a dentist or a shopkeeper. And there are many others who wish to improve their skill as tradesmen or craftsmen—welders, Post Office engineers, bricklayers, printers, carpenters, painters and decorators—as well as the artists, the actors and the musicians. In short, a Formation College is a university, a training college, a technical college, a commercial school, an art school and a workshop rolled into one, and it is a moving experience to see men who have served in the fiercest campaigns adjusting themselves, uneasily at first, to the needs of civilian life. _ Another advantage that the Formation College possesses over most educational institutions is that there are no examinations. Students are reported on by their instructors, but the reports are based on the work done throughout the course, and although many students are preparing to take public examinations of various kinds, and their studies are directed to that end, the college itself does not impose any formal test. It will be seen that the work of the colleges is mainly of a "vocational" character ; after years in the Army students are naturally, and properly, concerned with preparation for a livelihood. But more has been achieved than purely vocational training. The Army has shown that very many among those un- touched by the provisions for adult education in the past are alive to the need for education for life, not merely for livelihood. Here is a tremendous opportunity, of which those interested in county colleges, community centres and residential adult education should take note.